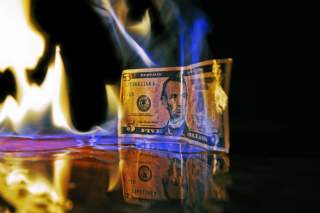 Referring to gold and all physical money as a “barbarous relic” (a phrase “coined” … please excuse the misuse of the term … by Lord Keynes, see Monetary Reform (1924), p. 172) is the favorite pastime of gold-bashers and fiat currency worshippers everywhere. In attempting to convince the public that real, hard money should be an object of derision, fiat fanatics, some wittingly and some unwittingly, are advancing the cause of “statism” (socialism and fascism) and its American analogue “cronyism”.

Money (gold and silver used as currency) was conceived to be both a “battery” and a “time machine”.  As a battery, real money stored an individual’s labor and allowed that individual to trade that stored labor for a good or service provided by an individual who neither needed nor desired the laborer’s specific output.  A man who built barrels and who wanted fish did not have to seek out a fisherman who wanted a barrel.  As a time machine, money preserved the value of the individual’s labor over his lifetime, so that it could be “spent” when that laborer was no longer able to produce (either efficiently or at all). Because of its function as both a short term and long term labor storage device, real money was a fundamental building block of a free society.  (This is not to suggest that real money was a sufficient condition for a free society, but real money is necessary to preserve the freedom of a society.)

Real money performed its dual function perfectly for thousands of years, whenever governments and central banks did not control it. Now, under the complete control of central banks, money, i.e., its modern analogue, fiat money, no longer is an efficient battery. Given the loss of fiat currency’s purchasing power (96% loss since 1913 - see this) since the advent of the Fed, money no longer is a time machine.

Money has been transformed from an object with no counterparty risk, the value of which was determined by the market process of free exchange, into a tool of central economic (and thereby societal) command.  Worse, that command is implemented with neither democratic check nor balance, but by autocratic force and decree. The force employed by, and on behalf of, central banks (by governments), and the decrees of central banks are disruptive to the market process, and, ultimately, are ruinous to the freedom of society.

Before central banking, physical gold or physical silver was exchanged for goods and services.  The Bank of England altered this exchange process in 1694 by creating a money substitute called the “banknote”.

But banknotes were merely paper representations of gold or silver; they were not tangible assets. They were not “money” itself.

Why is a banknote not “money”?  Because a banknote is merely the liability of the bank issuing that paper currency. It is an “account receivable” in the hands of its holder and an “account payable” by the bank.  Sure, if there is gold or silver backing up each and every banknote issued (i.e., a “100% reserve”), then the risk of non-payment, i.e., the risk of non-conversion to “real money”, is nearly zero.  But there’s the rub.  Banks issuing banknotes began employing “fractional reserve banking”.  They issued more banknotes than the gold or silver they held in their vaults. That introduced payment risk, the risk that there might be no “real money” when the recipient of the banknote attempted to exchange the banknote for real money (the gold or silver “backing” the banknote). This “money failure risk” did not exist when tangible assets (e.g., gold and silver coins) were used as currency. Of course, since August 15, 1971, with the closure of the “gold convertibility window”, forced on President Nixon by LBJ’s abandoning all reserve requirements for gold backing of the U.S. Dollar in March of 1968, the “money failure risk” became substantial, and even likely over time.

Central banks’ control over the fiat money supply has transformed market economies into top down, command economies. It is laughable when TV commentators, media columnists and “Occupy Wall Street” protesters blame free market capitalism for the serial economic “busts” experienced in 1987 (“Black Monday” market crash by 22.6%), 1999-2000 (the “dot-com” bubble) and 2008 (the “housing bubble”). In fact, there has been no free market in the United States since 1913, when the Fed was established. Indeed, the Fed’s power of command over the economy increased exponentially with the enshrinement of 100% fiat money in August of 1971.

Even worse, the central bank’s digital money creation, not backed by real assets, creates inflation, best described not as “rising prices” but as the reduction in value of all pre-existing money. By this inflationary process, central banks enable governments to steal from their citizens. Central bank-induced inflation is a silent tax for which no citizen voted.

Adding insult to injury, central banks arrogantly deny that their money creation causes inflation. The Fed routinely points to a “CPI” that has not even averaged 2% per year since 2008, even as stock prices have tripled, as wave after wave of QE dollars have poured into the equity markets. But market participants outside the Fed are completely oblivious to the deliberations of the Fed. As a result, honest price discovery in an open securities market is impossible. Instead of looking to the actual supply of and demand for money and actual profits and losses of corporations, investors must be fixated on what the Fed might do in order to divine the direction of markets. There is no longer a “stock market”; there is only a “Fed market”.  Market participants are not investors; they have been reduced to casino gamblers wondering “WWJD” (“What will Janet Do?”).

The mountain of debt that exists in the United States today and the mal-investment (e.g., stratospheric stock prices beginning to falter, defaulting fracking company junk bonds, student loan debt that cannot be serviced by jobless graduates and escalating subprime auto loans) emanating therefrom are the direct result of the Fed’s money printing and bond buying (QE) activity. That mountain of debt is like a plate spinning on the top of a stick.  Even more debt must be incurred to keep the plate spinning. It is the only way to (try to) avoid the inevitable bust that would follow, if debt expansion were to stop. It was exactly this inflate or die policy which resulted in former Fed Chairman Ben Bernanke’s infamous quip that he would drop Federal Reserve Notes from helicopters if necessary to re-inflate the economy.

But, ultimately, the credit-based money system run by the central banks has no exit …other than collapse.  There is no conceivable way that the taxpayers and borrowers of the world ever will be able to pay off the hundreds of trillions of dollars (and dollar equivalents) in accumulated government debt (more than $56 Trillion in direct government debt) and personal and corporate debt.  There is no way even to service those debts (i.e., pay current interest due to bondholders), if interest rates increase to even half of their average historic levels.

There are only two options, both of which see horrendous. The first is “honest” default.  Governments admit that their debts cannot be repaid, and the governments default.  (This is what has happened in Puerto Rico, which cannot print up its own money.)  Debt holders (including individuals, pension plans, banks and insurance companies) then lose their investments in government debt. Worldwide hyper-deflation and deep depression follow. Office holders lose their positions, government employees are fired and entitlement programs collapse.  Rioting and lawlessness result.

The second is a “stealth” default by even more aggressive money printing. Debts are repaid in worthless money. Bondholders lose all of their investments’ purchasing power. Hyperinflation, Weimar-style, follows, and efficient production is curtailed as people spend all of their time trying to exchange increasingly worthless fiat currency for tangible goods. Economies fail, unemployment skyrockets and there is worldwide depression.  Rioting and lawlessness result.