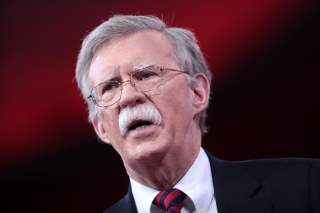 As first reported by The National Interest on January 26, John Bolton has long been the leading candidate to replace H.R. McMaster as national security advisor.

On Thursday evening, the president made it official, tweeting: “I am pleased to announce that, effective 4/9/18, @AmbJohnBolton will be my new National Security Advisor. I am very thankful for the service of General H.R. McMaster who has done an outstanding job & will always remain my friend. There will be an official contact handover on 4/9.”

For Bolton, it marks the official comeback from ignominy and, at 69, career salvation. Bolton has been out of government since 2006, when he resigned the administration of then-President George W. Bush at the end of the year after the Democrats had stormed to power in Congress in November. He had been a controversial pick for U.N. ambassador even under the neoconservative Bush and a Republican-controlled Congress: 43 was forced to appoint him in recess in 2005 and his continued service was untenable once the GOP lost the Senate.

Since his departure, he’s become a Fox News star and seriously weighed presidential bids in 2012 and 2016.

In January, I reported that the Pentagon was looking around for a four star slot for McMaster, an active lieutenant general, to fill. My sources indicated that Secretary of Defense Jim Mattis was skeptical of McMaster taking on a four star role-- and I later learned he was deeply suspicious of Bolton.

Says a White House official: “The president and General H.R. McMaster mutually agreed that General McMaster will resign as the National Security Advisor. McMaster will retire from the U.S. Army after 34 years of distinguished service.” The official noted: “The two have been discussing this for some time. The timeline was expedited as they both felt it was important to have the new team in place, instead of constant speculation.”

McMaster or an ally, principally National Security Council spokesman Michael Anton, have been widely suspected in the media as behind an embarrassing leak against the president related to his recent call with Russian President Vladimir Putin, when Trump ignored instructions in front of him not to congratulate Putin on his recent reelection. “This was not related to any one moment or incident,” assured the official.

A source close to Anton says the NSC spokesman has been telling all interested parties that Bolton would never get the job. Anton publicly denied my report on Hugh Hewitt’s radio show when it was published.

The truth is Bolton has been angling to enter Trump’s inner circle for some time. Former White House Chief Strategist Steve Bannon favored Bolton for a senior role during the presidential transition. Bolton was considered for secretary of state, deputy secretary of state (which Rex Tillerson quashed) and NSA, but was passed on in the first round. And he was passed over again when Michael Flynn was replaced for McMaster.

But Bolton has been persistent, and has waged a clever campaign for the job he’s long desired. He has often taken to the air and radio waves, and the op-ed pages, when he’s been outside Trump’s attention for too long. Even Thursday, Bolton had just appeared on the midday Fox News show “OutNumbered.” Shortly thereafter, Bolton was seen walking to the Oval. After getting the nod, Bolton said on Fox Thursday night that he hadn’t expected the news “this afternoon.” Similarly, I reported in August that, at the behest of Bannon, Bolton published his plan for exiting the Iran Deal in conservative mainstay National Review; at the time, Bolton was publically complaining he couldn’t get a meeting with President Trump. That plan was later endorsed by hardliner Frank Gaffney and his outfit, the Center for Security Policy. Personnel-wise, alums of Gaffneyworld seem to float in and out of Boltonworld.

Trump, of course has been stridently critical of the Bush administration, as has Bannon. Bannon told me in August that Bolton has converted “from being a Bush guy to being a Trump guy.” Bolton defeated other candidates for the job, including the NSC chief of staff, General Keith Kellogg, and Stephen Biegun, a former NSC official under Bush favored by neocons and allies of Sen. John McCain.

Though unquestionably an interventionist -- and far more interventionist than Bannon -- Bolton is not a neoconservative, but rather, a conservative hawk, like Hewitt. For instance, Bolton opposed the overthrow of Egyptian strongman Hosni Mubarak earlier this decade: he’s ambivalent on democratization, though he’s consistently defended the Iraq excursion, including most recently in a tense interview on the show of intervention skeptic Tucker Carlson. Carlson seemed almost trying to sabotage Bolton with a president who closely monitors cable television.

Bolton reportedly promised President Trump he wouldn’t start a war if he accepted this position. Bolton is “a smart, highly-competent, nice guy,” a former State Department official from the Bush administration told me in January. According to the official, apparently approvingly: “His worldview is utterly lacking in empathy.”