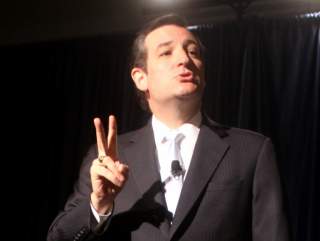 American politics has a new celebrity marriage. Ted Cruz and John Kasich announced last week they were forming a strategic alliance to counter Donald Trump. Call it Crusich—and unlike the abbreviated marital banalities that come out of Hollywood, this one had a useful purpose: stopping Trump from reaching 1,237 delegates.

Under Crusich’s terms, anti-Trump Republicans would vote Kasich if they live in New England, New Mexico, and Oregon, and vote Cruz if they live in Pennsylvania and Indiana. It makes sense if you’re in Cruz’s and Kasich’s position, which is to say, plastered against the wall with a snarling Trump closing in. But cracks immediately appeared. Kasich announced he wouldn’t command his supporters to vote for Cruz, which dashed the entire purpose of the alliance. Reporting from Politico revealed that the armistice was haggled out by campaign aides; Cruz and Kasich never actually spoke to each other.

But Crusich’s most daunting challenge is Trump’s momentum. There seems to be an inchoate sense among many Republican voters that the primary season is over, Donald Trump has triumphed, and it’s time to form ranks around the frontrunner. In Indiana, long assumed to be Cruz Country, recent polling records a five-to-eight-point Trump lead. In California, where Cruz has an undisputedly superior ground game, Trump is leading by 18 in a CBS News poll and 27 in a Fox News poll. Many believed the paucity of media coverage throughout most of April would deoxygenate Trump’s telegenic campaign; as usual, he seems only to have benefited.

This was the scene going into last night’s northeastern contests, the so-called Acela primary. As with New York, the question wasn’t whether Trump would win, but by how much; and as with New York, the answer was: wow. As of print time, Trump had scooped up 109 delegates, including every committed delegate in Pennsylvania, Connecticut, Delaware, and Maryland. Crusich was held to a mere eight delegates in Rhode Island—five for Kasich, three for Cruz. The alliance was wholly uncompetitive in Pennsylvania, where Trump swept not just eastern working-class strongholds, but “Pennsyltucky” rural counties that hypothetically might have gone for Cruz.

It not like Crusich didn’t try. Cruz campaigned hard in the Keystone State and Kasich brought his often-brusque style to New England. (Kasich to the Hartford Courant: “The reason why these companies are fleeing this state is because you’re driving them out. …The fact is, when you beat them to a pulp, they leave.” It’s strange to think that, in a more normal election, Kasich might be regarded as the loose cannon.) And yet Trump’s win was almost effortless. The rules of politics continue to be inverted.

Prior to Tuesday’s contests, there was some minor turmoil within the Trump camp. Apparently Trump hadn’t been consulted before his aide Paul Manafort hinted that the real estate mogul would become more presidential. For this unspeakable suggestion, Manafort was reportedly downgraded in favor of none other than Corey Lewandowski. And it showed: the victory speech last night was not only classic Trump, it seemed determined, both in length and substance, to compensate for the relative restraint of his New York address last week. “I traveled New York State, and I went to Syracuse, and Poughkeepsie, and Rome,” Trump blared. “This Rome, our Rome, Rome, New York, as opposed to there’s another Rome out there someplace.” (The Circus Maximus is a total disaster. I have buildings that are ten times bigger.) Trump did find some time to laud the rest of the northeast, and also continued his gleeful ridicule of Crusich: “What it is is politicians. All talk, no action, they can’t get anything done.”

And that’s Crusich’s other flaw. It smacks of the very political shenanigans and backroom palm rubbing that Trump voters have been rebelling against. Trump’s cry of “We need to stop this Washington insider scheme!” rings a lot clearer than Crusich’s “We need to blunt Trump through strategic voting!” At any rate, it’s not over for Cruz and Kasich. Next week’s Indiana primary—an electoral bear trap with fifty-seven winner-take-all delegates—will likely decide whether Trump clears the 1,237 finish line. And there are still wild cards to be played, including a surprise announcement from Cruz—believed to be Carly Fiorina’s selection as his running mate—later today.

But the mouthy mogul has inched far closer to outright victory than most observers thought possible. Perhaps Trump will still fall short, but at this point, who’s willing to bet against him?