The Current AUMF Debate Is Weird 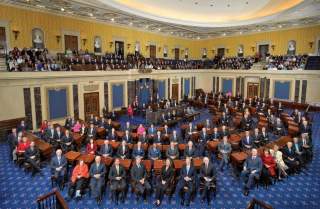 At some point soon, either in the lame-duck session or early next year, Congress is likely to vote on an Authorization for Use of Military Force (AUMF) against the Islamic State. Recently, there have been a number of proposals, both from legislators and outside experts, about what such an AUMF might look like. The main questions that are up for debate are: Will the law have any geographical or temporal restrictions? How much detail will it go into about what exactly the mission is and what means the executive branch can or cannot use to achieve it? What reporting requirements will it impose on the White House? And will the authorization only deal with the Islamic State, or will Congress revise and update the 2001 AUMF (the basis for the larger “war on terror”) at the same time?

These are all important questions. However, in this post I want to zoom out and make one very general point about just how weird this whole process is. Namely, this entire debate is about a hypothetical AUMF that the White House does not think it needs for a war that started over three months ago.

The United States began conducting limited air strikes against the Islamic State in early August. On September 10, President Obama gave a speech in which he laid out a broader strategy that Washington would pursue in order “to degrade and ultimately destroy” the group. Since then, the White House has maintained that the campaign against the Islamic State is legally supported by both the 2001 AUMF and the 2002 AUMF that authorized the Iraq War. The Obama administration has said on multiple occasions that it would “welcome” congressional support for the ongoing operations, but it has been equally adamant that it doesn’t view such a vote as necessary.

This was made explicit in a press briefing with White House press secretary Josh Earnest last week. Earnest said that Obama believes “that it is beneficial to the broader effort if we send a very clear signal to the international community, both to our allies and to our enemies, that the executive branch and the legislative branch are on the same page when it comes to the strategy.” But, when asked by a reporter if Obama would “press forward with this mission” even in the absence of congressional action, Earnest replied, “That's correct, because Congress has already given him this authority in 2001.” And so the war against the Islamic State will continue whether or not Congress votes for it.

This doesn’t mean that pursuing a new AUMF is a waste of time. The details of what the authorization will actually say matter a great deal. And it would doubtless be an improvement to place the ongoing mission in Iraq and Syria on sound legal footing, rather than basing it on a questionable interpretation of a thirteen-year-old law. But, at the same time, we should all understand just how limited the frame of this debate is. When it comes to what the Pentagon is calling Operation Inherent Resolve, the only real choice members of Congress have is between a war they’ve voted for and a war they haven’t.