The Day After: The Fallout From the Philippines Arbitration Case Against China 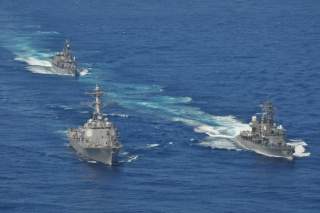 What compels compliance with rulings based on international law? There are two camps that hold distinctly divergent views on the issue. Rationalists believe that nations choose to comply or not based on fear of punishment in the form of sanctions, international enforcement, or other material costs. Constructionists, on the other hand, believe that nations choose to comply with international law because they want to follow norms and existing rules of behavior, or fear the reputational costs of non-compliance.

The impending Permanent Court of Arbitration (PCA) ruling at the Hague in a dispute between the Philippines and China over maritime features in the South China Sea will either be one of the most consequential decisions ever meted out by the PCA or one of the most inconsequential. The ruling is expected to be released July 12. How China and other countries respond in the aftermath of the decision, expected in the coming days, will also to a large extent determine which theoretical camp of international law is proven correct regarding compliance with and the value of international maritime law treaties, in this case the United Nations Law of the Sea Convention (LOSC).

This article will attempt to forecast several plausible rulings by the PCA and their impacts on the behavior of China, regional actors, and to the United States.

The Philippines seeks a declaration, first and foremost, that both countries’ respective rights and obligations with regard to the waters, seabed, and maritime features of the South China Sea are governed by the LOSC and that China’s claims based on “historic rights” – as manifested by its so-called “nine-dash line” – are inconsistent with the convention and therefore invalid.

Second, the Philippines seeks determinations as to whether certain maritime features claimed by both countries can be characterized as “islands,” “rocks,” or “low tide elevations (LTEs).” If these features are determined to be “islands” under the convention, for instance, they could generate an exclusive economic zone (EEZ) or entitlement to a continental shelf. If, however, those features are found to be “rocks” they would only be capable of generating a 12 nautical mile territorial sea. If considered an “LTE,” on the other hand, they would be incapable of generating any maritime entitlements at all. Most of the features that China currently occupy are generally known to be either “rocks” or “LTEs” – at the most giving China a 12 nautical mile maritime zone from any of the features. The court will most likely issue a ruling that island reclamation activities that add land to the feature will not change the underlying characteristic of that feature. If the court finds that none of China’s occupied features are entitled to an EEZ, such a ruling would strip China of most of its maximalist maritime zones covering almost the entire South China Sea, areas that China sometimes refers to as a “restricted military zone” that it uses as justification to prevent freedom of navigation operations of the United States Navy and others.

And third, the Philippines seeks a declaration that China has violated the convention by preventing Filipino fishermen from pursuing their livelihood in Scarborough Shoal, harming the maritime environment within Philippine territory, and performing “dangerous operations” against Philippine fishermen using law enforcement vessels.

China has refused to participate in the case and instead published a “position paper” stating its reasons for rejecting participation in the proceedings and restating its rights to historic claims to all features in the South China Sea. The PCA has made clear, however, that “absence or failure of a party to defend its case shall not constitute a bar to the proceedings,” meaning China is still a party to the arbitration and shall be bound by any award the tribunal issues.

It should be emphasized that the tribunal will not rule on the underlying sovereignty disputes in the South China Sea (who owns what) or on sea boundary delimitations (overlapping maritime rights between nations). For the former, the PCA does not have jurisdiction to rule on disputed sovereignty claims. For the latter, China explicitly exempted itself from compulsory dispute resolution of a wide range of issues, including  delimitation of maritime boundaries, when it invoked Article 298 of the LOSC. The Philippines is simply seeking a ruling on which maritime zones states can claim under the LOSC, and which rights and jurisdiction states have to explore and exploit the natural resources in and under the waters in the South China Sea.

Immediately after the ruling – assuming the court rules in favor of the Philippines on most counts as many predict – China will likely commence a forceful propaganda campaign to denounce the PCA’s ruling as invalid and announce that China will not comply with the judgment. China also is expected to seek to mobilize as many supporters as possible to support its stance against compulsory dispute settlement, as it already has begun to do. This move can be anticipated with certainty.

What concrete actions China takes in the months and years ahead are more difficult to forecast.

The most unlikely response is for China to deescalate its actions and rhetoric. Under this scenario, China would be cognizant of the international reputational costs and seek to demonstrate to the world its intent to follow international norms of behavior and rules under the LOSC.

A more likely scenario, and one that would pit China more directly in conflict with regional states and the United States, is that China could decide to take a more forceful response to solidify its claims. This could involve the announcement of an Air Defense Identification Zone (ADIZ) over the South China Sea, similar to its announcement of an East China Sea ADIZ in 2013. China might begin to reclaim existing or new, unoccupied features, including on Scarborough Shoal. China seized Scarborough Shoal in 2012, which is the closest Chinese-occupied feature to the Philippines. China might also draw baselines around its claims in the Spratly Islands as justification of its jurisdiction and rights surrounding those features.

China may accelerate the process of seeking a diplomatic solution to the disputes in the South China Sea. China would most likely first approach newly inaugurated President Rodrigo Duterte of the Philippines to entice him into bilateral negotiations over the sovereignty of maritime features in the South China Sea. China might also seek to exert more influence within the Association of Southeast Asian Nations (ASEAN) to forestall attempts by ASEAN nations to pressure China to change its tactics and behavior. China may even agree to a Code of Conduct with ASEAN to assuage fears over Chinese intentions in the region, but probably only if it is sufficiently watered down to allow freedom of action by the Chinese.

Finally, assuming the ruling significantly curtails China’s expansionist interpretation of maritime rights based on rocks and LTEs in the South China Sea, other states with maritime disputes with China, like Vietnam, might bring cases against China before the PCA. A PCA ruling delegitimizing many of the Chinese claims would offer a procedural blueprint for others to bring disputes in the South China Sea before the court.

Whether or not China will pay a political price for ignoring the ruling will to a large degree be determined by how forceful other states respond in the aftermath of court action. Public statements supporting the importance of abiding by the rule of law by regional states, the United Nations, Europe and the United States would send an important message to Beijing. If China choses to disregard the ruling as is widely expected, it will be seen by many states as a rising power with little respect for international norms and principles of law. Such disregard will be a matter of serious concern for the many states that want the oceans to be governed by the law under the LOSC, rather than by brute force. Were China to significantly accelerate its foothold in the region by dredging; building facilities, runways and ports, and deploying military assets to disputed features in response to the ruling, the onus would fall on the United States and regional actors to respond diplomatically, economically and militarily.