The Deadliest Aircraft in Russia's Arsenal You've Never Heard Of 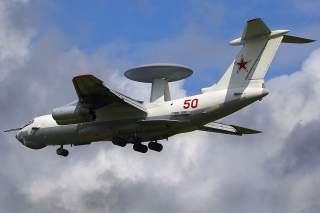 On April 29, 2017, a photograph appeared on social media apparently showing a Beriev A-50 SRDLO — that’s the Russian acronym for “airborne early warning and control system” — in flight over Syria.

Israeli satellite photographs confirmed the presence of a single A-50 on the apron of Hmemmem air base south of Lattakia on May 3, 2017.

The aircraft deployed in Syria is the latest version to enter service, the A-50U. The Russian air force, the VKS, apparently received four such aircraft between 2011 and 2017.

The A-50 is a strategic airborne early warning and control aircraft based on the Il-76 airframe. The centerpiece of the A-50U variant is the Shmel-M or Izdeliye RM mission system, including the Shmel-M radar. Working in S-band, the latter features two antennas inside a dome with a 36-foot diameter mounted atop two pylons above the rear fuselage. The dome rotates at a rate of six revolutions per minute.

The Shmel radar works in a quasi-constant search mode for tracking aerial targets out to 600 kilometers, and in a pulse mode to track surface targets out to a range of around 300 kilometers. A combination of these two modes is possible too.

In contrast to the original variant, the A-50U also boasts rest compartments including a galley and a toilet for its crew of around 15. Two pilots, a navigator, an on-board engineer and a communications specialist operate the aircraft.

The other 10 include a commander, three tracking operators, three guidance navigators and three engineers, all of whom operate the mission equipment.

The deployment of the VKS A-50U to Syria makes sense in the light of multiple developments in Syria in the spring of 2017.

The Russians have increased the number of their combat aircraft in Syria to more than 40, primarily in reaction to insurgent offensives in eastern Damascus and northern Hama. Although Moscow has announced “de-escalation zones” in most of northwestern and southwestern Syria, fierce fighting continues in northern Hama.

And there are rumors that the Russians, in cooperation with the Syrian regime and Iran, are planning a big offensive in the direction of Dayr Az Zawr, which has been under Islamic State siege since 2014.

Furthermore, the A-50U deployment could be part of the Russian response to the U.S. attack that demolished Shayrat air base in Syria on April 7, 2017. The Americans launched cruise missiles in retaliation for the regime using chemical weapons against Khan Sheykhoun on April 4.

The Americans’ 59 Tomahawk missile passed within 70 kilometers of Hmemmem air base without the Russian S-400 air-defense system at the base being able to engage them. The A-50U could improve early warning against future attacks.

Finally, the deployment of the VKS A-50U reflects Russia’s threats to close large parts of Syrian air space to U.S. and allied aircraft, a threat the Pentagon quickly dismissed.

Since then, the Russian and U.S. militaries have reached a new agreement about mutual de-confliction in the skies over Syria.

This originally appeared in WarIsBoring here.