The Election of Tsai Ing-wen: What Comes Next? 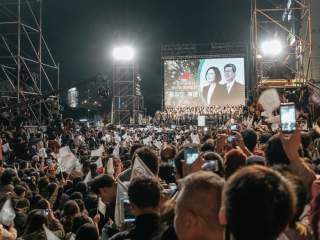 There was little ambiguity in the landslide victory of Tsai Ing-wen and Taiwan’s Democratic Progressive Party (DPP): Tsai won 56.1 percent of the vote, nearly twice that of Kuomintang (KMT) candidate Eric Chu, and the DPP won sixty-eight of the 113 seats in parliament. The election victory of the DPP, whose charter includes the goal of independence from China, is a political earthquake with large and still uncertain consequences for Taiwan’s economy, society and politics, for cross-strait relations, and, not least, for the U.S.-China-Taiwan triangle.

In an Asia where female leaders are not that unusual, Tsai is a rare case of an independent leader who is not part of a family dynasty. Tsai’s victory gives Taiwan its first female leader, it also marks another first: the DPP’s majority in the Legislative Yuan is the first time since 1949 that the legislature has not been dominated by the KMT.

Tsai’s sweeping victory reflects a sense of malaise after eight years of KMT rule under Ma Ying-jeou, one in which Taiwan’s economy grew dependent on mainland China. Taiwan—in the 1980s considered one of the “Four Tiger” industrializing economies along with Singapore, Hong Kong and South Korea—has seen its growth sag to 1 percent in 2015. Youth unemployment is at 13 percent and housing prices and accessibility are major concerns, as are technological competitiveness and viability of small businesses.

Under the Ma administration, cross-strait ties, all but non-existent before 2008, blossomed. Travel, tourism, communications and not least of all, trade and investment mushroomed. Roughly 25 percent of Taiwan’s trade is now with China, its largest trading partner. Officially, Taiwanese businesses have invested at least $60 billion in China. Unofficially, the number is as high as $200 billion. Much of Taiwan’s vibrant electronics industry has shifted production to the mainland. As many as a million Taiwanese live in China, most in the Shanghai area.

But average Taiwanese, particularly the youth, did not feel the benefits of this cross-strait economic activity. Ma’s controversial trade deals with China sparked the Sunflower protest movement in 2014.

An intriguing question raised by Tsai’s victory is whether it is simply a case of “throw the bums out,” or if it reflects a generational shift, with younger native Taiwanese becoming more prominent and those from the mainland, the core of the KMT, getting eclipsed. Does it blend economic grievances with a growing sense of “Taiwan identity” and greater distance from mainland China? According to a recent poll by Taiwan’s National Chengchi University, a record 59 percent said they identified as Taiwanese, while only 34 percent said they were both Taiwanese and Chinese. This suggests that fewer and fewer now consider themselves Chinese first and foremost.

Beijing will be watching this trend closely. Concern about Taiwan’s fate has risen to a fever pitch as it became more evident that the DPP would win. Beijing’s concerns about a probable DPP victory paved the way for Chinese President Xi Jinping’s unprecedented meeting with Ma in Singapore last November.

Beijing’s heavy-handed warnings had backfired in past elections. This time, Beijing sought to emphasize the positive: continue the “One China, two Interpretations” (known as the 1992 consensus) and cross-strait relations can still thrive.

Xinhua, the official Chinese news agency, warned that the DPP victory “poses grave challenges to cross-Strait relations” and underscored Beijing’s opposition to “secessionist attempts.” Concern was also obvious in the U.S. response to the DPP victory: "We share with the Taiwan people a profound interest in the continuation of cross-Strait peace and stability," State Department spokesman John Kirby said in a statement.

The delicate political ballet has begun. For her part, Tsai in her victory speech vowed to “work towards maintaining the status quo for peace and stability across the Taiwan Strait.” She emphasized: “Both sides of the Strait have a responsibility to find mutually acceptable means of interaction.”

“We must ensure that no provocations or accidents take place,” she added.

As if in response to Tsai, China’s Taiwan Affairs Office, while warning against any moves toward independence, said, “We are willing to strengthen contact and exchange with any parties and groups that recognize that the two sides belong to one China.”

Beijing, Taiwan and Washington have no interest in escalating tensions in cross-strait relations. All three have their plates full. For Tsai, her success or failure will be measured by how far she will go to reform and rejuvenate the economy, and address social concerns such as unemployment, housing, and health care.

A key question will be how much political flexibility is present on both sides of the Strait. Tsai seeks more international space for Taiwan and wants to diversify its economy. Beijing could seek accommodation by, for example, finding a term that would allow Taiwan to join the Trans-Pacific Partnership (TPP) trade agreement and China’s Asian Infrastructure Investment Bank (AIIB). Taiwan is a member economy of the Asia-Pacific Economic Cooperation (APEC) under the name “Chinese Taipei.” In other fora it has used “Taipei, China.” Whatever the formula to fudge the issue of sovereignty, Taiwan will remain de facto independent, but meeting halfway could help create a new normal for cross-strait stability.

Robert A. Manning is a Senior Fellow in the Atlantic Council’s Brent Scowcroft Center on International Security. This article first appeared in the New Atlanticist.