Is This the End for Jacob Zuma? 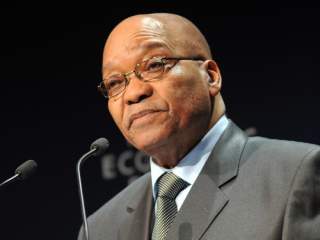 Jacob Zuma’s political power is based on his support by the African National Congress’s political apparatus—often called Luthuli House, after the party’s headquarters building in Johannesburg. With support of the party machinery, he has weathered numerous political and personal setbacks ranging from a rape trial to accusations of corruption. However, if the party turns against him, he will not long survive as party leader or chief of state. In 2008, Thabo Mbeki was removed from both positions by a party revolt. The same is possible for Zuma.

In one four-day period in December, Zuma fired two finance ministers and hired a third. International and domestic markets signaled their disapproval: the rand, the South African currency, plunged, as did the Johannesburg Stock Exchange. The international credit agencies raised the possibility of rating South African bonds as “junk,” as they have (or are about to do) with Russia’s and Brazil’s. Zuma reversed course and appointed the well-respected Pravin Gordhan as finance minister. The rand and the stock markets thereupon recovered some—not all—of their losses.

End of episode? Perhaps not. The question is whether Zuma has been seriously wounded politically in the eyes of the ANC. There are signs that he may have been. Former finance minister Trevor Manuel in an open letter to Lindiwe Zulu, small business development minister and confidant of Zuma, said that the president’s actions “shook the trust of the Cabinet collective at its roots.” He went on to say that “the trust is not broken only with the Cabinet of course’ it is also broken with the ANC, with the broader South African electorate, with the markets and the entity you (Lindiwe Zulu) call business.” “The breach of trust was not the first but perhaps the last, straw that broke the camel’s back in the careless handling of a pivotal portfolio.” Zulu has declined to respond to Manuel.

Manuel does not appear to be alone. Former cabinet minister Tokyo Sexwale in a BBC television appearance was asked whether Zuma’s grip on power is slipping. Sexwale did not respond directly but said that Zuma had learned a hard lesson: “it’s important that politicians should understand before they take decisions the consequences of the decisions because particularly in the markets, you take a decision of course it knocks off the country, you fall off your stool, the debt rises, inflation, and so on.”

Public anger at Zuma is also widespread, one journalist quoted Nelson Mandela: “If the ANC does to you what the apartheid government did to you, then you must do to the ANC what you did to the apartheid government.” Nevertheless, it appears unlikely that the party will move quickly against Zuma. Manuel, who is widely respected in South Africa as well as by the international financial community, is retired. Sexwale lost a party leadership contest with Zuma, who subsequently fired him from the cabinet. Up to now, Zuma has been able to ignore his critics in the party as well as the quality South African media, which dislikes him. However, if the party faces severe reversals in the local elections of 2016, Zuma might find himself very vulnerable.

John Campbell is the Ralph Bunche senior fellow for Africa Policy Studies at the Council on Foreign Relations. This article first appeared in Africa in Transition.