Is the Era of the Aircraft Carrier Over? 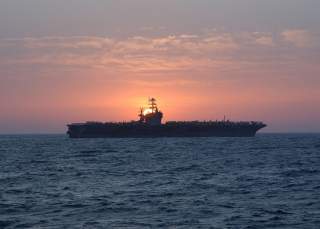 The nuclear-powered aircraft carrier has been the ultimate symbol of American power and prestige for decades. These vessels are both incredibly capable and incredibly expensive. However, the combination of the proliferation of long range anti-access/area denial (A2AD) weapons systems and the decreased range of the US Navy Carrier Air Wings (CAW) has called into question the future utility of the US Navy’s carrier fleet, at least in a major war.

Power projection requires access to and control of the area of operations to be effective. A2AD strategies are designed to prevent or hinder access, and ensure that an adversary can’t assert control over the area of operations even if they gain access. The continuing development of accurate long range anti-ship ballistic missiles (ASBMs), anti-ship cruise missiles, and advanced surface-to-air missile systems is increasingly allowing major military powers to create A2AD ‘bubbles’ or ‘bastions’ that place surface ships and aircraft at significant risk should they enter the area. China’s two ‘carrier killer’ ASBMs, the DF-21D and DF-26, are good examples of this. The DF-21D has an estimated range of 900 nautical miles (1,700km) while the DF-26’s range is estimated to be between 1,800-2,500 nautical miles (3,000-4,000km).

It’s not just adversarial developments that have raised doubts about the future of the American aircraft carrier. The range and diversity of CAWS has steadily declined since end of the Cold War and USN’s deep strike capability along with it. The current CAW on the Nimitz-class contains 62 aircraft—centred on the F/A-18 Hornet and F/A-18E/F Super Hornet—with an average range of just 496 nautical miles (918km). The F-35C, the future centrepiece of CAWs, is only marginally better in the range department (630 nautical miles or 1,166km) but has a smaller payload.

An obvious answer for keeping carriers relevant in light of these developments is increasing the range of the CAW. Aircraft with the range necessary to do deep strike missions launched from beyond the range of the enemy’s A2AD capabilities is vital to the continued survival of the carrier. Outfitting the F-35C with external or conformal fuel tanks is one option, albeit an imperfect one—adding these tanks can alter the aircraft’s radar cross section and potentially make it more detectable. Adding long range unmanned aerial vehicles (UAVs) to the CAW is another option. The MQ-25A Stingray is just the tip of the iceberg in this regard, offering a long range aerial refuelling system that can refuel the F-35C in contested territory, expanding the F-35C’s deep strike potential. Developing a long range strike UAV is a logical next step in giving the aircraft carrier the reach and punch it needs to survive in this new threat environment.

But perhaps it’s time for the US Navy to rethink what aircraft carriers are used for. Given developments in missile technology, one potential role for an aircraft carrier is to launch long range stealthy ISR UAVs that provide real-time targeting data for cruise missile strikes from submarines, ships, or land-based aircraft. A2AD ‘bubbles’ require a vast network of maritime reconnaissance platforms—including satellites—to build the necessary ‘kill chains’ to be effective. By facilitating attacks on reconnaissance networks, a carrier strike group could help degrade an A2AD ‘bubble’ to a level where the risk of entering and conducting attacks using its own strike aircraft is deemed acceptable.

There’s also the opportunity cost; given the immense cost of one Ford-class aircraft carrier, some have argued that the money is better spent elsewhere in the fleet. Bryan McGrath has done some excellent work evaluating these proposals (pgs. 85-90) and his conclusions cast some doubt on their feasibility. He concludes that transitioning to a larger fleet of smaller nuclear-powered carriers would sacrifice significant capability but offer little in the way of savings.

A large fleet of smaller conventionally powered carriers would save a lot of money, but in exchange for a dramatic drop in capability. A no-carrier fleet would require sacrifices to one of the Navy’s three operational states: presence, deterrence, or warfighting. Those choices would have considerable impacts on the US’ ability to project power and its alliances. At some point decisions will have to made about whether the resources invested to allow carriers to operate at the long ranges dictated by enemy A2AD ‘bubbles’ is translated into tangible operational benefits.

The challenges threatening the future of the US Navy’s aircraft carriers may be insurmountable and they may cause the carrier to go the way of the battleship. Innovative thinking about traditional doctrinal roles is required if the carrier is to remain a viable warfighting tool. Given the new and rapidly advancing threats facing these carriers, the sooner the US Navy comes to grips with these challenges and adapts to them—or moves on from carriers entirely—the better.