The F-14 Tomcat: The American Fighter Jet Iran Would Send to War (Against America) 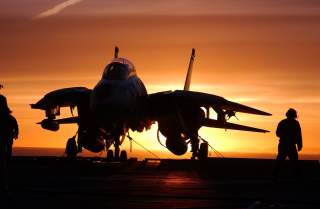 If the United States goes to war with Iran following President Donald Trump’s decision not to certify Tehran’s compliance with a multi-national nuclear deal, the Pentagon will mostly be facing off against its own hardware.

Perhaps the most prominent of these is the Grumman F-14A Tomcat, which was made famous by the movie Top Gun. Before the revolution, the Iranian Shah, Mohammad Reza Pahlavi, bought 80 of the variable sweep wing fighter aircraft along with 633 Hughes AIM-54 Phoenix long-range air-to-air missiles for his Imperial Iranian Air Force. Ultimately, 79 Tomcats were delivered to Iran before the collapse of the imperial government.

On paper, the F-14 was an excellent aircraft. It was fast, long-ranged with decent maneuverability and what many—at the time—considered to be the best air-to-air radar and missile combination ever built in the form of the 195 statute mile range Hughes AWG-9 and the 110 nautical mile range AIM-54. For the U.S. Navy, it was exactly what it needed to defend its carrier battle groups from massive waves of Soviet long-range bombers and cruise missiles if the Cold War ever turned hot.

While Top Gun was excellent public relations for the U.S. Navy, the Tomcat was not an excellent aircraft in operational service. At the best of times, the F-14 was a maintenance hog and only got worse as the Navy and Grumman shoehorned more and more systems into the airframe. The ultimate F-14D model—while a capable fighter when all systems were a go—was particularly notorious for their lack of reliability and the sheer difficulty of performing maintenance on them. Maintenance issues and the expense of keeping the F-14 in service was one of the reasons the U.S. Navy did away with the troublesome Tomcat in 2006 in favor of the Boeing F/A-18E/F Super Hornet.

Performance wise, the Tomcat is fast—with a maximum speed of Mach 2.4 in full afterburner. However, the aircraft was initially fielded with the Pratt & Whitney TF30-P-412 that produced only 20,900lbs of thrust in afterburner—which meant that the Tomcat was severely underpowered. “The F-14A was underpowered for a front-line fighter, and guys like me began referring to it as the twin-tailed turkey,” as former F-14 test pilot Mike Williams wrote.

Moreover, the TF30 was prone to compressor stalls and other anomalies in flight, which meant the flight crew spent much of their time managing the engines instead of focusing on the mission. Over time, the Navy worked many of the issues with the TF30, but the problems were never completely solved. It was wasn’t until the Navy reengined a portion of the fleet with General Electric F110 engines that the Tomcat lived up to its potential—but even the new engines were not trouble free.

“Initially we had a lot of compressor stall problems with the TF-30 engines that the F-111 pilots didn’t encounter,” Williams wrote. “It took a while, but over the years we managed to engineer enough upgrades to work these problems out.”

While the reengined F-14B and the F-14D were excellent dogfighters—though limited by a paltry 6.5G-7.0G-load limit, the F-14A was hampered by its underpowered engines in a within visual range fight. Experienced aircrew could still make the F-14A perform well with exceptional energy management skills and making good use of the jet’s variable geometry wings, but the Tomcat was at a distinct disadvantage against newer aircraft such as the F-15C, F-16 or something like the MiG-29 or Su-27. Indeed, Seymour Johnson-based F-15E instructors would often use training exercises against Oceana-based F-14s to boost the confidence of young Strike Eagle wingmen who needed an easy win.

The problem ultimately was the F-14’s antiquated 1960s-era avionics design. As a former Tomcat radar intercept officer describes, the F-14 was not user friendly.

“One of the challenges was always trying to cycle circuit breakers when things were broken in the jet,” Lt. Cmdr. Joe Ruzicka told Foxtrot Alpha.

“The Tomcat had eight panels of circuit breakers in the back behind the RIO that looked like eight 1970's Lite Bright games all stuck together. The hardest part was making sure you pulled the correct one, as a misstep in that department could be fatal. Pulling circuit breakers was done mostly by feel. Being strapped into an ejection seat, you certainly couldn't turn around easily and verify visually what circuit breaker you were pulling. The good news is there was a method to finding the right circuit breaker based off of its location, assuming you had practiced. The bad news was sometimes you needed to have the flexibility of a 7 year-old girl with a broken arm to reach it!”

Which leads us to our final point—the AWG-9 was a first generation planar-array pulse Doppler radar—it has excellent range, but its resolution is poor compared to modern hardware. It was also extremely workload intensive and unreliable—nor was the AIM-54 any better.

“The bad thing about the Phoenix was it's old technology, which made it cumbersome and sometimes not function properly,” Ruzicka. “It required its own cooling pump and sometimes the rocket motor wouldn't fire, making the missile fall dead off the rails. This earned it the not so glamorous nickname ‘Phoenie-Bomb.’”

As many naval aviators will attest—even those with experience flying the F-14—the Navy gave up nothing when it retired the Phoenix in 2004, two years ahead of the Tomcat. The Super Hornet’s original combination of the APG-73 and the AIM-120 AMRAAM offered superior performance in practical terms—and the F/A-18 could independently interrogate targets to identify friend from foe. Moreover, with the advent of the APG-79 active electronically scanned array radar and newer AMRAAM variants such as the AIM-120D, the Super Hornet is a better overall fighter.

There are still about a dozen or so indigenously upgraded Iranian F-14s armed with locally-built reverse engineered versions of the AIM-54 called the Fakour-90. If it does come to war, the Iranian F-14s will likely fall easy prey to the Navy’s new F/A-18E/Fs. Moreover, against the U.S. Air Force’s Lockheed Martin F-22 Raptor, which would almost certainly spearhead an attack, the Tomcat would be shot out of the sky before the Iranians had any idea they were under attack. The Tomcat is the day before yesterday’s technology.