The F-23 Stealth Fighter: A Super Weapon America Should Have Built (And Not the F-22 Raptor)? 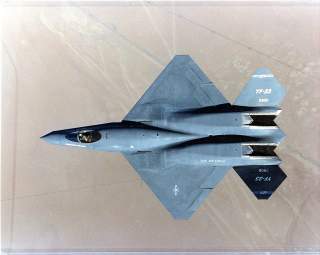 Ultimately, Lockheed Martin did deliver a world beating air superiority fighter that offers performance that is unmatched by anything else fly. However, one can still wonder, what would an operational F-23 have looked like?

The Lockheed Martin F-22 Raptor is the best air superiority fighter ever built, but could America have done better?

When the YF-22 prototype won the contract for the Advanced Tactical Fighter (ATF) in April 1991, it was a lesser plane compared to the Northrop YF-23 in many ways. Though the YF-22 was a more maneuverable aircraft, the YF-23 had far greater supersonic cruise capability—especially when outfitted with the General Electric YF120 variable cycle engines. Even when powered by the less powerful Pratt & Whitney YF-119, the YF-23 had the ability to fly an entire sortie at supersonic speeds above Mach 1.4 (explained to me sometime ago by Barry Watts at the Wilson Center—who was an analyst on the Northrop team at the time). The sleek prototype jet could also cruise at slightly more than Mach 1.8 when equipped with the YF-120.

“I don’t recall Barry Watts, although the name has a familiar ring. He was right about supercruising for the whole sortie, as that’s the definition (Ps=0), but he was wrong about the number,” Jim Sandberg, test pilot of the YF-120 powered YF-23 told me a few years ago. “The one you quoted was just a bit shy for our PAV-1 that was equipped with the relatively underpowered YF-119 engines developed by P&W.  ‘My’ airplane, PAV-2, equipped with the more powerful YF-120 engines developed by GE supercruised quite a bit faster—‘very fast’, as the USAF censors advised us to say.”

The final production version of the F-22 Raptor also cruises at speeds greater than Mach 1.8 without afterburner—but its endurance is much more limited. In fact operational Raptor pilots tell me that it’s not very useful during real world missions. “Supercruise is impressive on paper but not very practical in a fighter with limited fuel,” a senior Air Force F-22 pilot said. “I would much rather have an aircraft that accelerates and gains energy back quickly than one that supercruises.”

The YF-23—contrary to popular belief—did not have an overall top speed that was any faster than the YF-22. Both jets were limited to an aerodynamic max speed of about Mach 2.2 as a result of their fixed-ramp external compression inlets. In fact, operational F-22 Raptors are “red lined” at exactly Mach 2.0 with an artificial placard because the aircraft’s stealth coating are prone to delamination if the jet went any faster—particularly around the canopy. The Northrop design also had better range compared to the YF-22, and was arguably a stealthier design.

But why did the YF-23 get beat by the Raptor?

On the surface, the decision to go ahead with the YF-22 might seem like a vote in favor of a more conservative design since both jets grossly more than exceeded the Air Force’s requirements. But there was much more to the Air Force’s decision than aircraft performance. Three major factors played in Lockheed’s favor.

This being Washington, politics matter. Northrop and partner McDonnell Douglas had antagonized the Air Force and Pentagon leadership with their performance on the B-2 bomber and A-12 naval strike aircraft, Watts explained.

The second factor was the U.S. Navy. Even though the service had dropped out of the ATF program, the U.S. Navy still had a vote on which aircraft would be selected. The Navy’s choice was the naval variant of the YF-22 design, which looked like bizarre hybrid of a Raptor and F-14 Tomcat with variable geometry wings. “The team, working hard on every detail of our NATF [Naval Advanced Tactical Fighter] design in late 1989 and early 1990, produced a very stealthy swing-wing fighter that could supercruise. It was very suitable for carrier operations,” according to Sherm Mullin, the Lockheed Skunk Works lead for the ATF program. “The Navy still got a vote in the ATF competition, and, as we found out later for certain, it cast it for our F-22 team.”

The third major factor was that while Northrop adhered strictly to the requirements, Lockheed had the foresight to engage Tactical Air Command (and its successor Air Combat Command (ACC)) on what the Air Force actually wanted. While theoretically the YF-23’s combination of sheer speed, altitude and stealth should have carried the day; ACC operators had not fully bought into the fact that stealth would actually work.

Instead, ACC operators wanted to be sure that the ATF was maneuverable enough to defeat any comer in a visual range dogfight—and moreover—those pilots wanted a jet that would have grossly superior agility at all speeds, altitudes and angles of attack. Lockheed more than delivered on the Air Force’s desire for an extremely agile fighter with the thrust-vectoring Raptor.  Watts described the YF-22 as a “super F-15”—which was exactly what the operational Air Force wanted.

Once the YF-22 was officially selected for the ATF program, it was designated the F-22 Raptor. Pratt & Whitney won the engine contest with its F119—which while not as powerful, was far more reliable than General Electric’s novel variable-cycle YF120. Ultimately, Lockheed Martin did deliver a world beating air superiority fighter that offers performance that is unmatched by anything else fly. However, one can still wonder, what would an operational F-23 have looked like?

This appeared back in November 2015 and is being reposted due to reader interest.