The F-35: How Taiwan Could Really Push Back Against China 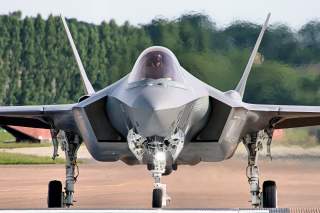 For the first time, an American National Security Strategy (NSS) explicitly mentions Taiwan. The NSS includes a commitment to “maintain our strong ties with Taiwan in accordance with our ‘One China’ policy, including our commitments under the Taiwan Relations Act to provide for Taiwan’s legitimate defense needs and deter coercion.”

The NSS language on Taiwan parallels Congress’s increased interest in strengthening ties with Taipei. Last summer, Senators Tom Cotton and Corey Gardner introduced the Taiwan Security Act. Although that bill did not become law, its ideas on bilateral exchanges, training, and port visits were eventually incorporated into the National Defense Authorization Act, which President Trump signed late in 2017.

These developments stem from an appreciation that the island’s de facto independence is a key element in American and allied security in East Asia. Taiwan’s location makes it either a roadblock or potential Chinese pathway to the wider Pacific and is of especial relevance to the defense of Japan and the Philippines, American allies that are located directly north and south of the island.

In addition, Taiwan plays an underutilized role in the ideational competition between the United States and China. Taiwan is a constant reminder that an ethnically Chinese population can be liberal, democratic and successful.

The island has become even more of an irritant to Beijing since Tsai Ing-wen was elected president of Taiwan in 2016 and has refused to concede that Taiwan is part of “One China.” Since then, China has been upping the pressure on the island, adopting policies designed to strain Taiwan’s economy, isolate it even further internationally, and unsettle its security.

Earlier this month, China unilaterally inaugurated four new commercial air routes over the Taiwan Strait, which Taiwan security planners fear China’s military might use for non-commercial purposes. In the weeks since, China’s sole aircraft carrier has twice sailed through the Taiwan Strait, skirting the median line as it did so. These developments followed on the heels of a report by Taiwan’s defense ministry in December that Chinese military aircraft had circumnavigated the island fifteen times over the previous year. Beijing’s view is that it can do as it pleases in the Taiwan Strait and around Taiwan since it doesn’t recognize Taiwan as a sovereign entity.

Taiwan’s armed forces of course track all of these Chinese activities and its aircraft scramble to meet their mainland counterparts in the air. But the heightened pace of PLA activities is placing increasing stress on Taiwan’s air force at a time when many of its planes are too old to fly safely and, in the absence of new planes and hard-to-come by parts, available fighters are wearing out more rapidly.

Given Taiwan’s importance to US defense requirements in East Asia, its problems are America’s problems. And there is no bigger issue than China’s increasing advantage in the all-important air domain. What to do?

To begin, the Trump administration should reverse the Obama team’s decision not to sell new F-16C/Ds to Taiwan and, instead, to upgrade Taiwan’s fleet of F-16A/Bs—a process that requires taking much needed fighters out of service for extended periods. While the upgrades are useful and necessary, providing new F-16C/Ds—fighters that Lockheed Martin could produce in relatively short order—would be of more immediate utility. Taiwan needs not only advanced jets but an increase in numbers as well.

But to truly address the current imbalance in the air over the Strait and skies of Taiwan requires a quantum leap in Washington’s thinking about what to make available to Taiwan. And there is no asset in that regard as potentially advantageous as the F-35B. Its stealth makes it far more survivable when facing large numbers of enemy aircraft and modern air defenses. And its advanced electronic warfare system has the capacity to locate and jam enemy radars and sensor systems, giving other aircraft, such as Taiwan’s F-16s, a better chance of fighting and surviving. In addition, the F-35B with its short takeoff and vertical landing capability reduces the need for large basing requirements—a capability essential when facing an enemy with an arsenal of accurate cruise and ballistic missiles. Dispersing aircraft will be an increasingly important stratagem for ensuring they survive—a stratagem more difficult to carry out with conventional fighters.

It would take some time for Taiwan to acquire F-35Bs even if they were put on the acquisition list tomorrow—even more of a reason to make that decision sooner than later. But, in the meantime, the U.S. Marine Corps should begin carrying out air exercises in the Taiwan vicinity with F-35Bs to include flights over, and landings on, the island. Not only would such exercises validate the aircraft’s utility in Taiwan’s defense but they would send a needed signal to both Beijing and allied capitals of Washington’s commitment to the island’s security. More concretely, sending F-35s to Taiwan would put a real dent in the Chinese air force’s confidence that it could dominate the air space over the Strait and over the island itself.

Michael Mazza is a research fellow in foreign and defense policy at the American Enterprise Institute, while Gary Schmitt is co-director of AEI’s Marilyn Ware Center for Security Studies.