Is the F-35 Stealth Fighter Set to Triumph Over Its Greatest Foe (Not China)? 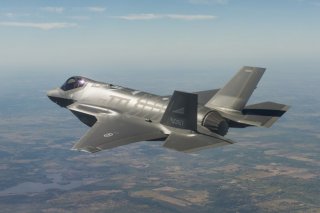 For the past few years, Andrew Davies has examined the annual USAF budget projections for the F-35A Joint Strike Fighter (most recently here). The F-35A will be the most numerous of the three variants of the joint strike fighter, and it’s the model Australia has committed to acquiring. The projected cost and production numbers of the A model have continued to stabilize since the 2012 program re-baselining, and we decided to see if the other two variants exhibited similar trends. The answer is yes, but the journey has been an interesting one.

The F-35B is the USMC variant, equipped with a vertical lift engine to allow deployment from amphibious ships. Italy and the UK are currently the only two foreign buyers of the F-35B, and USMC declared initial operating capability (IOC) last year. The F-35C has larger, foldable wings and is equipped for the stress of arrested landings on carriers. The USN is its only customer and is aiming for IOC in 2018.

The data on both those more specialized variants indicates a more turbulent history than that of the A model—shedding some light on the pitfalls of joint-service platform development—but has stabilized in recent years.

The three variants were originally intended to have 70-80% hardware commonality, and the USN budgets even costed the F-35B and C as a single line item until FY2010. Engineering and design changes through the life of the program have instead resulted in three essentially distinct aircraft, with only about 20-25% commonality.

Likely as a result of the increasing difference, the F-35B was given its own separate budget line [pdf] in FY2011. In 2012, the program was re-baselined and production significantly deferred. The impact of these changes can be seen in the fluctuating cost estimates across this time period, possibly also reflecting attempts to spread program costs across multiple years. (See Figure 1)

The biggest success story from this data analysis is that the F-35B moved from such uncertain circumstances in the FY2013 budget to IOC in July 2015 (a little more than three years later). And the 2017 budget sees production accelerate for the first time since the program began, with eight aircraft being brought forward, bringing the cumulative total to 168 aircraft by FY2021.  (See Figure 2)

The cost projections for the F-35C are less volatile than the B model, which is encouraging given the still-low production numbers (See Figure 3). Production of the C model started in 2010, two years after the F-35B, and has remained slow, at four-to-seven units per year. Production delays in FY2013 and FY2015 (see Figure 4) also indicated possible reductions in the total number of aircraft to be acquired over the life of the program. But the total of 340 units seems to have survived, albeit now spread over a longer acquisition time frame.

Delays in the delivery of the F-35C have been accompanied by purchases of an increased number of F/A-18E/F Super Hornets and EA-18G Growlers (an electronic warfare variant of the Super Hornet). Over the FY2008 to FY2017 USN budgets, projected total Super Hornet acquisitions increased from 494 to 584, and Growlers from 80 to 160. This is probably not solely due to delays in the F-35C, but reflects a need to replace ageing ‘classic’ Hornets and the EA-6B Prowler, which the Growler replaces. And we shouldn’t ignore Congress’ penchant for adding Super Hornets to the budget, regardless of whether the USN even wanted them.

Like the B variant, the FY2017 budget sees accelerated production of the F-35C. There’s still some volatility in the flyaway unit cost through FY2019, but overall the C variant cost also appears to be stabilising. This would suggest that confidence in hardware development has firmed, allowing the programming of higher rates of production.

The data shows that production costs are stabilising across all three variants, and are projected to be consistent with industry standard learning curves as the production rates increase. This is good news for the program, and is consistent with recent commentary.

However the program’s not entirely out of the woods. There are lingering problems with the on-board software—as well as the computerised logistics system—though the USAF is still planning to declare IOC before the end of 2016. There’s also a plan for a nearly US$3 billion program to further upgrade the F-35’s capabilities in the near future, known as Block 4.

Overall, the more recent figures reflect increasing stability in the F-35 program as a whole. But the earlier data is a journey through the ‘joys’ of joint development programs. The evident uncertainty should provide ample context for USAF F-35 program chief Lt. Gen Bogdan’s recent advice to ‘think really hard’ before deciding on any future joint-service platforms.