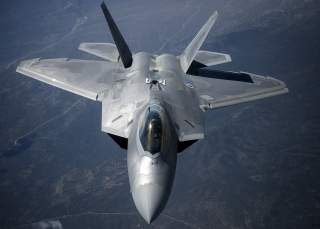 The F-35 still has a long way to go before it will be ready for combat. That was the parting message of Dr. Michael Gilmore, the now-retired Director of Operational Test and Evaluation, in his last annual report.

The Joint Strike Fighter Program has already consumed more than $100 billion and nearly 25 years. Just to finish the basic development phase will require at least an extra $1 billion and two more years. Even with this massive investment of time and money, Dr. Gilmore told Congress, the Pentagon, and the public, “the operational suitability of all variants continues to be less than desired by the Services."

Dr. Gilmore detailed a range of remaining and sometimes worsening problems with the program, including hundreds of critical performance deficiencies and maintenance problems. He also raised serious questions about whether the Air Force’s F-35A can succeed in either air-to-air or air-to-ground missions, whether the Marine Corps’ F-35B can conduct even rudimentary close air support, and whether the Navy’s F-35C is suitable to operate from aircraft carriers.

He found, in fact, that “if used in combat, the F-35 aircraft will need support to locate and avoid modern threat ground radars, acquire targets, and engage formations of enemy fighter aircraft due to unresolved performance deficiencies and limited weapons carriage availability.”

In a public statement, the F-35 Joint Program Office attempted to dismiss the Gilmore report by asserting, “All of the issues are well-known to the JPO, the U.S. services, our international partners, and our industry.”

JPO’s acknowledgement of the numerous issues are fine as far as it goes, but there’s no indication that the Office has any plan—including cost and schedule re-estimates—to fix those currently known problems without cutting corners. Nor, apparently, do they have a plan to cope with and fund the fixes for the myriad unknown problems that will be uncovered during the upcoming, much more rigorous, developmental and operational tests of the next four years. Such a plan is essential, and should be driven by the pace at which problems are actually solved rather than by unrealistic pre-existing schedules.

What will it take to fix the numerous problems identified by Dr. Gilmore, and how do we best move forward with the most expensive weapon program in history, a program that has been unable to live up to its own very modest promises?

The F-35 is being sold to the American people based in no small part on its mission systems, the vast array of sophisticated electronics on board the jet. A quick perusal of any of the hagiographic articles about the F-35 will find that they nearly always point to its capabilities to gather massive amounts of information. This information is supposed to come through its onboard sensors and the data links to outside networked sources, and then be merged by the F-35’s computer systems to identify and display for the pilot the specific threat, target, and accompanying force picture (i.e. “situational awareness”). This process is designed to allow the pilot to dominate the battlespace. Based on the actual test performance of these systems during developmental testing, however, it appears the electronics actually interfere with the pilot’s ability to survive and prevail.

Overall, problems with the F-35’s sensors, computers, and software, including creating false targets and reporting inaccurate locations, have been severe enough that test teams at Edwards Air Force Base have rated them “red,” meaning they are unable to perform the combat tasks expected of them.

One system, the Electro-Optical Targeting System (EOTS), was singled out by pilots as inferior in resolution and range to the systems currently being used on legacy aircraft. EOTS is one of the systems designed to help the F-35 detect and destroy enemy fighters from far enough away to make dogfighting a thing of the past. Mounted close to the nose of the aircraft, it incorporates a television camera, an infrared search and track system, and a laser rangefinder and designator. These sensors swivel under computer control to track targets over a wide field of regard and display imagery on the pilot’s helmet visor display.

But the limitations of EOTS, including image degradation with humidity, force pilots to fly in closer to a target than they had to when using earlier systems just to get a clear enough picture to launch a missile or take a shot. The report says the problem is bad enough that F-35 pilots may need to fly in so close to acquire the target that they would have to maneuver away to gain the distance needed for a guided weapon shot. Thus, the system’s limitations can force an attacking F-35 to compromise surprise, allowing the enemy to maneuver to a first-shot opportunity. Surrendering the element of surprise and enabling an opponent to shoot first is what we want to force the enemy to do, not ourselves.

Another often-touted feature that is supposed to give the F-35 superior situational awareness is the Distributed Aperture System (DAS). The DAS is one of the primary sensors feeding the displays to the infamous $600,000 helmet system, and it is also failing to live up to the hype. The DAS sensors are six video cameras or “eyes” distributed around the fuselage of the F-35 that project onto the helmet visor the outside view in any direction the pilot wants to look, including downwards or to the rear. At the same time, the helmet visor displays the flight instruments and the target and threat symbols derived from the sensors and mission system. But because of problems with excessive false targets, unstable “jittered” images, and information overload, pilots are turning off some of the sensor and computer inputs and relying instead on simplified displays or the more traditional instrument panel.

Here again, the system is little better than those it’s supposed to replace.

Test pilots also had difficulty with the helmet during some of the important Weapon Delivery Accuracy tests. Several of the pilots described the displays in the helmet as “operationally unusable and potentially unsafe” because of “symbol clutter” obscuring ground targets. While attempting to test fire short-range AIM-9X air-to-air missiles against targets, pilots reported that their view of the target was blocked by the symbols displayed on their helmet visors. Pilots also reported that the symbols were unstable while they were attempting to track targets.

Then there is the matter of pilots actually seeing double due to “false tracks.” There is a problem with taking all of the information generated by the various onboard instruments and merging it into a coherent picture for the pilot, a process called sensor fusion. Pilots are reporting that the different instruments, like the plane’s radar and the EOTS, are detecting the same target but the computer compiling the information is displaying the single target as two. Pilots have tried to work around this problem by shutting off some of the sensors to make the superfluous targets disappear. This, DOT&E says, is “unacceptable for combat and violates the basic principle of fusing contributions from multiple sensors into an accurate track and clear display to gain situational awareness and to identify and engage enemy targets.”

And as bad as the problem is in a single plane, it’s much worse when several planes are attempting to share data across the network. The F-35 has a Multifunction Advanced Data Link (MADL) that is designed to enable the plane to share information with other F-35s in order to give all the pilots a common picture of the battlespace. It does this by taking all of the data generated by each plane and combining it into a single, shared view of the world. But this system, too, is creating erroneous or split images of targets. Compounding the problem, the system is also sometimes dropping images of targets altogether, causing confusion inside the cockpits about what’s there or not there.

All of this means that the systems meant to give the pilots a better understanding of the world around them can do exactly the opposite. According to the report, these systems “continue to degrade battlespace awareness and increase pilot workload. Workarounds to these deficiencies are time-consuming for the pilot and detract from efficient and effective mission execution.”

F-35 boosters say it's the network that matters; what actually matters is that the network isn't working.

Ineffective as a Fighter

The F-35 was intended to be a multi-role aircraft from its inception. This latest report provides a clear picture of how it stacks up so far in its various roles, including in comparison to each aircraft it’s supposed to replace. The news is not encouraging.

The F-35’s shortcomings as an air-to-air fighter have already been well documented. It famously lost in mock aerial combat within visual range (WVR), where its radar stealth is of no advantage, to an F-16 in early 2015, one of the planes the F-35 is supposed to replace as an aerial fighter. The F-35 lost repeatedly in air-to-air maneuvering despite the fact that the test was rigged in its favor because the F-16 employed was the heavier two-seater version and was further loaded down with heavy, drag-inducing external fuel tanks to hinder its maneuverability. F-35 boosters argue that the plane's low radar signature will keep it out of WVR situations, but the history of air combat is that WVR engagements cannot be avoided altogether. Missile failures, the effects of radar jamming and other hard-to-predict factors tend to force WVR engagements time and again.