The F-35 Is Winning the War Against Its Greatest Foe (And Its Not Russia, China or Donald Trump) 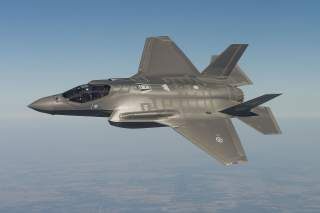 The new US President has taken a very hands-on approach to defense procurement, particularly in the case of the F-35 Joint Strike Fighter. On December 21, then-President-elect Trump met with the CEO of Lockheed Martin, Marillyn Hewson, after a casual tweet wiped billions off the company’s stock market value. Days later, Trump again took to Twitter to announce that he’d asked Boeing to propose a ‘comparable’ Super Hornet-based alternative to the F-35 (though analysts were quick to point out that the term was an oxymoron), and Lockheed’s share price suffered again—as did defense analysts worldwide.

President Trump’s latest claim is that he’s managed to shave US$600 million off the price of the next batch of F-35s; LRIP-10, or the tenth ‘low rate initial production’ order of F-35s. And for a program that only a month ago was being described as being "out of control" and "not very good", mirabile dictu, apparently the F-35’s now "a great plane" and the program is "in good shape". If only that sort of program management skill could be bottled.

But (like many others who’ve been watching the program closely) we don’t think this is the Lazarus-like recovery it’s being touted as. On December 20, the day before then President-elect Trump met with Lockheed Martin’s CEO, the head of the F-35 Joint Program Office, Lt. General Chris Bogdan said that LRIP-10 aircraft would likely be "somewhere on the order of 6-7% [cheaper] per aeroplane, per variant".

That hasn’t been lost on Defense commentators, who’ve already established that the LRIP-10 cost reductions announced by General Bogdan on December 20 would amount to roughly $600m in savings. It appears that President Trump is claiming credit (paywalled) for something that was going to happen anyway.

Mind you, a 6-7% percent cost reduction is still impressive, regardless of how it happened. And it’s consistent with a program that’s starting to hit its stride. As we’ve covered here on The Strategist, costs for all three F-35 variants have been coming down steadily, consistent with industry standard practice, for the past few years (F-35A here; B & C here). LRIP-9 aircraft reportedly cost 3.7% less on average than LRIP-8 aircraft, which were in turn 3.5% less than LRIP-7 aircraft.

Once the design and development is completed, the most important determining factors in reducing tactical aircraft production costs (or, for that matter, any manufactured good) are economies of scale, and refining the production methodology to reduce inefficiencies. Economies of scale works for the inputs to production; buying larger quantities of materials and components generally allows for more efficient ordering, and provides leverage to help drive down prices. LRIP-10 numbers are more than 50% higher than LRIP-9.

Improvements to the production methodology are often called the ‘learning effect‘. By working out new ways of doing things, and as the work force becomes more practiced at the hands-on elements of construction, each new aircraft is produced slightly more efficiently than the last, resulting in a gradual cost saving per aircraft which can result in big cumulative savings across the production run.

We need to separate out two different eras of F-35 price variations—something the Trump Administration seems to have been badly advised on. The comments about an ‘out of control’ program aren’t actually that far from the mark, but only if we’re talking about the period 2002–2010. The F-35 program has missed the cost that was initially promised by a wide margin. In fact, for the first eight years of its existence the program was something of a poster child for cost overruns and schedule delays. And it underperformed in part because it failed to reach the planned economy of scale for inputs. Rather than the projected 75-80% commonality of parts  across the three aircraft variants, in February last year General Bogdan put the number at around 20-25%. And schedule delays and deferred production numbers slowed production to the point where learning effects were badly compromised.

But that was then and this is now. The 2011 program restructure and management overhaul completely changed the picture. As our latest analysis showed, prices have been falling and production numbers increasing for the past few years. The chart above shows the recent USAF budget figures for the F-35A model, and shows that prices have been tracking close to the industry standard learning curve since 2014.

We can use the learning curve and the numbers of aircraft to be produced in the various LRIP lots to calculate the expected annual percentage price reductions. For the period 2017–19, during which components for the LRIP 10 aircraft will be purchased and assembled, we get an average figure of 6.7%. That’s entirely consistent with the number quoted by General Bogdan back in December—and in fact was probably the basis of his estimate. So it seems that President Trump isn’t claiming credit for something that happened a month ago. Rather, he’s taking retrospective credit for program improvements made over five years ago.