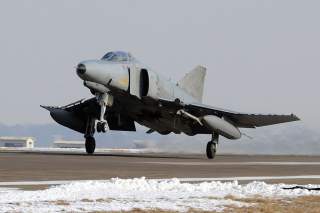 Had things gone differently, the U.S. Navy's top Cold War fighter jet could have been the F-8 Crusader instead of the F-4 Phantom.

But not the legendary Crusader that bested MiGs over North Vietnam. Instead, it would have been the XF8U-3, dubbed the Crusader III or the “Super Crusader,” a bigger, badder version of the F8U Crusader that the Navy flew in the 1950s and early 1960s.

The Super Crusader made its debut flight in June 1958. “The overall performance of the Dash III was outstanding,” says aviation writer Steve Pace in his history of the Crusader. “Officially the Dash III had a recorded top speed of Mach 2.39, unofficially Mach 2.6 was predicted. Some proponents felt Mach 3 was not out of the question. The Super Crusader was capable of continued Mach 2.2 speed at 68,000 feet. It demonstrated 6-G capability and continued 51/2-G turns at Mach 2.2. At the time, the -3 was the only single-engine fighter in the world capable of near Mach 2.4 speed.”

The Super Crusader differed from the Crusader I and II in a variety of areas. It had a more powerful JT-4 turbojet engine instead of a JT-3, which helped give the Crusader III a higher speed, climb rate and maximum ceiling. It also featured all-weather capability, longer range, more advanced flight controls, better maneuverability and two retractable ventral stabilizing fins. Chance Vought even proposed mounting a rocket motor in the Super Crusader’s tail for extra boost.

Ironically, Phantoms were found deficient in Vietnam because they weren’t armed with an internal cannon to supplement the unreliable early-generation air-to-air missiles. The Crusader I and II won plaudits because they did carry cannon—but not the Crusader III. Like the F-4, the Super Crusader was proposed as a cannon-less fighter armed only with seven air-to-air missiles: four Sidewinder heat-seekers and three Sparrow radar-guided weapons. Still, all-missile armament was the fighter fad in the years leading up to the Vietnam War, so the choice was understandable, if mistaken.

In mock dogfights, the Crusader III regularly defeated early-model Phantoms. Pace cites a Navy aviation expert who said, “The F8U-3 went farther, faster, it turned better, cost less, weighed less, and it would go as far on internal fuel as the F4H-1 could go with a 600-gallon external fuel tank. . . . The airplane was, I guess, 25 percent cheaper than the F4H. As I said, the F8U-3 was the best airplane we ever canceled.”

Yet the Navy ultimately chose the F-4 Phantom as its carrier-based fighter. Why? It couldn’t have been looks: the Super Crusader was a far sleeker aircraft than the pudgy Phantom. Perhaps it was economics as the Department of Defense in the early 1960s pushed for a common fighter for the Air Force, Navy and Marines.  Safety might have had something to do with it, too: the Crusader I and II were known for high accident rates.

Or was it because the Super Crusader was a hotshot dinosaur, a superb throwback to an earlier era of stick-and-rudder dogfights? For example, Sparrow missiles required painting the target with a radar beam. A Phantom pilot could leave this to his backseat weapons officer while he flew the plane: the pilot of a single-seat Super Crusader would have had to fly the plane and control the Sparrow. The Phantom was also more versatile, serving as a bomber, Wild Weasel air-defense killer and reconnaissance aircraft.

In fact, the F-4 was so remarkably adaptable and tough that the last U.S. military Phantom wasn't retired until December 2016. For all the speed and maneuverability of the Super Crusader, it is doubtful whether it could have remained relevant for fifty-eight years.

Somehow it seems appropriate that the Super Crusader prototypes ended their days pushing the frontier of flight for NASA. “Since the new Crusaders could fly above 95 percent of the earth’s atmosphere, they were naturally useful for space research,” writes Barrett Tillman in his book MiG Master: The Story of the F-8 Crusader.

“They were also engaged in sonic-boom intensity studies, but more sporting diversions were occasionally found,” Tillman writes. “The story is told that NASA pilots flying out of Langley, Virginia, gleefully bounced Phantoms undergoing evaluation at Patuxent River. The Navy test pilots reportedly complained, and the sport ceased. But it had made Vought partisans feel a little better.”