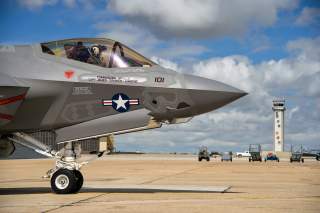 Even as the skies are becoming more crowded with airplanes and drones, the creaky U.S. air traffic control system is struggling to keep up. Hence the Federal Aviation Administration (FAA) has come up with a plan that requires aircraft to broadcast their positions to avoid mid-air collisions.

It seems like a sensible and long overdue approach to boosting air safety. But what if aircraft have good reason not to disclose their location? Or more specifically, what if they are military planes—and particularly stealth aircraft—on a mission that requires anonymity?

It's a dilemma between safety and secrecy that the Pentagon and FAA have failed to grapple with, according to a new Government Accountability Office (GAO) report.

The GAO examined how the military is implementing an FAA requirement for Automatic Dependent Surveillance-Broadcast. Aircraft equipped with ADS-B use satellite GPS to determine their location, speed and altitude, and then broadcast that information to ground controllers and other aircraft. In 2010, the FAA mandated that all civilian and military aircraft flying in U.S. national airspace must be equipped with ADS-B Out technology by 2020.

From the FAA's perspective, ADS-B makes sense. The agency can shut down its expensive ground radar stations: instead of tracking planes from the ground, planes will essentially track themselves. Yet like any GPS-based system, ADS-B has vulnerabilities, especially jamming, spoofing and hacking of GPS signals. Aircraft can magically disappear or change location, or conversely, fake ADS-B signals could create ghost aircraft to divert interceptors from, say, shooting down a suicide plane.

Yet the real question remains: should military aircraft be publicly visible at all times? "Information broadcast from ADS-B transponders poses an operations security risk for military aircraft," the GAO notes. "For example, a 2015 assessment that RAND conducted on behalf of the U.S. Air Force stated that the broadcasting of detailed and unencrypted position data for fighter aircraft, in particular for a stealth aircraft such as the F-22, may present an operations security risk."

In 2008, the Department of Defense warned the FAA that military aircraft "conducting special flights for sensitive missions in the United States and potentially compromised due to ADS-B technology. Such sensitive missions could include low-observable surveillance, combat air patrol, counter-drug, counter-terrorism, and key personnel transport."

It's not that there aren't solutions. The Pentagon has suggested masking military aircraft identifiers, allowing pilots to turn off ADS-B, exempting combat aircraft from being equipped with ADS-B, and maintaining the current system of ground radars.

Nonetheless, while the problem was identified ten years ago, a solution has yet to be implemented. "This is because DOD and FAA have focused on equipping military aircraft with ADS-B technology and have not focused on solving or mitigating security risks from ADS-B," the GAO said.

The FAA's 2020 deadline expires in two years, which doesn't leave much time. "The good news is that DOD and FAA are thinking about a number of potential options to resolve some of the vulnerabilities we found," Joseph W. Kirschbaum, director of GAO's Defense Capabilities and Management office, told the National Interest. "The bad news is that thus far, the priority has been on equipping schedules and not on critical security issues. But based on the response to our findings, I am optimistic that everyone is taking this more seriously."