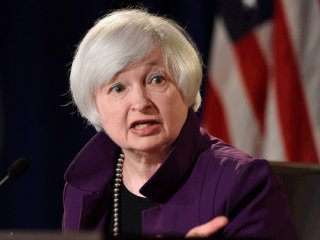 The Fed’s reaction to “global uncertainties” seems to have gone far beyond a momentary pause in increasing interest rates. As a slew of Federal Reserve officials made clear following their March decision, global economic volatility poses risks to the U.S. recovery. With little ability to combat a downturn, the Fed is forced to take global risks to its inflation and employment mandate seriously.

This is not the first time the Fed has reacted to global threats. In September of 2015, it cited “global economic and financial developments” and the downward consequences on inflation as reason to leave interest rates alone. And this is a legitimate concern for the Fed—stable prices are half its mandate, but anticipating how global developments will cause the Fed to act complicates the task understanding the future path of interest rates.

It would appear that defending the U.S. economy, and the mandates, from an overseas slowdown is one of the only battles left to fight. The “full employment” part of the mandate may not be entirely fulfilled, but it is also not too far off. The focus is now on risks to the inflation mandate.

Not all observers and commentators have accepted this nuance with open arms. The Fed has been repeatedly criticized for being too opaque with how it makes policy decisions. There has even been a push to tie the Fed’s decision making to a “rule”, and force officials to defend any deviations from policies prescribed by them. One such rule—the Taylor Rule—was openly discussed as a choice by Congress, and its namesake even made a hearing appearance to defend its use. Yellen has vehemently opposed such a plan, citing the need to maintain an independent monetary policy.

In many ways, however, the Fed has already couched its approach to the global economy within the parameters of a rule-based system—even the Taylor Rule to a degree. Granted, it hasn’t laid out the function explicitly, but the principle components—the mandates and weights placed on them—were addressed by the Fed either in the statement following the its meeting, or through communication in the following days.

The Taylor Rule requires inputs to suggest a policy rate for the Fed. The first is the “neutral real rate” of interest (the level that allows the economy to run near potential without slowing it down or speeding it up). This number, of course, can be debated, but—according to Yellen—it is currently around 0 percent. Real interest rates are well below that point at the moment, reflecting the Fed’s assessment that the U.S. economy is operating below its potential.

As Chicago Fed President Charles Evans made abundantly clear in his April 5 speech in Hong Kong, despite being at 5 percent unemployment, the full employment mandate probably has yet to be fulfilled. This is an indication of a Fed operating under the assumption that individuals will be reentering the labor force, making a further reduction of the unemployment rate much more difficult, and putting upward pressure on wages.

Bringing it back to the Taylor Rule, the spread between unemployment and its inflation-neutral level is used to impute an output gap. A weight—an importance—is placed on the gap. In stating that employment is almost to target, Evans is likely arguing for a reduction in weight assigned to the output gap. Essentially, this places the policy emphasis squarely on inflation.

This is where global volatility becomes a significant factor, because global volatility feeds most directly through the inflation piece of the Taylor rule. When China undertook its devaluation in the summer of 2015, fear of a deflationary cycle took hold. It impaired the reflation in Europe and Japan and threatened to derail the U.S. recovery, prompting the Fed to pause as the inflation portion of its mandate came under pressure.

The United States had already experienced a disinflationary shock from oil, but there is a critical difference between the pressures emanating from oil and those from the rest of the world. Oil causes transitory disinflation, but it remains unclear if the pressure from China and the slowing global economy will be transitory or persistent. The Fed is increasing both the weight placed on the inflation gap—the distance between the Fed’s target and the current rate of inflation—and its target for inflation as well.

If inflation is going to be more volatile, increasing the target would more allow volatile inflation to be safely above a level where a one-off shock could force the Fed to reverse course. With inflation running below target, the target being moved higher, and more weight being placed on the mandate relative to the employment mandate, any downward movement in inflation and inflation expectations would give the Fed pause.

By citing global uncertainty (again), the Fed is not looking for a way out of raising rates. Instead, the Fed is articulating how it will react to incoming global data given the increasing uncertainty surrounding its ability to sustainably accomplish its domestic mandate. In a sense, the Fed has adopted a flexible policy rule that allows for it to adapt to differing circumstances. Yes, the Fed’s job only relates to the domestic economy. But the U.S. economy cannot reasonably ignore what is going on abroad.