The First Target on the F-35 Stealth Fighter's Hit List: The Islamic State? 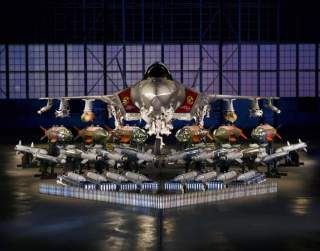 A U.S. Air Force Operational F-35A may soon attack ISIS over Iraq and Syria, fly to the Baltics as a deterrent against Russian aggression or deploy to the Pacific theater as part of a key force posture build-up, service leaders said.

“We have a global force management process. The F-35 move into the Middle East is scheduled further down the road. If a combatant commander needed it sooner they would ask for it,” Gen. Herbert J. "Hawk" Carlisle, Commander of Air Combat Command, told reporters.

While actual combat deployment could be imminent or several years away, declaring the new stealth multi-role fighter operational means Combatant Commanders around the globe do now have the ability to request the F-35A when mission demands require its abilities, he explained.

This means that the operational aircraft is now ready for combat and could soon be called upon to meet mission requirements in the ongoing air campaign against ISIS. Although the US-led coalition already enjoys air superiority over Iraq and Syria, the F-35 could be useful firing laser-guided air-to-ground weapons or drop GPS-guided bombs on identified ISIS targets. This would involve the additional combat deployment of Joint Direct Attack Munitions, or JDAMs. Precision and laser-guided air-to-ground weapons such as the Paveway II, a dumb munition converted into a precision-guided missile which made up more than one-half of the air-ground precision weapons fired during Operation Iraqi Freedom. The weapon has already been successfully test fired from an F-35.

Alongside the Middle East and Europe, Carlisle also addressed the prospect of moving F-35s to the Pacific Theater, explaining that groups of F-35s could go to the region as part of what the Air Force calls “Theater Security Packages.”

“These small deployments of about four ships are dispatched rapidly to global hotspots when needed. It's kind of like providing the Combat Air Forces on tap. It's possible that the F-35A's first combat deployment will be in one of these TSPs,” Benjamin Newell, spokesman for Air Combat Command, told Scout Warrior.

Carlisle explained the potential deployment of F-35s to Europe and other strategic locations in terms of a prior move to deploy the F-22 to Europe as a deterrent against Russian aggression.

“When you send F-22s to the European theater last fall, it was great messaging that goes along with that.

Sending an F-35 would reassure friends and allies. It is a deterrent to potential adversaries. I don't think it is provocative at all,” Carlisle said.

In addition to functioning as a deterrent in key global locations, the F-35 could readily be called upon to perform the widest possible range of missions, Carlisle added.

For instance, should the F-35 attack ISIS, it would be in a position to use both high-altitude precision-guided air-dropped bombs and also use its 25mm gun and other weapons to perform close-air support missions.

The Air Force is now preparing to increase its number of operational F-35s in order to better refine tactics, techniques and procedures, or TTPs.

“The F-35A is fully combat capable now, and can perform missions as requested by combatant commanders. Our next hurdles are to ramp up the forces to provide an adequate number of aircraft to create a working fleet, on which we build TTPs, test new weapons and most importantly, train adequate numbers of Airmen who are the experts in their assigned platform,” Newell explained.

In order to make this happen, the service would need 2 full fighter wings consisting of 144 aircraft and 6 squadrons.