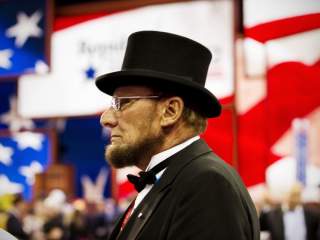 Even as Donald Trump expresses the pious wish “I hope it doesn’t involve violence,” this summer’s Republican convention in Cleveland is widely anticipated to be a tumultuous one. The Democratic convention in Philadelphia could also become rather fractious if Bernie Sanders’s followers decide to turn on Hillary Clinton. But this would hardly be the first time in American history that a political convention took an unusual turn. Here’s a look at the five most heated conventions from the past.

The first national convention of elected delegates took place in Baltimore in December 1831. While it wasn’t violent, the convention did take some peculiar turns. It was composed of Antimasons representing thirteen states. After a number of candidates declined the nomination, the Antimasons chose William Wirt, a former Attorney General under James Monroe, as president and Amos Ellmaker for vice president. According to the late historian Eugene H. Roseboom in his valuable A History of Presidential Elections, “Wirt’s statement accepting the nomination virtually repudiated the party’s principles.” Nor was this all. The Antimasons may have established America’s most beloved political event but they never conducted another one. Instead, Andrew Jackson swept to victory, promising to eliminate “ragg, tagg banks.”

Then there is the convention of 1839. It gathered at Harrisburg, Pennsylvania. Henry Clay wanted the nomination, but his followers were outfoxed by General William Henry Harrison, who had fought at the battle of Tippecanoe and the War of 1812. Clay declared, “It is a diabolical intrigue, I know now, which has betrayed me. I am the most unfortunate man in the history of parties: always run by my friends when sure to be defeated, and now betrayed for a nomination when I, or any one, would be sure of an election.” According to Roseboom, “he had been shabbily treated, but should not have been surprised. The northern politicians, and behind them, the conservative business interests, wanted victory…. Clay was not their man.”

By the 1850s, the internal tensions in America made the 1830s look like a polite tea party. The Know-Nothing party emerged, the product of secret organizations like the Order of the Star Spangled Banner. It was anti-Catholic and anti-immigrant. Naturalization of immigrants was supposed to be prolonged to no less than twenty-one years. The party, which had become known as the American party, split over the Missouri Compromise. It held a convention in June but was eclipsed by the Republicans, who held one in Pittsburgh in February. By June the Republicans held their first national convention and nominated John C. Fremont. The convention was so divided, however, that it took months to decide between two candidates for vice-president.

Not to be forgotten is the convention of 1912. It revolved around the battle between Theodore Roosevelt and his former protégé William Howard Taft. Mentor and mentee had become bitter enemies. In February, Roosevelt declared, “My hat is in the ring.” According to Roseboom, “On February 24, he announced that he would accept the nomination, and the greatest pre-convention struggle in American history was on.” Direct primaries immeasurably assisted Roosevelt’s chances. He won in Ohio, Illinois, and Pennsylvania. Sounding like Donald Trump today, Roosevelt claimed that he was robbed at the national convention in Chicago. Roseboom explains what happened with clarity: “Control of the national convention depended on the decision of the national committee as to the contested seats. If it seated the Taft contestants until the convention could elect its officers, and gave them the right to vote on these preliminaries, the Taft forces would get control and, through the committee on credentials, would award the disputed seats permanently to their partisans.” At least fifty Roosevelt adherents lost their seats. Pandemonium threatened: “Squads of police were present to uphold the rulings of the chair. … Few present knew of the concealed barbed wire under the decorations around the railings to the rostrum,” says Roseboom. “We stand at Armageddon,” Roosevelt declared to a raucous crowd, “and we battle for the Lord.” But divine inspiration landed upon Woodrow Wilson, himself the son of a preacher, in 1912 as Taft and TR fought it out.

Fifty-eight years later Chicago was once more the site of a national convention. This time it was the turn of the Democratic Party to watch its electoral chances dissipate as student radicals clashed with Mayor Daley’s police. Roseboom reports that Daley had turned the “International Amphitheatre into a fortress protected by seven feet of barbed wire, an army of security guards, and electronic credential scanners at check points. The Chicago police force of nearly 12,000 was put on twelve-hour shifts, and 5,600 national guardsmen and 7,500 federal troops were being kept in reserve for riot duty.” Battles between the police in Lincoln and Grant parks, not to mention an attempt to stage a march at the Hilton hotel, cast a distinct pall over the proceedings as an aghast country watched the radical left in action.

So will this summer’s conventions follow a similar trajectory? If they do, it will be in keeping with some longstanding American traditions. A look at the past suggests that there’s plenty of precedent for both violence and charges of delegate fraud.