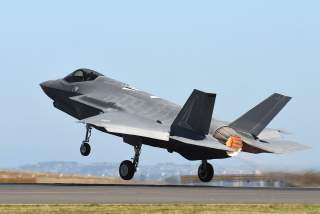 On August 27, 1939, a stubby-winged airplane made of unpainted steel alloy took off over Germany and soared into history. Instead of a pointy propeller hub in the nose, the Heinkel 178 had an open-mouthed turbojet intake, making it the first operational jet-powered aircraft.

The He 178 could only attain 380 miles per hour—only 10 percent faster than the Messerschmitt 109E piston-engine fighters then in service. Nearly eighty years after the Heinkel jet’s first flight, fourth- and fifth-generation jet fighters are capable of flying well over 1,500 miles per hour, can launch guided missiles at enemy fighters dozens of miles away, and carry bombloads that far exceed the capacity of the four-engine strategic bombers of World War II.

Turbojets generate thrust by compressing air, mixing it with fuel and blasting the explosive results through a turbine. However, early jet prototypes like the He 178, the American P-59 and the British E.28/39 were not much faster than contemporary piston-engine fighters.

It wasn’t until 1944 when Germany deployed the twin-turbojet engine Messerschmitt Me-262 into combat. With a maximum speed of 540 miles per hour, the 262 could easily outrun Allied fighters, but Nazi Germany lacked the industrial capacity and fuel supplies to put many into service. The only other country to combat deploys jets in World War II was the United Kingdom, though its Gloster Meteor was relegated to shooting down V-1 cruise missiles.

Early subsonic jets like the P-80 and F-84 were limited by the use of straight wings perpendicular to the fuselage. However, at speeds approaching or exceeding the speed of sound, swept-back wings help delay drag-inducing shockwaves. By the Korean War in 1950, American and Communist forces were flying agile swept-wing F-86 Sabre and MiG-15 fighters up to just below the speed of 680 miles per hour.

However, the air battles over Korea were still fought in a way similar to those of World War II, with pilots engaging in swirling dogfights using machine guns and cannons. This would soon change.

These second-generation jet fighters were specialized according to the prevailing grim expectations of horrifying nuclear war. On one hand, designers developed extremely fast (but not very maneuverable) interceptors like the Soviet Sukhoi Su-9, the British Electric Lightning, the delta-winged French Mirage III and the American Lockheed F-104 Starfighters. These were intended to quickly zip up to enemy strategic bombers and knock them out of the sky before they could drop their nuclear payloads.

The interceptors increasingly came with onboard radars—formerly reserved for specialized night fighters and antisubmarine planes—and could use early, primitive guided missiles. These included longer-range radar-guided weapons, some even bearing nuclear warheads, and short-range heat seekers that were effective when pointed at the rear exhaust of enemy aircraft. The first air-to-air missile kill was scored in 1958, when a Taiwanese F-86 used a heat-seeking AIM-9B Sidewinder to splash a Chinese MiG-17 over the straits of Taiwan.

At the same time, the Cold War adversaries foresaw massive land battles on the frontlines of the Cold War, and developed short-range fighter-bombers to strafe ground targets and shoot down rival tactical aircraft.Notable supersonic examples included the F-100 Super Sabre and the MiG-19, but sturdy subsonic ground-attack jets like the A-4 Skyhawk and Su-7 also saw extensive action.

By the 1960s, it became increasingly clear that the days of high-flying strategic bombers were numbered, thanks to long-range surface-to-air missiles. Therefore, demand for specialized interceptors waned as well, though the Soviets continued to build Su-15 and Tu-128 interceptors to guard their vast frontiers. Instead, designers focused on powerful new jets that could do it all by leveraging early analog computer systems, new in-flight refueling technology and better air-to-air missiles.

The huge two-seat F-4 Phantom epitomized this new paradigm; its twin J79 turbojets gave it maximum speed 2.25 times the speed of sound (1,473 miles per hour). It could heft over eighteen thousand pounds of bombs, and compensated for its short range with inflight refueling. Its radar allowed it to engage enemy fighters up to twenty-two miles away with AIM-7E Sparrow missiles. The Phantom and its contemporaries could also employ early precision-guided air-to-ground weapons.

However, while the Phantom could go extremely fast, it was not very maneuverable—and the guided missiles exhibited especially low hit rates in air battles over Vietnam. The Phantom initially struggled to maintain a favorable kill ratio against more agile North Vietnamese MiG-17s and MiG-21s. The Soviet Union went even faster and heavier with the MiG-25 Foxbat, which could fly up to Mach 3. But despite its blinding speed, the Foxbat was even clumsier than the Phantom and performed unexceptionally in combat over the Middle East.

Air battles over the Middle East and Vietnam made it clear that jet fighters needed to be both maneuverable and fast. Designers in the sixties and seventies began seeking to balance both qualities while implementing electronic fly-by-wire controls that could mediate the pilot’s commands and automatically compensate for more agile but aerodynamically unstable airframes. Turbojets engines were superseded by compressor-bypassing turbofans that were more efficient at all but very high speeds.

Breakthroughs in avionics also revolutionized aerial warfare. Powerful new Doppler radars gave fighters “look down, shoot down” capability against low-flying aircraft, while electronic-warfare suites protected them from enemy missiles. Heads-up displays and hands-on-throttle-and-stick controls allowed fighter pilots to focus on flying without having to glance down at their instrument panels. Improved air-to-air missiles such as the AIM-7F and AIM-120 finally gave jet fighters reliable capabilities beyond visual range.

This all amounted to a nearly insurmountable edge over earlier generations. In a 1982 air battle over the Bekaa Valley of Lebanon, Israeli fourth-generation F-15s and F-16s shot down around a hundred Syrian second- and third-generation MiGs and Sukhoi fighters for no loss.

At the same time, precision-guided munitions like the Maverick missile or laser-guided Paveway bomb dramatically improved effectiveness against ground targets, especially point targets like an armored vehicle. Guided munitions also meant that attack jets no longer needed to dive close to the ground to release weapons on target—allowing fighters to pound the enemy from on high outside the range of antiaircraft guns and shoulder-fired missiles. While more than 474 advanced F-4 Phantom jets were shot down by mostly low-tech ground fire over Vietnam, not even one American F-15 or F-16 has been lost to enemy fire during long-running air campaigns in the twenty-first century.

Initially, designers continued to produce aircraft with pure air-superiority roles like the early-model F-14 Tomcat, the F-15 Eagle, the MiG-31 and the Su-27s, all twin-engine designs. However, it soon became clear that this was out of step with the high demand for ground-attack capability, and by the 1980s new variants were built as multirole fighters. Cheaper, shorter-range but highly maneuverable Mach 2 tactical fighters like the MiG-29, and the single-engine Mirage 2000 and F-16 Fighting Falcon, also proliferated.

Even as the fourth generation perfected jet-fighter design, the American manufacturers began producing aircraft that minimized radar cross-section, making them extremely difficult to detect on radar. The first two operational stealth planes, the F-117 Nighthawk and B-2 Spirit, were bombers designed to infiltrate enemy air defenses, which depended on radar-directed fighters and radar-guided missiles.

By the 1990s, the Pentagon was ready for an air-to-air stealth fighter, leveraging computer-assisted design and manufacturing technologies. The resulting F-22 Raptor was a super fighter, with speed and maneuverability matching or exceeding that of fourth-generation jets, while boasting a radar cross-section so small that its adversaries were unlikely to detect one approaching, and lacked the capability to fire back except at short range.

The F-22, however, was extremely expensive, so it will be followed with the ostensibly cheaper multirole F-35 Lightning II. The Lightning II has been criticized for having flight characteristics slightly inferior to fourth-generation fighters, as well as its eye-watering price tag. However, it does boast much more modern avionics and, like the Raptor, is intended to take out aerial adversaries before they are able to shoot back. Unlike the F-22, the F-35 is poised to see service in numerous air forces across the world.

Only two other countries currently possess operational stealth fighters. Russia is producing a dozen Su-57 stealth fighters, which are more maneuverable but less stealthy than an F-22; however, their development has been beset by major delays and technical shortfalls. Meanwhile, China has officially declared its large Chengdu J-20s stealth jets operational. These appear designed for high-speed, long-range missions.