The GOP Fights Back 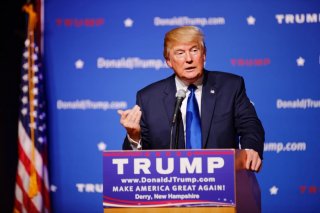 This was the debate in which the Republican mainstream began to retake control of the primary process and, by extension, their party. After seeing Donald Trump soar in the polls for too long, the GOP’s “establishment” candidates finally seized the opportunity to lambaste Trump in a public forum and make the case for his dismissal. Their concerted efforts fell far short of an all-out assault and might not put a dent in Trump’s popularity right away, but the opening salvo unmistakably has been fired. In time, this might well be remembered as the inflection point after which Trump’s political fortunes began to dwindle.

American political parties are a strange thing indeed. They are not private members’ clubs in the same way that parties are in most Western democracies; one does not “join” the Republican or Democratic parties, but instead registers an affiliation with local authorities. Parties in the United States are quasi-public institutions; almost uniquely in the democratic world, their internal rules, regulations and processes are determined by state legislatures and not party regulars. It makes no sense to talk about party “membership” but rather party “identification.”

All of this makes parties in the U.S. vulnerable to entryism—that is, infiltration and subversion by people who might not have the best interests of the party at heart.  Especially in states that hold open primaries, for example, so-called “party crashing” can take place, whereby voters take part in the opposing party’s primary in hopes of electing the worst possible candidate. But as the current GOP primary contest has shown, candidates, too, can hijack the machinery of political parties. The best example, of course, is Donald Trump—a man who previously identified with the Democrats but now hopes to lead the GOP into battle in 2016.

It’s very easy for so-called “outsiders” like Donald Trump, Ben Carson and Carly Fiorina to run under the GOP label; simply put, there are few mechanisms to stop them from doing so. All that is needed is funding and some perfunctory collection of signatures. There is no real selection process; no formal vetting process; and no mechanism by which Republican grandees can eject a candidate from the party.  With sufficient funds and grassroots public support, it is actually fairly straightforward for erstwhile non-partisans to attempt the hijacking of an entire party.

The porousness of political parties has limits, of course. Usually, party establishments conduct an informal vetting process of candidates during the “long” primary process. Funds can be disbursed or withheld; endorsements can be used to signal candidates’ suitability for office; and candidates must compete for a finite number of party-affiliated advisers and campaign staffers.  In effect, party leaders try to use their control of political resources to stymie the progress of undesirable candidates and boost the chances of establishment figures.

Until now, Trump’s “hostile takeover” of the GOP has seemed immune from these usual processes of asserting party discipline. Trump is able to fund his own campaign, has brought in outside advisers—and, in any case, seems not to put much stock in refining specific policies and talking points at this point during his campaign—and has been able to use his massive poll numbers as a shield to ward off establishment attacks. Equally importantly, no major interest group within the Republican fold has come out against Trump—yet.

The establishment has been done no favors by Trump’s own rivals, of course, who have shown marked timidity when confronting the billionaire tycoon.  Last month, it fell to Fox News to lead the charge against Trump’s candidacy. At the first GOP debate in Ohio, it was Megyn Kelly and her colleagues who sought to expose Trump as a self-serving individual and fair-weather Republican. But with the possible exception of Rand Paul, the candidates themselves pulled their punches. Since then, potshots against Trump have been relatively few and far between.

Last night’s CNN debate might have signaled something of a sea change in this regard.  Trump was confronted like never before. Again, however, the party regulars were assisted by the moderators: Jake Tapper’s first question focused on whether Trump was trustworthy of holding the country’s nuclear codes, and his second question asked whether Trump was a serious candidate. Several other set-pieces to invite criticism of Trump followed throughout the evening.

Initially, it was Rand Paul who showed the most willingness to attack Trump, albeit after Trump—entirely unprovoked—attacked Paul first. Scott Walker distinguished himself early on by going after Trump on his own volition (“just because he says something, doesn’t make it true”) while Jeb Bush probably emerged from the debate having landed the most punches, although Carly Fiorina’s dignified response to Trump’s pugnacity certainly stood out.

More importantly than the candidates’ collective willingness to harangue Trump, however, was the fact that the debate, for the most part, was not even about Trump. Issues such as foreign policy, defense policy, the legalization of marijuana, Planned Parenthood and even illegal immigration took place with relatively little input from Trump. In fact, Trump was very quiet and even marginalized towards the end of the debate—good news from the perspective of the GOP mainstream, which needs to project an image of competence and steadiness and avoid the perception that Trump’s coup d’état is already a fait accompli.

When Trump did expound at length, his answers were predictably rambling and short on detail.  This was especially true of his foreign policy answers, which helped to draw a stark contrast between Trump and Carly Fiorina and Marco Rubio, for example, who both made a point of being specific and sounding well-versed on foreign policy. Trump’s prediction that he would “get on” with Vladimir Putin is unlikely to go over well with the GOP base and he had little interesting to say about China or Iran. For a party that has long made national security its “killer app,” Trump’s failure to grasp even basically appealing talking points bodes ill for his campaign.

Indeed, one of the main things to come out of the CNN debate might be that Trump’s biggest vulnerability is on foreign policy. This is an area where establishment figures can paint Trump as out of touch and reckless without having to change anything about their own policies. Perhaps the biggest cheer of the night, in fact, was in response to Jeb Bush defending his brother’s national security record against Trump’s barbs—suggesting that W.’s brand of hawkishness is not altogether out of fashion in Republican circles.

Moving forward, the Republican establishment will have to intensify its scrutiny of Trump’s positions in order to convince GOP voters to ditch him as a champion of their concerns. It won’t happen overnight; Trump’s bottomless source of funds and his willingness to stake out unrealistic but highly populist positions will ensure that he remains a formidable contender for quite some time. But taking back the primary process can’t be done by simply waiting for Trump to implode. His appeal and his support needs to be undermined. This work cannot be performed by the media alone; at some point, it will be the party itself that needs to deal the fatal blow.