The GOP Must Stop Legal Birthright 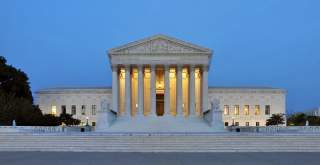 The Chicago Department of Public Health, like its counterparts in all major cities, is quite open about the availability of taxpayer-funded care for pregnant women who are in the country illegally. Hospitals cannot ask about a patient’s immigration status, or even for a social security number. Pregnant women are eligible for Medicaid, the State of Illinois will not report their presence to the Department of Homeland Security (DHS), and best of all, their newborn children are considered American citizens. For poor pregnant women from most of the world, this is like winning the lottery. For the children, birthright citizenship means a lifetime of publicly funded benefits, and at age eighteen, the right to sponsor their parents for lawful permanent residency.

It is estimated that up to 400,000 babies are born in this country each year to mothers here illegally. In some Texas hospitals, they account for 70 percent of births. This is the “birth tourism” industry—the result of our peculiar policy of “birthright citizenship.” Anyone born on U.S. soil (or abroad, if to parents who are citizens) is a citizen, regardless of the legal statuses of their parents. Many other countries have abandoned it, including the United Kingdom, Ireland and Australia. The most bizarre aspect of this law is that Congress has never passed it, and the country was never allowed to weigh in on the issue. It has simply evolved from an 1898 Supreme Court decision (U.S. v. Wong Kim Ark) concerning a lawful permanent resident. To this day, there has never been a statute or court decision providing for birthright citizenship for the children of illegal immigrants, and here I hope to show we can and should pass a law to end it.

In the 1850s, the Supreme Court had maintained that blacks were not citizens (Dred Scott v. Sandford, 1857), which had to be addressed after the Civil War. Congress realized this could not simply be undone by a law. The Constitution had to be amended to overturn the decision. The amendment was written broadly: “All persons born or naturalized in the United States, and subject to the jurisdiction thereof, are citizens of the United States and of the State wherein they reside.” [Emphasis added]. But what did the italicized clause mean?

The congressional debate makes it quite clear that the Senate sponsor of the Amendment, Lyman Trumbull (R-IL), did not believe it would apply to foreigners, unless they had renounced their ties to their home nations. When asked what the phrase “subject to the jurisdiction thereof” meant, he answered, “not owing allegiance to anybody else.” He believed the amendment would grant citizenship to the children of Chinese immigrants living in California.

Did he mean to create birthright citizenship for illegal immigrants? I don’t think so, though the question was never brought up. There was no illegal-alien problem at the time. The Chinese Trumbull was referring to had come to the United States legally and settled in the West, particularly California. We had de facto open borders until 1875, and immigrants were welcome, especially if they would provide cheap labor in the mines and railroads. Trumbull was distinguishing legal permanent immigrants from visitors intending to return home. The latter group still owed allegiance to their native countries. So in his view, citizenship was a consensual act.

The 1866 Civil Rights Act, passed at the same time to crack down on the Ku Klux Klan, provided that people born in the country “and not subject to any foreign power” rather than “subject to the jurisdiction thereof, ” were citizens. I do not know why that phrase, which plainly excludes illegal immigrants, was not used in the amendment. But no historian or court has ever concluded the amendment meant something different. If we accept that premise, that “subject to the jurisdiction thereof” means not “subject to any foreign power” then the Supreme Court made an historic blunder in its famous Wong Kim Ark decision. By a 5-2 vote, it decided that “subject to the jurisdiction” meant everyone on U.S. soil, except foreign troops and ambassadors. It did so in deciding whether the son of two Chinese immigrants, who had entered the country legally and whose child born in San Francisco, was a U.S. citizen. Under the original understanding of the Fourteenth Amendment, as enunciated by Trumbull, he was.

But if the Court had followed its two prior decisions interpreting the phrase “subject to the jurisdiction thereof,” it would not have enunciated such a broad rule and would once again have recognized foreigners are not subject to U.S. jurisdiction, unless they are here legally and intend to remain here more or less forever (i.e. citizenship by consent, rather than by place of birth).

Now, more than a century later, are judges required to adhere to Wong Kim Ark’s interpretation of the phrase “subject to the jurisdiction thereof”? The question basically answers itself. If the Court was free to change its interpretation from its earlier decisions in deciding Wong Kim Ark, then why can’t today’s justices do so again? The Supreme Court reverses itself in interpreting the Constitution, most recently in Citizens United three years ago (as to whether corporations have First Amendment rights).

The Court also consistently says the doctrine of stare decisis (following precedent) is at its weakest when interpreting the Constitution. Such errors can have grave and irremediable consequences, since they cannot be undone by Congress. So the Supreme Court should feel free to revisit them. Why not test Wong Kim Ark? The consequences of this decision are costing us billions of dollars a year, and what are its benefits?

And if the Court wanted to take an easier route to reconsidering Wong Kim Ark, it could just focus on the word “jurisdiction.” It has recognized that is one of the most overused and misused words in the legal lexicon. Definitions of jurisdiction in the current Black’s Law Dictionary spill over five pages, and none of them seems to apply to the concept of national power over foreigners as used in the amendment.

How should the Court interpret the phrase “subject to the jurisdiction thereof” today? An originalist Court would not be bound by a modern dictionary. It would look at original sources from the ratification period to discern what they intended. Trumbull's statement and that of his colleague Sen. Jacob Howard (who was credited with actually writing the amendment)—that jurisdiction “will not, of course, include foreigners”—would be given considerable weight. As Justice Antonin Scalia and his colleague Bryan A. Garner say in their new book on interpreting legal texts:

“Originalism is the only approach to text that is compatible with democracy. When government-adopted texts are given a new meaning, the law is changed; and changing law, like adopting written law in the first place, is the function of the first two branches of government—elected legislators.”

I also pay very close attention to how legal realists interpret text. Judge Richard Posner considers himself a realist, and he thinks birthright citizenship “makes no sense” and can be abolished by statute.

If the Senate flips to Republican control next month, and the party wants to try its hand at its version of “immigration reform,” then this should be very high on the agenda. It might also require hospitals to collect social security numbers of patients and report the admission of those who don’t have them to the DHS. Those two reforms would end the thriving “birth tourism” industry. It can’t come too soon.