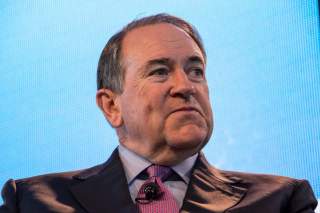 Wednesday night’s Republican primary debate was a grueling three-plus hour ordeal in which foreign policy received substantial coverage. Unfortunately, it was also full of misleading oversimplifications, and policy prescriptions which themselves seemed to be based on an understanding of foreign affairs no more nuanced than soundbites. By relying on such simplistic half-truths, candidates give us no idea of how they would truly handle a range of complex international issues, and worse, send the impression that they don’t even understand such complexity exists.

Thanks to the many inane questions – asking candidates to choose their own Secret Service nicknames stands out as particularly fatuous – the debate seemed at times more akin to a beauty pageant than a political forum. It certainly included the usual string of incorrect or semi-true facts on foreign affairs. Donald Trump, perhaps unsurprisingly, followed up his inability to tell the Quds Force apart from the Kurdish people with an assertion that Iran is an Arab state. Ted Cruz reiterated a number of key falsehoods on the Iranian nuclear deal, chief among them the debunked idea that Iran will be permitted to inspect its own nuclear facilities.

Marco Rubio asserted that North Korea has “dozens of nuclear weapons and long-range rockets that can already hit the very place in which we stand tonight.” This is a tenuous conclusion at best; it’s still unclear if North Korea has such a capability. And it will no doubt come as a surprise to the Marines already forward deployed in various countries around the world that Ben Carson believes the Marine Corps is “not ready to be deployed.”

Yet factual errors are common in debates, and are typically caught by journalists. The more insidious problem with last night’s foreign policy discussion was the oversimplified and misleading premises upon which many of the candidates appear to be basing their foreign policy positions.

Chief among these is the idea that the U.S. military is weak, or needs to be strengthened substantially. Ben Carson noted that “our Air Force is incapable of doing the same things that it did a few years ago. Carly Fiorina argued that “we need the strongest military on the face of the planet,” while Marco Rubio noted that “… we are eviscerating our military.” Such claims are entirely false: the U.S. military is among the world’s largest, spending more than the next 13 countries combined in 2013 (including China and Russia)!

Today, the United States makes up 38.4% of all global military spending, and spends substantially more on the military than it did on average during the Cold War. The idea that the U.S. military is weak may be attractive to candidates – especially those who wish to appear strong by proposing increases to the military budget – but this assertion merely encourages us to pour unending amounts of money into the military budget without considering necessary reforms.

A second false premise was perhaps expressed best by Jeb Bush, who noted that “when we pull back, voids are created. We left Iraq… and now we have the creation of ISIS.” Again, this narrative is convenient for many candidates, allowing them to blame President Obama’s troop withdrawals, rather than the initial disastrous decision to invade Iraq, for the rise of ISIS. Unfortunately, it is similarly false: Iraq’s sectarian problems existed long before the U.S. withdrawal of troops in 2011, and the rise of ISIS is at least partly a result of the Bush administration’s decision to disband the Iraqi army.

This is another dangerous idea, as it promotes the idea that U.S. intervention doesn’t lead to chaos, but that the absence of intervention might. Donald Trump echoed this idea with regard to Syria, arguing that “had we gone in with force, done something to Assad… you wouldn’t have millions of people displaced all over the world.” Yet the NATO-led intervention to overthrow Muammar Gaddafi in Libya shows how erroneous this argument can be: the intervention has certainly not prevented violence or extremism from growing inside Libya.

A third misleading idea expressed by many candidates was the idea that there are some states which are so evil that we should not conduct diplomacy with them. Carly Fiorina, for example, when asked how she would deal with Russia, responded that “having met Vladimir Putin, I wouldn’t talk to him at all. We’ve talked way too much to him.” Various candidates expressed their continued intent to ‘rip up’ the Iranian nuclear deal on their first day in office, and their refusal to negotiate with Iran.

This rejection of diplomacy with difficult actors would no doubt come as a shock to the man in whose presidential library the debate was held. Reagan may have used strong rhetoric, but he also negotiated successful arms control agreements with the USSR. It may be true that war is merely a continuation of diplomacy by other means. Yet the candidates on stage often seemed dangerously willing to dispense with diplomacy entirely.

A number of other ideas expressed by candidates were similarly divorced from reality, from the idea that today’s world is more dangerous than ever, to the idea that ISIS poses an existential threat to the United States, or as Mike Huckabee noted, to the survival of Western civilization. And though soundbites and heated rhetoric are to be expected from candidates, it is unfortunate that so many of this year’s crop of GOP contenders earnestly appear to believe – and base their policy prescriptions – on such misleading premises.

Ultimately, when candidates rely on such an oversimplified and misguided picture of foreign affairs, the debate itself is largely useless. Foreign affairs are complex and nuanced. Reasonable people can debate the merits and flaws of U.S. interventions, or the appropriate size of the U.S. military. Candidates who rely on misleading narratives and oversimplifications of foreign policy cannot contribute to such debates. America’s voters deserve better.

Emma M. Ashford is a visiting research fellow at the CATO institute.