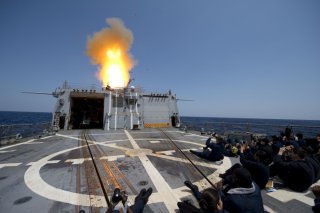 The issue of ballistic missile defense (BMD) was a controversial one when U.S. President Reagan first advocated a strategic-level system in the early 1980s. It remains so today—defenses against theatre- and tactical-range missiles are gradually improving, but no effective strategic-level system is in sight. Consequently, mutual deterrence will continue to define great-power nuclear relations for many years to come.

What’s Australia’s interest? We live a long way away from most current ballistic missile arsenals. But the Australian Defense Force (ADF) frequently deploys within range of ballistic missile systems, especially in Northeast Asia or the Middle East, and those systems might proliferate more widely in the future.

We have two questions to decide. The first is the priority for enhancing the ADF’s own BMD capabilities. The second is whether it makes sense for us to participate in a cooperative arrangement with the U.S. or other partners.

In evaluating the effectiveness of BMD systems, there are three main factors to consider: the range of the ballistic missiles, the sophistication of countermeasures that the missiles employ, and the number of missiles employed in an attack. BMD systems have a good chance of working against a small number of short-range missiles with simple (or no) countermeasures. But the defensive task gets rapidly harder against more complicated attacks, and even defenses that are effective against small attacks can easily be overwhelmed by larger ones. In the most challenging case—an attack that involves a large number of long-range missiles with sophisticated countermeasures—the defense has no chance of protecting the target. Those factors mean ballistic missiles will retain strategic potency for years to come—and could prove to be an especially disruptive technology in a maritime area-denial role.

At the moment, defenses lag behind the capabilities of offensive missile systems. Whether the gap can eventually be bridged is an open question (although potential saturation of the defenses will always be a problem). But a system of only limited capability can still have important effects. As well as providing a measure of defense against forces with limited missile numbers or capability, it can take the ‘cheap shots’ off the table in a crisis and it can complicate the decision-making of adversaries.

For Washington, even a limited missile defense can better assure allies and partners, as well as Americans, that they’re not hostage to every missile-equipped rogue. And it can make the U.S. more willing to deploy its principal conventional weapons—such as aircraft carriers—in harm’s way (although probably only where threat capabilities and numbers are limited).

For Australia today, the strongest argument for committing to greater efforts in the BMD field lies in our possible alliance role in the broader western Pacific. The U.S. is grappling with the problems posed by a growing Chinese anti-access capability that includes ballistic missiles, and it makes sense for us to be aware of our ally’s priorities. But that doesn’t mean a big investment is required in this specialist area. Other parts of the ADF force structure (not least, submarines) also represent valuable alliance contributions, and a sizeable expenditure on BMD would have opportunity costs for the ADF and for the US as well.

With a continued modest investment in BMD research and development efforts, and a watchful eye on defensive technologies as they mature, Australia will be well placed to adopt them in the future, should externalities make that desirable.

Andrew Davies is senior analyst for defense capability and director of research at ASPI. Rod Lyon is a fellow at ASPI and executive editor of The Strategist. The following article first appeared in ASPI’s The Strategist here.