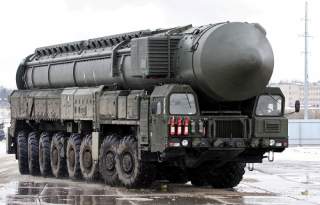 Since 2013, when rumors first began to circulate in the U.S. media that Russia might have violated the Intermediate-range Nuclear Forces (INF) Treaty, analysts have been trying to clarify the nature of the breach and identify the particular missile system involved. To date this has proved an exercise as difficult as the fabled hunting of the snark. Over two years later, and notwithstanding two formal ‘findings’ by the US in its annual compliance reports that Russia is in violation of the treaty, both arms control specialists and the broader public remain mystified about what is supposed to have happened. In this post, I want to explore what we know. And let me warn readers in advance that we don’t know much.

Early reports seemed to suggest that the Russians were working on a new intermediate-range ballistic missile, which they had—apparently—cunningly disguised as an intercontinental ballistic missile. In reality, that was never much of a claim. ICBMs are already caught and limited by the START treaty. And as Stephen Pifer of Brookings noted back in July 2013, it’s not a violation of the INF treaty for a signatory to test a strategic-range ballistic missile system at a shorter range: weapons are defined by their maximum range. Still, the story grew that Russia was violating the INF treaty through its development and testing of the RS-26 ballistic missile.

In late January 2014, that story was overtaken by a second: Michael Gordon reported in the New York Times that concern centered upon the testing of a new ground-launched cruise missile and that earlier speculation about an ICBM flown to shorter-range had caused analysts to fixate upon the wrong system. The hunt began anew—for a Russian cruise missile system that might fit the bill. Towards the end of April 2014, Jeffrey Lewis produced a column in Foreign Policy that examined the possibility Russia might be in violation of the INF treaty either through its RS-26 ‘intermediate-range ICBM’ (to use Lewis’ phraseology) or through its R500, a cruise missile devised for the Iskander weapon system. Part of the problem, Lewis observed, lay in trying to define the range of a missile that could easily use a quarter of its flight-time zigzagging from side to side.

On July 29, 2014, the U.S. State Department noted publicly in its annual report on arms control compliance that the U.S. believed Russia was in violation of the INF treaty, specifically the provisions prohibiting possession, production or flight-testing of a ground-launched cruise missile with a range capability of 500-5,500 kilometers, or the possession or production of launchers of such missiles.

On July 30, 2014, in a piece for the Federation of American Scientists, Hans Kristensen covered the finding, pondering why it had taken so long to call as a violation a system first tested in 2007. He believed the culprit was the R500 cruise missile. An analysis for CSIS in October 2014 by Paul Schwartz identified the concerns about the RS-26, but focused primarily upon the R500 as the weapon most likely to be behind the violation.

The State Department’s 2015 annual report on compliance, issued on June 5, noted that Russia continued to be in violation of the INF treaty. The report included a rather dry section on compliance analysis which seemed to imply that the violation related to flight-testing of a cruise missile from a land-based launcher that was not ‘fixed’, ‘used solely for test purposes’ and ‘distinguishable’ from GLCM launchers. A piece by Pavel Podvig published in the Bulletin of Atomic Scientists on June 22, 2015 started to home in on the possibility of a flight-test violation in relation to a cruise missile typically not deployed in a land-based mode. Podvig believed a long-range submarine-launched cruise missile had been tested without due regard to launcher type.

Subsequently, on June 23, Rose Gottemoeller’s Interfax interview carried a few more clues. The U.S. had been discussing this issue with Russia since May 2013, she said. Asked for specifics about the alleged violation, Gottemoeller said the R500 was not the missile involved. Nor was the RS-26. She said at issue was a ground-launched cruise missile with a range of 500-5,500Km and the U.S. government was confident that Russia knew which missile was meant.

Gottemoeller’s interview has not entirely stopped analysts from arguing the case against the RS-26 and R500—see here and here for examples. But on July 1, 2015, following the Gottemoeller interview, a blogger on the Nuclear Diner rehearsed the Podvig logic as now offering the most plausible case. Jeffrey Lewis at Arms Control Wonk seems to be headed down a similar track, posting a piece by Nikolai Sokov on Russian cruise missiles. Sokov believed that the allegation centered upon a land-based test of a sea-launched cruise missile, the SS-N-30A, known as the Kalibr.

While some might wonder about the utility of the INF treaty—given it doesn’t constrain sea-launched or air-launched intermediate-range missiles—the compliance of signatories is an important issue in its own right. In retrospect, the case against Russia has been blurred by Washington’s unwillingness to provide greater initial detail of the alleged violation. Even now, it’s not clear what actually occurred. We might finally be gaining a better understanding of the problem. But arms control shouldn’t be a guessing game.

Rod Lyon is a senior fellow at ASPI (where this first appeared) and an adjunct senior research fellow at the Griffith Asia Institute.