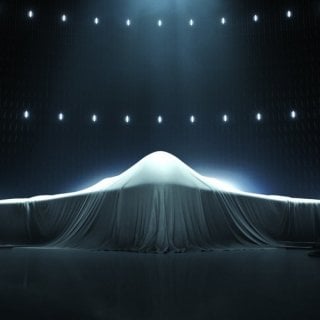 So Boeing, on behalf of its teaming arrangement with Lockheed Martin, has protested.

Late last month, the US Air Force chose Northrop Grumman to develop and build its hoped-for Long-Range Strike-Bomber (LRS-B), and the losing bidder is naturally unhappy. Two friends at the defense conference I attended last weekend expressed alternate but emotional reactions: well of course they protested said the writer; geez I was hoping they wouldn’t said the consultant. I wasn’t calling the odds, figuring that the nuances of corporate strategy and the degree of corporate indignation were unknowable. But that’s the problem with this episode of the drama—the unknowable knows inherent in this program are nearly inscrutable, but the policy implications of yet another protest are more clear.

The filing was extensively covered. Courtney Albon of Inside Defense did call Boeing's complaint “an unusually detailed statement on its decision to protest.” The simple brief on Boeing's website decried the decision process as “fundamentally flawed.” The company is certainly trying to evoke sympathy with its corporate ambitions for better public policy. “The cost evaluation,” its lawyers claimed, “did not properly reward the contractors’ proposals to break the upward-spiraling historical cost curves of defense acquisitions.” Loren Thompson, advisor to senior management at both Boeing and Lockheed, immediately covered the issue for Forbes to further explain their intent. In Defense News, Andrew Clevenger and Lara Seligman cited him as asserting that “the Boeing/Lockheed team bid $11 billion for engineering and manufacturing development (EMD), but the Air Force calculated EMD at $21.4 billion.”

How such a gap? In National Defense, Stew Magnuson wrote how Boeing complained that “the Air Force over-relied on historical data to make its decision, and ignored recent advances that Lockheed Martin has made in manufacturing processes with the F-35 program.” In the Wall Street Journal, Doug Cameron cited an unnamed source that relying on historicals rather than the contractors’ estimates “doesn’t seem to make any sense.” But is the best basis for estimating future costs really such a knowable know? Should the USAF take contractors’ word when bidding for a cost-plus contract? Should they not thoroughly check them against experience? Perhaps the Air Force also considered how Lockheed has performed on the F-35 program—at least up until those “recent advances”. That two-decade mess is also substantially the government’s fault, but even so, the JSF might not have been the best example to cite. Perhaps the service considered how well Boeing has performed recently on the KC-46A tanker program. If the company can have such trouble developing a flying gas station from a commercial airliner that first flew in 1982, then maybe the whole stealth bomber thing could be a stretch.

To be fair, defense contractors are easy targets for defense analysts like me. Building stealthy attack thingies is hard work, and has been for a long time. Back in 1994, I helped the Air Force Department analyze some details around the AGM-137 Tri-Service Standoff Attack Missile (TSSAM). Development contractor Northrop was having such trouble that by the end of the year, Deputy Defense Secretary John Deutch had terminated the program. The next year, the Pentagon’s acquisition secretariat initiated the Joint Air-to-Surface Standoff Missile (JASSM) program as a partial replacement. Lockheed bid its AGM-158 design, and McDonnell Douglas—soon to be bought by Boeing—bid its AGM-159. In 1998, the USAF chose the former, but over the next ten years, production quality problems troubled the winner. By 2009, these were mostly resolved, and the USAF has since bought thousands. The extended range version (the JASSM-ER) is now even the basis for the forthcoming Long-Range Anti-Ship Missile (LRASM), which the Navy will hang from those Boeing F-18 strike fighters that it loves so much.

AGM-137, AGM-158. TSSAM, JASSM, LRASM. Northrop, Boeing, Lockheed. Similar numbers, similar names, similar purposes, repeated problems, same contractors—all now arguing over whether two of them should get a do-over. Historically, those mulligans have been granted by the GAO at a rate of about 2 percent; this time, Byron Callan puts the odds at maybe 15 percent. Again, I have no idea, but this time, I argue that the unknowns are even less knowable. This time, the losers are protesting something that’s classified. The USAF won’t even release the amount of the winning bid, as the figure could “provide a window into the development being undertaken by the contractor.” If they’re keeping even the price from preying eyes, how much the rest of us can ever know is pretty questionable.

All the same, the leadership of the Air Force must realize the importance of knowing those future costs—to the extent that they’re at all knowable. The Congress was already experiencing serious sticker shock before the topline estimate became real. In the 2020s, the LRS-B program will absolutely compete with the JSF program for funding. In future wars, T.X. Hammes recently wrote, quantity may trump quality—so if there’s going to be an LRS-B at all, it had better be affordable. The USAF has already told the Congress that it may want well more than 100 aircraft. For the Big War in the Western Pacific, David Deptula of the Mitchell Institute (“Beyond the Bomber”) and John Stillion of the CSBA (“Trends in Air-to-Air Combat”) are talking about the potential multi-functionality of the big bomber. With added missions, though, usually come added costs.

Whatever those costs and the military need, the protestors are now asking the Government Accountability Office to substitute its judgment for that of the Air Force. For preventing fraud, corruption, or cronyism, I can agree that an appeals mechanism is a valuable public institution. But that’s not the argument here. How the GAO has the clairvoyance to assess, better than the USAF, “proposals to break the upward-spiraling historical cost curves” I cannot imagine. How the GAO would judge, with greater validity than the USAF,whether to consider those proposals with greater weight than historicals I also cannot imagine. At the end of the source selection process—stretched out for months while the USAF checked and rechecked the grading of the papers—some of the decisions had to be judgment calls. It’s understandable that Boeing protested. Unfortunately, at the end of day, we may mostly know that we’ve just lost 100 days.