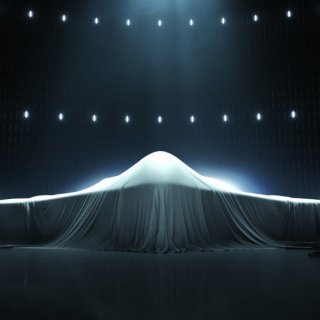 As Lara Seligman wrote in Defense News overnight, there’s a lot “we still don’t know” about the LRS-B, and as development moves forward, there’s a lot we still won’t know. Northrop’s just-up website features not even the shrouded plane of its Super Bowl advertisement, but just a zoomie with a buzzcut and aviator sunglasses. On his earnings call with investors, CEO Wes Bush said that the company was "ready to get to work,” but that he wouldn’t even be taking questions about the bomber. The Air Force has provided third-party estimates for the development and production costs, but not Northrop Grumman’s actual bids.

So what do we know about the money, and how much confidence can we have in the figures?

The USAF and industry together now have several decades of experience with designing, building, and buying stealth aircraft, but the economics of buying any complex weapons remain the same.

The Air Force has believed for some time that the LRS-B is “on a budget,” but even the advertised size of that budget was recently unclear. In August, after a “regrettable error,” the Air Force’s ten-year cost estimate for the program required revision from $33.1 billion, up to $58.2 billion, and then back down to $41.7 billion. Air Force Secretary Deborah James said that the blunder “won’t affect us internally,” but for a time, it clearly affected the Air Force externally. Todd Harrison of CSIS said that the disclosure "does not inspire a lot of confidence.” Congresswoman Jackie Speier of California called the discrepancy “massive.” Senators McCain and Reed of the Armed Services Committee similarly demanded answers. Congressman Forbes of the House Armed Services Committee promised verbal crossfire from his chamber. The mistake, however, was deemed to be a clerical error that originated outside the program office, with the staff responsible for submitting a required (if little-known) report under Section 1043 of the 2012 National Defense Authorization Act.

With Tuesday’s contract announcement, we do have some broad figures. The Air Force is now proposing to pay about $23.5 billion for Northrop to develop the LRS-B. Time will tell if the service can stay under this proposed price, but history seems not on the Air Force’s side. The past seventy years of combat aircraft development have included numerous cost overruns. Development of Northrop’s B-2A began in 1981, for example, lasted into the 1990s, and cost some $25.3 billion—over $38 billion in today’s terms. In fairness, the cost would have been much less had the USAF not insisted halfway through development that the plane would fly not just high-altitude, but also low-altitude missions. This necessitated a thorough redesign—after an initial prototype had already been built—to add the B-2’s characteristic “beaver tail” for better maneuverability, and an entirely new low-altitude testing program—held entirely at night over remote stretches of desert.

The average cost of procurement was also an artifact of a truncated program, which piled that development bill onto just 20 initial aircraft. According to the Government Accountability Office, the flyaway cost of each B-2A averaged $737 million, or $1.1 billion in today’s terms. Including the initial spares and software support brought the price to $929 million per aircraft, or $1.4 billion today. In 1995, Northrop offered to sell another 20 to the USAF at just $556 million each, though that figure in 2015 would still amount to almost $900 million. That’s a lot less than than the price of the first twenty, but still a lot more than today’s cost estimate for an LRS-B.

Up through 2008, the procurement process for the F-35 also experienced alarming cost increases, and while the final bill for development of the three variants is not yet due, it has already exceeded $55 billion. Could this time really be different? Perhaps. First, aircraft development and manufacturing processes have advanced considerably, and several companies have learned their lessons both technically and organizationally. Over the past twenty years, Lockheed Martin and its subcontractors have built hundreds of stealthy F-22s and F-35s, and twenty or so stealthy RQ-170s. In Forbes yesterday, Loren Thompson noted that a company that had “largely ceased building aircraft” had won this gig. But Northrop Grumman is one of those first-tier subcontractors, making large portions of the F-35 today, and at the same plant in Palmdale as it proposes for building the LRS-B. The company has learned valuable lessons from that work, and from its own prime contracting work on the RQ-180. Second, those manufacturing processes are well-understood, so we might have some faith that the twin independent costs estimates are based on recent experience curves. Third, if the bomber is much smaller than the B-2A, as has been rumored, a smaller price tag may be feasible. Less expensive materials, lest cost.

Finally, even if the bomber is not just a bomber, we would like to think that the Air Force has both the foresight and the institutional discipline—this time—not to thoroughly revise the requirements halfway through the development process. But we should not be too enthused. As Australian economists Henry Ergas and Flavio Menezes wrote a decade ago in the journal Agenda”

“As circumstances will inevitably change... including during the time of initial development, weapons systems are exposed to substantial risk of obsolescence, that is, of loss in value (in terms of their ability to accomplish their military mission) due to the appearance of superior alternatives. Almost inevitably, responding to obsolescence involves allowing some degree of system redesign during development. It also involves providing scope for refurbishment or modification during the system's operating life. The response to obsolescence therefore increases the extent to which weapons systems are evolving products that cannot be well specified in advance.” (See "The Economics of Buying Complex Weapons," vol. 11, no. 3, 2004, p. 249.)

There’s a reason, after all, that the development contract is a cost-reimbursable arrangement (and we’ll discuss contracting next). We just cannot know what threatening advances in air defenses Chinese or Russian firms might devise in the decade. Northrop has signed up for a fixed-price deal for production, but that only covers the first 21 aircraft in low-rate initial production. Once out of LRIP, the USAF may want to renegotiate the price, if its contractor performs better than expected. But Northrop may need to renegotiate the price, if new requirements require revisions in the design. So we will have some confidence in the cost estimates, but only as a starting point.

James Hasík is a senior fellow and Rachel Rizzo is a researcher at the Brent Scowcroft Center on International Security, where this piece first appeared.