The Greatest Threat Today To U.S. Air Superiority May Be The Pilots’ Oxygen System 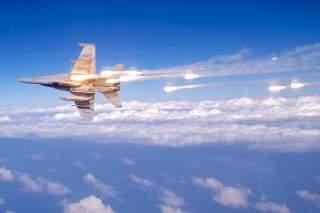 In war, dominance of the air confers almost incalculable advantages on the side that achieves it. The ability of the U.S. military to exploit the air domain has been a signature feature of the so-called Western Way of War for almost three-quarters of a century.

But America’s hard-won ability to dominate the third dimension is being challenged as never before. Our adversaries have long realized that the key to deterring or defeating the U.S. and its allies is to deny air superiority. The massive investments in so-called anti-access and area denial capabilities, particularly by Russia and China, is a testament to how much they fear U.S. air power.

These countries are deploying an integrated array of sophisticated, high-performance, advanced, longer range surface-to-air missiles, new fighters and electronic warfare systems designed to kill U.S. aircraft. According to a recently released Air Force study, “The Air Force’s projected force structure in 2030 is not capable of fighting and winning against this array of potential adversary capabilities.”

But today the greatest threat to U.S. air superiority may be something entirely different and, until recently, almost unrecognized by the military. This is the danger of hypoxia, a deprivation of adequate oxygen for the human body to function. Hypoxia can cause dizziness, disorientation, decreased mental functions, a slowing of reflexes, heart palpitations and, in very severe cases, death.

Lack of oxygen can be particularly insidious because its effects can occur over time, overwhelming pilots before they are aware that something is amiss. Clearly, anything that interferes with a pilot’s performance, particularly in combat, could be devastating not only to that individual but to the mission and even the campaign.

U.S. pilots have been experiencing an epidemic of reported cases of inadequate oxygen/hypoxia. These problems are not related to a loss of cabin pressure or any other mechanical problem with the aircraft. This is not restricted to a single type of airplane or a single service. Pilots have reported oxygen problems with the F/A-18, EA-18G, F-35 and T-45 Navy trainer.

The Navy and Air Force have temporarily grounded squadrons, wings and, in the case of the T-45, the entire fleet, in order to determine the source of the problem. It was reported that at one point more than 100 Navy T-45 instructor pilots refused to fly the aircraft due to concerns about the plane’s oxygen problems. The loss of any of these fleets because of a problem with oxygen supplies could be more damaging to national security than any adversary anti-aircraft system.

It is believed that the source of the problem is with the environmental control system, which ensures adequate cabin pressurization and, in particular, the on-board oxygen generation (OBOG) system that supplies oxygen directly to the pilot. The OBOG system draws air from the aircraft engine, filters it, concentrates and stores the oxygen which is then provided as needed to the pilot. An oxygen monitor watches both the performance of the OBOG, records critical flight data and provides a low oxygen warning to the pilot. Most U.S. fighter aircraft are now equipped with OBOG systems of various types. The OBOG system eliminates the requirement to provide the pilot with sufficient stored oxygen for the entire mission. However, there is always an emergency backup oxygen tank.

The Air Force and Navy have conducted nearly two years of intensive investigations to determine the reason for the problem. Mountains of data have been collected from the oxygen monitoring systems as well as from other aircraft sensors. A variety of changes to the OBOG systems have been tried. Yet, these efforts have failed so far to identify a root cause.

A new approach may provide the answer that has so far eluded engineers and scientists. At the U.S. Government’s direction, the British aerospace and defense company Cobham is focusing on the pilots themselves rather than the mechanical or electric components of the OBOG.

Cobham has developed a set of specialized sensors to monitor pilot breathing and the cockpit environment. An inhalation sensor records data on the oxygen supply just prior to it being ingested by the pilot. A companion exhalation sensor monitors the pilot’s physiology, measuring exhaled oxygen concentration, levels of carbon dioxide and overall flow. For the first time, it is possible to gather physiological data related to the aircraft’s oxygen system and correlate that with information provided by the oxygen monitor and other onboard sensors.

Cobham envisions a three-phase program to deal with the problem of oxygen deprivation/hypoxia. The first phase is to equip a number of aircraft with the new sensors and collect data on pilot physiology and the human-OBOG interactions.

The second phase will use the data to develop a real-time data analysis and alert system that would warn of a problem based either on the OBOG’s performance or the pilot’s own physiological behavior. The pilot would be warned to take corrective action which today would mean turning on the emergency oxygen supply. In the near future, this could involve an electronic breathing regulator that would automatically respond to data from the inhalation and exhalation sensors.

In the third and finally stage, Cobham technologies would support the development of a next-generation life support system. This would employ predictive algorithms to initiate a response to an oxygen imbalance even before the pilot experiences any ill effects.

I am reminded of the old rhyme, attributed to Benjamin Franklin that begins “for want of a nail the horseshoe was lost” and ends with “the kingdom was lost, all for the want of a nail.” The new Cobham sensors may prevent a future in which for want of oxygen not only was the pilot lost but so too was U.S. air superiority.