The Inside Story of How America, France and Great Britain Attacked Syria 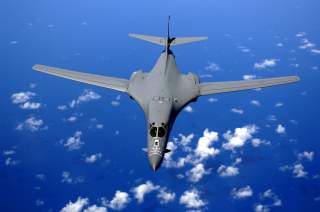 The Pentagon has provided a detailed breakdown of exactly how the United States and its allies, France and Britain, struck at Syrian regime targets on April 13. As expected, the allied powers used cruise missiles to strike at the regime, both to minimize the danger to aircrews and as a precaution in case Russian air defenses attempted to intercept the attack.

“The United States, the United Kingdom and France, three of the five permanent members of the U.N. Security Council, conducted a proportional, precision, coordinated strike in response to the Syrian regime's continued use of chemical weapons,” Joint Staff Director Lt. Gen. Kenneth F. McKenzie Jr. told reporters at the Pentagon on the morning of April 14. “This combined military strike was directed against three distinct Syrian chemical weapons program targets.”

The allied forces struck at three targets in Syria. “Against the first target, the Barzeh Research and Development Center, which is located in the greater Damascus area, we employed 76 missiles,” McKenzie said. “57 of these were Tomahawk land attack cruise missiles, and 19 were joint air-to-surface standoff missiles, or JASSMs.”

The target seems to have been destroyed. “Initial assessments are that this target was destroyed,” McKenzie said. “This is going to set the Syrian chemical weapons program back for years. We also note that we've successfully destroyed three buildings in metropolitan Damascus, one of the most heavily defended airspace areas in the world.”

U.S. air and naval forces carried out the American portion of the strike, marking the operational debut of Lockheed Martin’s stealthy AGM-158B Joint Air-to-Surface Standoff Missile-Extended Range (JASSM-ER). A pair of U.S. Air Force B-1B Lancer strategic bombers—escorted by fighters and U.S. Marine Corps. Grumman EA-6B Prowler electronic attack aircraft—launched 19 of the new air-launched cruise missiles. However, the bulk of the strike came from the sea, with the U.S. Navy’s Ticonderoga-class cruisers, Arleigh Burke-class destroyers and a Virginia-class attack submarine delivering the brunt of the attack.

France, meanwhile, used a combination of naval and airpower to strike at Syria. “In the Eastern Mediterranean the French frigate Languedoc fired three missiles of their naval version of the SCALP missile,” McKenzie said. Additionally, “our French allies flew a combination of Rafales and Mirages, and launched nine SCALP missiles,” he added.

The British Royal Air Force also contributed air assets in the form of Typhoon multirole fighters and Tornado bombers that fired the Storm Shadow—which is the British name for the SCALP—cruise missile against Syrian targets. “Our British allies flew a combination of Tornadoes and Typhoons, and launched eight Storm Shadow missiles,” McKenzie said.

Syrian air defenses were totally ineffective against the incoming attack. “None of our aircraft or missiles involved in this operation were successfully engaged by Syrian air defenses, and we have no indication that Russian air-defense systems were employed,” McKenzie said. “We are confident that all of our missiles reached their targets. At the end of the strike mission, all our aircraft safely returned to their bases.”

In fact, the Pentagon says that the Syrians only launched missiles—without guidance—after the incoming strike had already hit. “We assessed that over 40 surface-to-air missiles were employed by the Syrian regime,” McKenzie said. “Most of these launches occurred after the last impact of our strike was over. It is likely that the regime shot many of these missiles on a ballistic trajectory. I mean, by that, without guidance. And we assess that the defensive efforts of Syria were largely ineffective, and clearly increased risk to their people based on this indiscriminate response. When you shoot iron into the air without guidance, it's going to come down somewhere.”

Indeed, only the U.S. Navy’s Naval Integrated Fire Control – Counter Air (NIFC-CA)—which relies on the Northrop Grumman E-2D Advanced Hawkeye aircraft to provide airborne target cuing—can claim to provide some manner of area coverage against cruise missiles in a maritime environment. It is very doubtful that even NIFC-CA would provide good protection against cruise missiles over land where terrain masking poses a serious problem.

Speaking of Russian air defenses, the Kremlin’s forces stayed out of the fray and did not attempt to engage the incoming missiles. However, even then, the Pentagon carefully avoided Russian forces, and thus Moscow’s forces were out of position to help their Syrian allies even if the Kremlin had been inclined to do so. “I didn't say the Russian air defenses were not turned on. I said they weren't employed,” McKenzie said.

Thus far, the Russian response to the attack on Syria has been limited to rhetoric for the most part. However, the Russians had stated they would only respond with force if allied forces directly struck them. However, the allies—particularly France—took pains to avoid escalation. “We refuse any possibility of military escalation,” French Defense Minister Florence Parly said. "We had ensured that the Russians were warned beforehand."

Meanwhile, Moscow has started a propaganda offensive against the United States in response to the attack on Syria. “The Russian disinformation campaign has already begun,” Pentagon Chief Spokesperson Dana W. White told reporters. “There has been a 2,000 percent increase in Russian trolls in the last 24 hours. Therefore, we will keep you all abreast of the facts moving forward.”