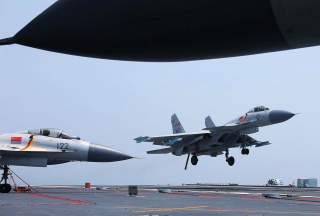 China’s six-year-old carrier-aviation branch has been having an eventful couple of months: the People’s Liberation Army Navy’s (PLAN) second operational aircraft carrier, and first domestically built one, completed sea trials on May 22. Reportedly, it will have the space for a larger air wing of thirty-six J-15 jet fighters, though only ten were visible on deck during the launch ceremony. (Its predecessor, the Liaoning, could carry twenty-six.)

The Shenyang J-15 Fēishā (“Flying Shark”) multirole fighter jet entered service in 2015 and was immediately compared to U.S. Navy’s two-seat FA-18 Super Hornet fighter. In truth, it is very much derived from the single-seat Russian Su-27 Flanker fighter, a large but highly agile twin-engine jet comparable to the F-15 Eagle.

In the 1990s, China arranged to license-build domestic copies of the Su-27, called the Shenyang J-11. Beijing ended up backing out of the contract half way through and began building a more advanced J-11B version of their own with dodgy indigenous WS-10 turbofan engines. The Russians were not pleased when they found out.

At the same time, officers in the Chinese military plotted to acquire the two-thirds constructed Soviet-era aircraft carrier Varyag, which was rusting in a Ukrainian shipyard, available for only $20 million—far cheaper than a single modern jet fighter. Through a bizarre chain of events—involving an enterprising basketball star, vodka-fueled backroom deals in Ukraine, and an unplanned 500-day hiatus off of Istanbul—the carrier was brought back to China, along with the blueprints used to construct it.

But China also needed jets that could fly off the carrier. For years, Beijing did its best to purchase Su-33s, a carrier-based version of the Su-27, from Russia. But after Russia realized China was creating Flanker rip-offs, it refused to deal.

However, the PLAN was able to make do with another useful trinket it picked up in Ukraine—a Soviet-era Su-33 prototype, the T-10K-3. China purchased it in 2001 and the Shenyang Aircraft Corporation (aka Institute 601) quickly set about reverse-engineering it.

J-15 prototype Number 551 was flying by 2009, and the following year it was tested taking off from a simulated carrier deck. The J-15 retained the Su-33’s folding wings for more efficient stowage in a carrier deck, and tailhook and strengthened landing gear for carrier-landing. However, it uses a higher proportion of composite materials than the Su-33 to save weight, and has a lower landing speed of 150 miles per hour (compared to 168) to make carrier landing easier. It was also outfitted to be more versatile multirole platform than the air-superiority oriented Su-33.

Meanwhile, the PLAN extensively refitted the Varyag cruiser-carrier into the Liaoning, a Type 001 carrier lacking the heavy missile armament but capable of carrying additional aircraft. In 2012, a J-15 finally completed the first PLAN’s first take off and landing from a Chinese aircraft carrier.

The Chinese military has claimed that J-15 is superior to the U.S. Super Hornet, and in some narrow respects this is true. The J-15 is faster with a maximum speed of 1,300 miles per hour (or 800 at sea level) compared to 1,200 for the Super Hornet; has a maximum G-load of 8.5 compared to 7.5; possibly a bit higher-flying with a service ceiling of 55,000 ft compared to 50,000; and it may technically even have a longer range.

But these slim advantages are vastly outweighed by the fact that the Super Hornet employs a more advanced catapult-assisted takeoff system, while the J-15 must charge off the curved ski-jump style flight deck of a Type 001 carrier. Chinese WS-10 turbofans have proven extremely trouble-prone and required frequent factory-level maintenance, so the basic J-15s have remained powered by Russian AL-31F turbofans, though these don’t generate adequate thrust.

Even though a J-15 can theoretically lug up to 14,000 pounds of weapons, it must adhere to sharp weight restrictions to take off from a 200-meter long curved ramp—as low as only 3,000 pounds of weapons. That equates to just six unguided 500-pound bombs or two long-range anti-aircraft or anti-ship missiles. By comparison a fully combat loaded Super Hornet can carry 17,750 pounds on eleven hardpoints.

These shortcomings have not been lost on Chinese media—as early as, 2013 articles in the military press described the Flying Sharks as ‘flopping fish.’ More recently in 2018, the J-15 underwent another round of criticism for lacking the stealth capabilities of the U.S. Navy’s new F-35Cs. In a society in which negative media reports contradicting government boasts are usually swiftly suppressed, it is revealing that these criticisms were allowed to air.

In other respects, the J-15 does involve a significant modernization of the 80s-era Flanker. In addition, the J-15 has a modern ‘glass cockpit’ with hands-on-throttle-and stick controls transmitting commands through a fly-by-wire system, and a modern heads-up display. It also has an Infrared Search and Track System (IRST) and laser-range finder turret in front of the canopy which is useful for discretely stalking adversaries at short range and detecting stealth aircraft. (U.S. fighters mostly lack IRSTs). The airframe is also reportedly covered in radar-absorbent coating, though there’s little data on whether its radar cross section is much improved from the Flanker’s, and a Missile Approach Warning System absent from the Su-33.

In terms of payload, the J-15 is armed with a 30mm cannon and ten hardpoints which can carry long-range R-77 and PL-12 radar-guided missiles, as well as short-range High Off-Boresight (HOBS) PL-8 or 9 and R-73 heat-seeking missiles. (HOBS missiles are maneuverable enough that the launching aircraft doesn’t need to have its nose pointed at the target.) In addition to unguided bombs and rocket, a Flying Shark can carry a variety of Ying Ji (‘Eagle Strike’) anti-ship munitions, including the supersonic (Mach 3) YJ-91, the subsonic but longer range YJ-83K (range 125 miles), and anti-radar homing missiles to take out air defense radars. However, takeoff weight restrictions sharply curtail missile payloads.

The J-15 also has an in-flight refueling probe which could help it overcome range limitations, but Chinese carriers do not yet have a carrier-based refueling plane and would depend on land-based tankers. However, photos have emerged of J-15s with buddy-refueling pods, allowing one J-15 to top up another—a techniques which the U.S. Navy currently uses extensively to keep its Super Hornets aloft.

Exact production figures for the J-15 are unavailable. At least twenty-three production aircraft were built between 2009–2012, and a figure between thirty and forty is commonly cited today. In theory, the PLAN should require well over sixty J-15s today in order to fully outfit the air wings of both Chinese carriers, in addition to building additional aircraft for training, testing and replacement. However, a 2016 article in the Kanwa Defense Review claimed that only ten J-15s had been delivered between 2012–2015, suggesting Shenyang may be having difficulty meeting production quotas.

Additionally, in April 2016, two J-15s suffered fatal accidents while training to land on a simulated flight deck on land: the first on April 6 due to a “flight control system” malfunction; the pilot was seriously injured after ejecting at 300 meters. A second accident on April 27 occurred on a landing approach due to a failure in the fly-by-wire control system; the pilot did not survive ejection at low altitude. In 2017, a third J-15 piloted by a high-ranking Chinese officer ran into a flock of birds, causing his left engine to combust, but he managed to land.

China is nonetheless working on both improved J-15s and carriers. China’s third and fourth planned carriers will have flat flight decks and employ Catapult-Assisted Take Off and Barrier Assisted Recovery (CATOBAR), the same configuration as all but one U.S. carriers. The fifth and sixth are intended to be nuclear-powered carriers with electromagnetic catapults (EMALS).

In 2016 it was confirmed that China had been testing a J-15 on a 140-meter long land-based CATOBAR system. Catapult-launched J-15s would be much closer to achieving their full performance potential, and maxing out fuel and weapons loads, than those currently on the Liaoning and the new Type 001A carrier. A new prototype dubbed either the J-15A or J-15T was photographed featuring a strengthened landing-gear extender which would be useful for withstanding the force of a catapult launch. Testing of a ground-based catapult was confirmed in 2017. The new model may also be outfitted with a more powerful Chinese WS-10H turbofan, though the kinks are still reportedly being worked out of this engine as well.