The Jones Act is Needed Now More Than Ever 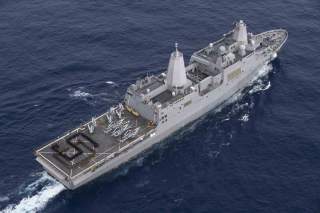 Almost one hundred years ago, the U.S. Congress sought to enhance the nation’s ability to provide and maintain a Navy by passing the Merchant Marine Act of 1920, also known as the Jones Act. At the time, the motivating concerns were economic security and maintaining a viable shipbuilding industry and merchant marine in support of a strong Navy.

The Jones Act places restrictions on what is called cabotage, the movement of goods between U.S. ports and on U.S. waterways. It mandates that only U.S. built and flagged vessels conduct this trade and that at least 75 percent of the crews of these ships be U.S. citizens. In addition, the Act restricts the foreign steel content of repair work on U.S. flag vessels, thereby restricting such activities to U.S. shipyards.

Periodically, attempts are made to modify or even repeal the Jones Act. The most basic criticism of the Act is that it subsidizes an inefficient domestic commercial shipbuilding industry and increases the costs of transporting goods between U.S. ports.

Another criticism is that the Jones Act impedes responses to natural disasters. However, the Act’s provisions can be waived in the event of a national emergency. The Bush Administration did so in response to Hurricane Katrina as did the Trump Administration during the recovery effort after Hurricane Maria.

The Jones Act’s goals are more important today than when it was promulgated. The United States is a global military power. Much of that power rests on the ability to reliably move equipment and supplies by sea from U.S. ports to distant parts of the world. The overwhelming majority of U.S. military equipment and supplies is moved by ship. U.S. merchant mariners moved 90 percent of the combat cargo and supplies used by the military in the Gulf war.

The maintenance of a fleet of U.S. flagged, active, commercially-viable, militarily-useful and privately-owned cargo vessels is vital to ensuring that the military can respond to any wartime need. In addition, the Jones Act helps to maintain a pool of U.S. merchant sailors who can be called upon to man government-owned sealift ships that are reactivated to support a wartime sealift effort.

The Jones Act is critical to the maintenance of a shipbuilding and repair industry and associated skilled workforce to support the U.S. Navy. The Act permits the Navy, which cannot acquire ships from foreign yards, to procure support ships such as tankers more cheaply by amortizing their costs across a larger production run that also includes commercial vessels. The repair and modernization of U.S. Navy vessels is dependent on the same workforce that performs similar work on commercial vessels. Without a flexible pool of skilled workers, the costs to the Navy of its repair and overhaul work would skyrocket.

There are some parts of the manufacturing sector such as computers, communications, electronics and vehicle engines, where the military must increasingly rely on the private sector. But even here, dependence on products from prospective adversaries such as China carries risks. However, there are other areas where the market is no longer free and the military is dependent on a small number of specialized producers. Shipbuilding is one of those areas where the government must maintain an arsenal of protected producers.

The evolving international security environment makes it all the more imperative to maintain the Jones Act. The current global trading environment must now be assessed through the lens of national security. Recently, the Trump Administration warned that imports of cheap foreign steel and aluminum threatened the viability of U.S. manufacturers of major military platforms. The Jones Act’s limits on the use of foreign steel in the repair of U.S. flagged ships helps to protect the national security industrial base.

It is not a given that the U.S. military will always have access to foreign flagged and crewed vessels. In a future high-end conflict, it is likely that both warships and logistics vessels will suffer battle damages. A viable domestic ship repair industry will be absolutely vital to sustaining global military operations in the event of war.

The Jones Act also is an important tool for homeland security, in particular by helping to secure the 25,000 miles of navigable inland waterways of the United States. It is particularly important that those vessels and crews that routinely travel between U.S. ports and especially the inland waterways through America’s heartland pose no threat to the homeland.

The departments of Defense and Homeland Security along with domestic law enforcement agencies at both the state and federal levels expend enormous amounts of manpower and resources to secure the nation’s ports and waterways. While foreign owned and operated ships routinely enter U.S. ports, their movements and those of their crews are subject to a variety of controls and restrictions. It makes no sense to add to the burden facing domestic security agencies by allowing foreign-owned ships operated by foreign crews to move freely throughout America’s inland lakes, rivers and waterways.

The requirement that all the officers and 75 percent of the crews engaged in cabotage be U.S. citizens goes a long way to reducing the risk that terrorists could get onboard or execute an attack on a U.S. target. In effect, there is a system of self-policing that reduces the burden on law enforcement and homeland security organizations. It is for this reason that the higher standards with respect to ownership and manning requirements for Jones Act ships are so significant.

There are costs associated with the provisions of the Jones Act. However, these must be weighed against the nation’s national security needs and the requirement to secure America’s waterways.