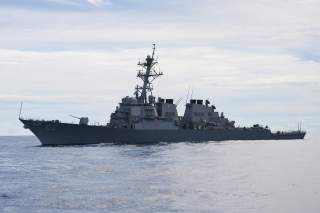 On June 17, the Arleigh Burke-class destroyer USS Fitzgerald (DDG 62) was involved in a collision with a Philippines-flagged cargo ship named ACX Crystal 56 nautical miles off the coast of Japan. The collision severely damaged the multibillion-dollar warship, killing seven members of her crew while injuring several others including her captain, Cmdr. Bryce Benson.

Indeed, the ship nearly sank during the incident.

“The damage was significant. This was not a small collision. It was right by the pilot’s house and there was a big puncture, a big gash, underneath the waterline also. Three compartments were severely damaged,” Vice Adm. Joseph Aucoin, commander of the 7th Fleet, said at a press conference.

The damage to Fitzgerald—though not directly applicable to combat—highlights the fact that modern warships are not quite as resilient as their heavily armored forbearers—such as World War II-era battleships, for example. Even relatively minor damage can render a modern warship incapable of combat operations.

“This is a mission kill on Fitzgerald that will require months and likely more than $100 million to repair,” Bryan Clark, a former naval officer and senior fellow at the Center for Strategic and Budgetary Assessments told The National Interest.

“To cause similar damage with a missile, you would need a large warhead that causes a lot of hull and fire damage or a torpedo that damages the ship below the waterline. A small ASCM [anti-ship cruise missile] may not cause a comparable level of damage as this collision.”

Seth Cropsey, director of the Center for American Seapower at the Hudson Institute, agreed that the lessons from the Fitzgerald incident might not be directly applicable to combat but modern ships are comparatively fragile.

“The applicability of lessons from the Fitzgerald collision to combat are not yet clear,” Cropsey told The National Interest.

“I suspect that they're less likely to point toward adding armor to the DDG-51 class than to examine seamanship more carefully.”

Nonetheless, there is a debate on the tradeoff between armor, speed and maneuverability.

“The DDG-51's defenses are designed to provide a layered defense against warheads.  They're not impervious.  The cost of heavier armor for the DDG-51—as it is for other combatants—is more weight, less maneuverability, and less speed.”

Layered defenses might help to forestall being hit, but once a missile or torpedo penetrates those measures, a modern warship is relatively fragile.

“I agree this shows how a modern warship is relatively easy to take out of action,” Clark said.

“That is not only a function of having less armor on today’s warships, however. It is also driven by improving threats and the number of fragile, interconnected sensors, computers, and weapons launchers distributed throughout the ship. For example, a DDG hit by a small ASCM that damages the aft VLS [vertical launch system] magazine and helo hangar would not necessarily take a DDG completely out of service, but the loss of weapons capacity and of aft-facing sensors like SLQ-32 may make the ship too vulnerable to operate in a contested environment. If a DDG were struck forward, as in this case, weapons and sensors would be even more likely to end up out of commission.”

Clark agreed that there is an argument to be made to adding armor to modern warships. However, there is a trade off, the ship would necessarily have to dedicate more space to carry armor—or it would have to be larger. In either case, added armor might impact the vessels’ stability and maneuverability.

“Adding more armor to ships would be helpful, but will add weight and could impact the ability to place sensors, weapons, and other mission systems where they are most effective,” Clark said.

“You don’t want armor to get in the way of sensors like radar, and countermeasures like EW [electronic warfare] systems, and of weapons launchers like VLS. Armor in the superstructure is especially problematic because it adds weight high in a ship, which can affect stability.”

Newer sensor technology and newer materials could potentially change the calculus for the Navy, however. New materials such as Gallium Nitride allow for smaller, more efficient radars while other materials such as Kevlar could afford ships more protection against kinetic impacts or explosives.

“As sensors and other mission systems get smaller and lighter, though, the Navy may be able to shift some of that superstructure and topside weight to armor,” Clark said.

“Also, new armor materials, like Kevlar, are available and being added to ships. For example, DDGs have some armor in the superstructure and along parts of the hull and the Navy is adding Kevlar and other armor to the LCS.”

While the Navy might consider such technologies for future vessels, retrofitting existing ships is probably not an option. The best defense for today’s Burke-class is its combination of sensors, speed and maneuverability.

“The DDG-51s' hull thickness is a quarter inch of steel.  Armor this isn't.  Weighting the ships down is unlikely to have made a difference in Tokyo Bay,” Cropsey said.

“Their best defense is their combat systems, their speed, and maneuverability.”