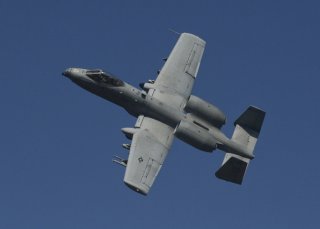 Despite what the Pentagon and senior Air Force leaders might say, the A-10 Warthog is far from a “single-purpose airplane.” But dropping nuclear bombs might be one of the things the low- and slow-flying attackers actually can’t do.

But the Air Force once briefly considered the idea.

In December 1975, Secretary of Defense Bill Clements wanted to know how much it would cost to modify F-15 and F-16 fighter jets so they could carry atomic weapons. Two months later, the Air Force sent back data on what it would take to upgrade those two types of aircraft—or the A-10—with nukes.

“For your information, we have also provided similar cost data on the A-10 aircraft,” states an unclassified memo War Is Boring obtained from the Air Force Historical Research Agency. “The estimated cost to make 275 A-10s nuclear-capable is $15.9 million.”

The total amount—equivalent to more than $65 million today—would cover developing and testing the required equipment, and installing it on the Warthog fleet.

The flying branch’s calculations included systems needed to support B-43, B-57 and B-61 bombs.

At the time, these three bombs were the standard nuclear weapons for aircraft in the U.S. military. If a shooting war broke out in Europe, America’s NATO allies would have gotten access to these weapons, too. Newer versions of the B-61 remain in service today.

Obviously, the Air Force never ended up arming the A-10s with nukes.

But Clement’s desire for more nuclear-armed aircraft is hardly surprising. During the Cold War, the Pentagon expected to use nuclear bombs, artillery shells and missiles to fend off a Soviet invasion of Europe.

“As new aircraft are coming online in the 1970s, their use as nuclear delivery aircraft would have been discussed,” Air Force historian Brian Laslie says. “Tactical delivery of nuclear weapons was surely to be in planning documents for a European theater conflict.”

For many in Washington, the devastating power of atomic arms was the only way to deter the Kremlin. On paper at least, Moscow and her Warsaw Pact allies had a terrifying advantage in sheer numbers of tanks and other armored vehicles.

“Since 1968 the USSR has built over 65,000 armored vehicles for maneuver—nearly four times as many tanks as the United States, some three times as many armored infantry carriers,” warned a recently declassified Central Intelligence Agency article published in 1980.

But why the Air Force would offer up a nuclear-armed A-10 as a potential solution isn’t entirely clear.

While the Warthogs boast an impressive and unequaled array of ground attack capabilities, the straight-winged strike planes are poorly suited at best—and a death trap at worst—for a nuclear bombing run.

“This is a ‘could versus should’ question,” says a senior Air Force weapons and tactics planner, who spoke to War Is Boring on the condition of anonymity. “Certainly, the A-10 could have been modified for nuke delivery.”

“However, the more to the point question is whether or not it should have,” adds the official, who is also a former Warthog pilot. “In my opinion, I can see practically no reason to do so.”

The problem is that while the aircraft certainly could have delivered the bombs to their intended targets, the pilots probably couldn’t make it back alive. The Warthog’s slow speed, so valuable when supporting troops on the ground, could have easily turned the entire affair into a suicide mission.

While the exact specifics are classified, a B-61 bomb can likely create a fireball almost a mile wide, according to data from nuclear historian Alex Wellerstein’s Nukemap Website.

The approximate radius of the air blast from the weapon going off—where “most residential buildings collapse, injuries are universal [and] fatalities are widespread”—would extend more than three miles from ground zero, Wellerstein’s site adds.

Fast-moving fighter jets would have trouble escaping the aftermath of these massive explosions. On a nuclear mission, the Air Force expected its fighter pilots to fly toward their targets at altitudes greater than 30,000 feet before lobbing bombs at the enemy.

With the bombs flying in an upward arc onto the target, the method would hopefully give the aircraft enough time to fly clear of the blast. But it’d still be a close call. The slower A-10s probably wouldn’t make it.

“The fact that F-15E Strike Eagles and other fighters would have had difficulty egressing [the area] after nuclear delivery indicates that any A-10 using nuclear weapons would not have survived,” Laslie says. “I just don’t think any nuclear delivery profile would have been sufficient for an A-10.”

The A-10 pilots would have had to hope for the best. But weapons fitted with a timed fuze might have bought just enough time for the Warthogs to get away from the impact site.

“Here’s one possibility … a last-ditch mission profile intended to blunt a Warsaw Pact breakthrough along the German border,” the Air Force officer suggests as one reason for sending the Warthogs on a nuclear mission.

Needless to say, the Air Force didn’t recommend strapping atomic weapons to the A-10s. Nor is there any record that the Air Force considered the idea ever again.

“I do not think I ever heard this capability discussed,” the former A-10 pilot says. “My guess is that we would have had a good laugh at the idea had it ever come up.”

The consensus appears to be that lobbing nuclear bombs is one thing the venerable Warthogs can’t—and shouldn’t—do.