The Lusitania Sinking: Why No American Declaration of War on Germany? 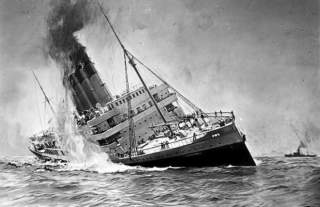 Asking “what if” is a popular parlor game. Seldom, however, do we ever get an answer, and certainly not almost immediately.King George V of Britain is a rare exception. On the morning of May 7, 1915 in the midst of discussing Germany with a visiting American envoy, Colonel Edward M. House, he asked, “Suppose they should sink the Lusitania, with American passengers on board?” Within hours he had his answer.

The day had turned out to be surprisingly beautiful off the coast of southern Ireland. The morning’s fog had lifted, replaced by bright sunshine. The passengers on board the RMS Lusitania, the fastest and most luxurious cruise ship on the seas, eagerly anticipated their impending arrival in Liverpool, just six days after departing New York. What they didn’t know as their ship sliced through the Irish Sea in the early afternoon, just a dozen miles off Old Head of Kinsale, was that a German submarine had spotted them, or that, the Lusitania’s captain, despite knowing of possible submarine activity in the area, ignored recommendations that he plot an evasive course. It was a fatal mistake. At 2:10 p.m., the submarine fired one of its two remaining torpedoes, scoring a direct hit. The “Greyhound of the Seas” sank in just eighteen minutes. Nearly 1,200 people died, including 128 Americans.

News of the Lusitania’s sinking shocked the American public, much as Pearl Harbor and September 11 would shock future generations. Unlike those two tragedies, however, the sinking of the Lusitania didn’t produce a national consensus in favor of war. True, staunch nationalists like former president Teddy Roosevelt, who thought that President Woodrow Wilson had erred eight months earlier in declaring the United States neutral in the war in Europe, denounced the attack as barbarous and demanded a confrontation with Germany. So did some newspapers. The day after the Lusitania’s sank, theNew York Herald ran a headline exclaiming, “WHAT A PITY THEODORE ROOSEVELT IS NOT PRESIDENT!”

But as horrified as most Americans were at the thought of civilians being attacked without warning and left to a cruel fate in the sea, they recoiled at the thought of war. Many Americans still saw Washington’s advice to stand apart from Europe and Jefferson’s warning against “entangling alliances” as gospel. Irish Americans had no interest in fighting to help Britain so long as it denied Ireland its independence. German Americans sympathized with their ancestral homeland. And still other Americans saw no virtue in either war or the squabbling European powers. When New York newspapers asked editors around the country how the United States should respond to the Lusitania’s sinking, only six out of the thousand who responded urged war.

Hawkish voices were more numerous in the Wilson administration. Wilson’s close confidante and in many ways his de facto secretary of state, Colonel House, spoke for many of Wilson’s other advisers when he counseled that “America has come to the parting of the ways, when she must determine whether she stands for civilized or uncivilized warfare. We can no longer remain neutral spectators.” But Wilson’s actual secretary of state, William Jennings Bryan, a pacifist who had hoped to convince countries to settle their disputes through binding arbitration, raged against the anti-Germany sentiment. Suspecting that the Lusitania carried munitions—it did— and noting that the German government hadplaced ads in New York newspapers warning Americans not to sail on the Lusitania, he wanted evenhanded treatment of Britain and Germany.

Wilson tried to steer a middle course. He hoped to satisfy what he saw as the public’s “double wish,” to stop future German attacks yet keep the United States at peace. He drafted the first in what turned out to be a series of stern diplomatic notes to Berlin. Even this was too much for Bryan. When Wilson decided in early June to write a second note to Berlin, he resigned in protest.

Unbeknownst to both Wilson and Bryan, Kaiser Wilhelm II had recognized the damage the attack on the Lusitania had done to Germany. Three days before Bryan resigned, he ordered German submarines to cease attacking cruise liners. But reluctant to take any action that suggested that the sinking of the Lusitania had been unjustified, Berlin kept the order secret. It wasn’t until September that Germany told Washington that its submarines would not launch unprovoked attacks on passenger ships. The policy remained in place until February 1917. Berlin’s decision to resume unrestricted submarine warfare placed it on a collision path with the United States. On April 6, 1917, Congress voted to declare war.

So King George got the answer to the question he posed to Colonel House. The sinking of the Lusitania would produce outrage and diplomatic protests. It would not, however, push the United States into war.