The M27: The Automatic Rifle That Will Make the U.S. Marines Even Deadlier 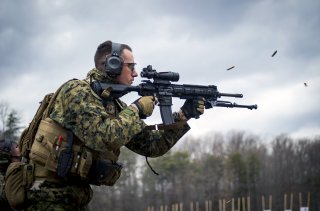 The 5.56mm M27 Infantry Automatic Rifle has remained a favorite rifle of the Marine Corps for the better part of this decade. Based on the Heckler & Koch HK416 assault rifle and adopted in 2011 to replace the M249 Squad Automatic Weapon, it’s widely considered more versatile and accurate over a longer range than the average weapon — so much so that the Corps has even discussed replacing every infantry Marine’s M4 carbine with an IAR variant in coming years.

Now, it seems the beloved M27 is getting a deadly update. The Corps is reportedly testing a specialized version of the IAR, the M38 Squad Designated Marksman Rifle, according to photos published by the Department of Defense. (Distinct from a sniper, who is typically trained to operate independently, the squad designated marksman moves with his infantry fireteam and fulfills its sharpshooting needs.) Adapting an M27 variant for that role could be a major step towards broader adoption across the Corps.

The new optics aren’t the only added muscle tacked onto these IARs. Each M38 appears to be decked out with a suppressor to cut muzzle noise. The Marines have already experimented with suppressing all the weapons in a deployed infantry company, so they know it can be done. But in an era where  Secretary of Defense (and mythologized former devil dog) James Mattis says more conventional troops will be doing more special-ops-style work, there are other interesting possibilities, too. Last June, the Corps carved out an “uber squad” in Camp Lejeune’s 1st Battalion, 6th Marines for a 18- to 20-month experiment with… suppressor-equipped M27s, as well as Ops-Core helmets typically reserved for U.S. special operations forces.

So is the Corps turning all Marine infantrymen into operators? Not exactly. But the Marines sure seem interested in giving more of them the flexible capabilities that a 17-year-old, broadening War on Terror so often demands.

“In Iraq, the daily routine of patrolling in dense urban areas demonstrated a need for fast, but precision rifle fire against fleeting targets,” Joseph Trevithick writes in The War Zone. “In Afghanistan, militants often initiated engagements beyond the effective range of standard infantry weapons, especially those without magnifying optics. Repurposing the M27 with a new scope is a relatively easy way to provide this type of capability.”

And don’t forget: It’s still, like, a squad machine gun, even if it doesn’t immediately look the part. Some of the first Marine automatic riflemen to receive M27s noted, for example, that the M27’s upper and lower receiver profile blend in nicely with everybody else’s M4s — so “if you come into contact, the enemy won’t know who the machine gunner is,” one satisfied grunt told Marine Corps Times back in 2012.

So maybe there’s a new corollary coming to the old maxim, “Every Marine is a rifleman”: With the M27/M38, it’s possible every rifleman is a machine-gunner and sniper, too.

The Marine Corps and Heckler & Koch did not immediately respond to request for additional information. We will update this story with new details as they become available.