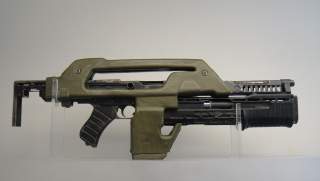 An iconic science-fiction firearm, the M41A pulse rifle is the standard-issue weapon of the Colonial Marines, the ill-fated, but unquestionably scary protagonists in James Cameron’s 1986 blockbuster: “Aliens.”

Because of its huge popularity — I mean come on, that thing is way more bada** than a blaster from “Star Wars” — a number gun aficionados and sci-fi fans have made their own versions of the combo-pulse rifle and grenade launcher over the years, and the videos are again making the rounds.

On June 2, BLK RFL DIV, dug up this video from 2014, showing a pulse rifle manufactured by Lage Manufacturing, LLC.

The pulse rifle from Lage weighs in at 14 pounds and is a combination 9mm submachine gun affixed to a short-barreled 12-gauge shotgun. It holds 50 rounds in a “coffin” magazine, and even has a LED counter on the side, so you can visibly watch your ammo deplete as you annihilate hordes of imaginary Xenomorphs at the range.

But, it’s hardly the only one out there, with the occasional hobbyist taking to YouTube to show off his own version of the mainstay of the Colonial Marines’ arsenal.

Like this one, made with an M1A1 Thompson and a Remington 12-gauge shotgun.

These custom-made pulse rifles are actually closer to the “real” thing than you might think. The original M41A pulse rifles used in “Aliens” were made from an M1A1 Thompson and fitted with a cut-down Remington 870 shotgun, with the heat shield and foregrip from a Franchi SPAS-12, plus a bit of rubber and plastic tossed in here and there.

If “Aliens” is less your style, but you still think the only good bug is a dead bug, don’t fret: Someone else has figured out how to make the Morita Assault rifle wielded by Johnny Rico.