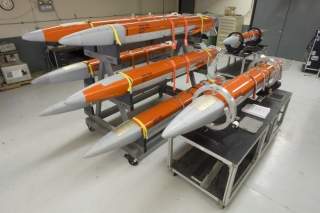 The key technology that underpins CODE is what DARPA calls “collaborative autonomy.” Essentially, the DARPA concept envisions a future where autonomous drones “could perform sophisticated tasks both individually and in teams under the supervision of a single human mission commander.” The drones would have to share data, decide on how to divvy up tasks, synchronize their actions and communicate with each other and their human commander—all by themselves.

“During Phase 1, we successfully demonstrated, in simulation, the potential value of collaborative autonomy among UASs at the tactical edge, and worked with our performers to draft transition plans for possible future operational systems,” said Jean-Charles Ledé, DARPA’s program manager for CODE. “Between the two teams, we have selected about 20 autonomous behaviors that would greatly increase the mission capabilities of our legacy UASs and enable them to perform complex missions in denied or contested environments in which communications, navigation, and other critical elements of the targeting chain are compromised. We have also made excellent progress in the human-system interface and open-architecture framework.”

The CODE program will use a modular open architecture artificial intelligence software which would allow multiple drones to independently fly to the their objective and then find, identify and kill their targets while adhering to the established rules of engagement. DARPA envisions the CODE-equipped drones to be sophisticated enough to call for backup or take other actions in case of emergencies or if some kind of unanticipated threat appears.

Especially appealing for the Pentagon is the fact that CODE-equipped drones would only need one human to command an entire swarm. The human commander can monitor the entire force using a Windows-like interface in real time. Typically, while drones are called “unmanned aircraft systems”—it’s a bit of a misnomer, each drone orbit can require up to 200 people to operate. It’s a problem that has pushed the Air Force nearly to the breaking point.

DARPA has already demonstrated the basic capabilities of the system under the CODE Phase 1 program. But during the current effort—Phase 2—DARPA hopes to demonstrate basic autonomous behaviors for the two drones—one from Lockheed and another from Raytheon—during a live flight test. Virtual unmanned aircraft would augment those two aircraft for the purposes of the test.

If Phase 2 proves to be successful, DARPA might move to Phase 3, which is much more complex. Under this phase, one team would be selected to test their CODE capability using up to six live vehicles cooperating among themselves—plus additional simulated vehicles. One person would have to command the entire swarm by themselves while performing a complex mission. That mission would—at a minimum—include target search, identification and engagement against an active and unpredictable adversary.

Additionally, DARPA is fully cognizant of the fact that Russian and Chinese electronic and cyber warfare capabilities could wreak havoc on U.S. forces if war ever broke out. As such, CODE is being designed to “be resilient to bandwidth limitations and communications disruptions, yet compatible with existing standards and capable of affordable retrofit into existing platforms.” If it works, CODE would massively increase the capabilities of future American unmanned combat aircraft while potentially reducing cost. But as with many of DARPA’s bleeding edge development effort—it’s a big IF.