This Is the Man Now Running Point On the Russia Investigation 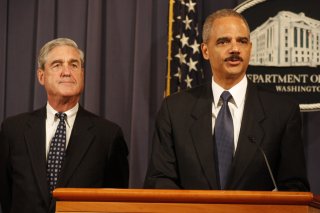 Mueller is a widely respected figure in Washington D.C. who has served in the administrations of Republican and Democratic presidents. He joined the Justice Department during the first Bush administration as an assistant to Attorney General Richard Thornburgh. In the following years, he became chief of the department’s criminal division, where he oversaw the prosecutions of deposed Panamanian strongman Manuel Noriega and mafia don John Gotti. President Bill Clinton appointed Mueller U.S. attorney for the Northern District of California in 1998.

He remained with DOJ until President George W. Bush appointed him director of the FBI, just one week before the Sept. 11 terrorist attacks. He would remain at the helm of the agency until 2013 — President Obama asked Mueller to stay on for a short time past the conclusion of his 10 year term.

After leaving government service, Mueller became a partner at WilmerHale. He will resign from the firm to avoid conflicts of interest, and his biographical page on the firm’s website was scrubbed within minutes of the announcement.

The former director forged a reputation as a turnaround man during his time atop the bureau. Congressional leaders savaged the FBI, among other agencies, for failing to stop the devastating attacks that left nearly 3,000 Americans dead on Sept. 11, 2011. Subsequent inquiries showed several FBI field offices each recovered intelligence relevant to the attack in advance of 9/11, but they failed to work cohesively and generate an actionable response.

Over a decade later, Mueller left a smarter, nimbler agency for his successors — a modern operation with streamlined intelligence sharing processes, increased accountability, and greater technical prowess. In addition to his professional accomplishments, longtime associates praise his personal style.

“Mueller is experienced, knowledgeable, and capable,” said David Kris, who worked with Mueller in his capacity as chief of the national security division at DOJ in the early years of the Obama administration. “He is utterly incorruptible. He cannot be intimidated. At this stage in his career, he has nothing to prove, no reputation to burnish, no axe to grind. He is ramrod straight in his integrity.”

“Bob was a fine U.S. attorney, a great FBI director and there’s no better person who could be asked to perform this function,” said California Sen. Dianne Feinstein, the ranking Democrat on the Senate Judiciary Committee. “He is respected, he is talented and he has the knowledge and ability to do the right thing.”

While all say Mueller is an extremely effective operator, they also claim he prefers to keep a low profile.

“[H]e is so careful to dodge the spotlight, so rigorously bland when caught onstage, that he could drink unrecognized at any bar in America,” a 2011 profile claimed.