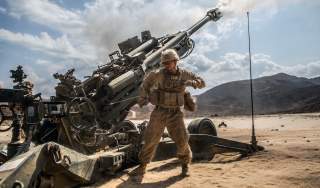 The Marine Forces Reserve can’t keep enough prior-service Marines to stay in to fill reserve billets for the first time in recent years, an unexpected recruiting failure that is rankling the service’s manpower bosses, Task & Purpose has learned.

Maj. Gen. Paul Kennedy, the commanding general for Marine Corps Recruiting Command, sent a letter to Lt. Gen. Michael A. Rocco, the deputy commandant for Manpower and Reserve Affairs at Headquarters, Marine Corps in Quantico, Va. last month asking to slash its prior service recruiting (PSR) goal down to 3,200 Marines from its original target of 3,655, according to several sources with knowledge of the correspondence.

In an email to Task & Purpose, MCRC spokesman Lt. Col. John Caldwell explained that while the command was on track to meet its target goals for new recruits, officials had identified a projected PSR shortfall due to “an imminent and uncharacteristically high” turnover rate of 46% among the command’s 81 PSR recruiters, well above what one senior military official described as a typical turnover rate of between 33% and 40%.

Though that official characterized the request for mission reduction as “not exactly national news,” Kennedy’s letter detailing the shortfall is reportedly making waves within Manpower and Reserve Affairs as a “cultural” rather than operational problem: Why don’t more Marines want to stick with the Corps?

“It’s a small story outside the building, but it’s a big story in it,” the official told Task & Purpose under the condition of anonymity because he was not authorized to comment on the topic. “Marine Corps Recruiting Command formally asking for a mission reduction is basically unheard of.”

So far, “the recommended solutions are in staffing and a final decision by M&RA has not been made,” Caldwell told Task & Purpose. But, he added, the service’s overall reserve retention rates “may allow for a mission reduction that will ensure Marine Reserve end-strength requirements are met for [fiscal year] 18.”

But in practical terms, the reduced prior-service recruiting quota would translate to fewer NCOs and officers in the Marine Forces Reserve. “The reserves are being used a lot these days for missions like security cooperations and UDP [Unit Deployment Program],” the senior military official said. “The reduced recruiting goal would cause staffing issues.”

Additionally, the missed recruiting goal will significantly impact the Marine Forces Reserve, whose overall troop strength numbers have hovered around 38,500 in recent years.

While other reserve forces across the Pentagon have been authorized to recruit more personnel into their ranks, the Marine Forces Reserve and the Coast Guard Reserve still have not been given any clearance to recruit beyond their fiscal year 2018 end strength.

James LaPorta is a journalist based in Jacksonville, North Carolina. His work has appeared in The Washington Post, The Daily Beast, The Military Times and Mic News among others. A veteran of the war in Afghanistan, James is a former U.S. Marine infantry squad leader and intelligence cell chief. Follow James LaPorta on Twitter @jimlaporta.