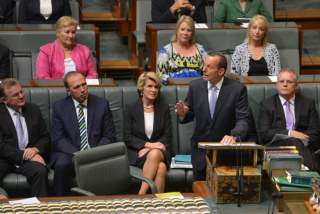 Generous commentators discern a wider strategy in Australia's mission to the MH17 crash site in eastern Ukraine - a heartening sign of the government's willingness to engage, hard-headed, with the world, wherever Australia's interests demand it.

Today, though, the Australian Federal Police's (AFP) Ukraine Operation is looking more and more like the charge of the light brigade: gallant, but not bright.

For the third day running, the AFP has failed to reach the crash site. The Federal Government has said they could wait for up to three weeks on the outskirts of Donetsk, in the middle of a civil war whose deeper geopolitical issues the Government has by its own admission little interest in.

This isn't the AFP's fault. But those who sent them there appear to have been misled about the conditions they would find.

In place of the ceasefire supposedly provided for by last week's Australian-sponsored Security Council Resolution 2166, the crash site is a battleground as the Ukrainian army attempts to drive a wedge between the rebels and the Russian border. (See, for instance, this New York Times report.)

Indeed, the AFP's Ukrainian hosts stand in breach of a cardinal provision of SC/2166, "that all military activities, including by armed groups, be immediately ceased in the immediate area surrounding the crash site to allow for security and safety of the international investigation."

This puts Australian Foreign Minister Julie Bishop, now back in Kiev, and Australia in an awkward situation. Ukrainian president Petro Poroshenko has every right to feel put upon by Australia's SC/2166: though welcome when it comes to the rebels, it's an obvious burden when it curtails the army's ability to suppress a rebellion on national territory. Certainly, it's a concession of sovereign rights it's hard to imagine any Australian government being prepared to make.

To fix the situation but in reality probably making it worse, Bishop wants Ukraine's parliament (which has not yet approved the Dutch-Australian mission) to approve the arming of the policemen Australia has deployed on its territory.

Yet the only thing worse than having unarmed personnel deployed in this particular warzone on the other side of the world is armed ones.

There are two simple reasons.

First, the Netherlands is a NATO country. Second, Australia is an American treaty ally.

Bishop will have to be very confident that both the Kremlin and the rebels will distinguish the inoffensive purposes of armed Australian personnel as clearly as we do.

That can't be taken for granted.

On Tuesday, the rebels accused the OSCE - the Organization for Security Cooperation in Europe, under whose auspices the mission has been arranged - of serving as a vehicle for American interests.

And from Russia's perspective, the whole point of this conflict is to stop the eastward expansion of Western-led organizations, such as NATO and the EU, which it perceives as a cover for spreading America's sphere of influence over the territories of the former Soviet Union.

Just a few months ago, this geopolitical contest was in earnest. With countries from the Baltic to the Black Seas facing the not implausible threat of Russian invasion, Europe was in the grip of its most serious great-power confrontation since the war-scare of 1983.

Such is the setting in which some are cheered to see the faces of Australian security and, possibly, defense personnel.

There's something of the spirit of 1914 in casting the AFP operation in Ukraine as a chance for Australia to prove, mainly to itself, that it matters on the world stage.

The counter view is that, as the Foreign Minister navigates the shoals of Ukrainian politics, Australia appears at sea in a place and conflict it doesn't understand or wish to - and which, its public statements seem to suggest, wouldn't concern it at all but for the tragic deaths of 38 Australian citizens and residents.

The Prime Minister, too, believes it possible to separate the humanitarian disaster of MH17 from the issue of "the geopolitics of Eastern Europe."

But freedom of maneuver in the space that such separation creates isn't an expectation we normally have when it comes to the unintended civilian victims of war - including the 800 or so civilians whom the United Nations has reported killed since mid-April by Ukrainian army shelling.

We know that our options for helping them are limited for a range of practical, political and military reasons.

Rather, it says a lot about the priorities of modern Australian foreign policy that the country should subordinate other relevant considerations to the exigencies of a consular case.

Of course, it's right for Australia to want to look after its own. But we mustn't exaggerate our ability to do so, whenever or wherever, just because, as Australians, we're fundamentally a good and democratic people with a right to a peaceful existence on earth.

International politics makes no such promises.

As Carl von Clausewitz timelessly observed, war, in eastern Ukraine as elsewhere, is the terrible, but not for that reason irrational, face of a political contest. When it comes to the crash site, it's one whose high stakes on the Ukrainian side as on the rebel don't easily permit of a truce - not even for the sake of a (grieving) third party that claims disinterest but can plausibly be presented as closer in sympathy to one side of the conflict than the other.

Rather than resolve, Canberra's lead-from-the-front attitude suggests a dangerous lack of respect for that political contest itself - and perhaps also for Australia's real strategic interests in it.

Similar complacency last year led the EU into a senseless confrontation with the Kremlin - and a patently high-risk gamble with the hopes and aspirations of the Ukrainian people: as Anatol Lieven, professor of war studies at King's College, London, has pointed out, because of its history, geography and the mixed sympathies of its people, Ukraine could never be asked to choose between Europe and Russia without tearing itself apart.

The West must bear part of the blame for the fact that it has. To the extent that it didn't raise with Brussels or Washington the risks involved, that might even include Australia.

This doesn't absolve the perpetrators of the attack on MH17 of their guilt for that crime. But it does mean that to work out a long-term strategy to guide our actions now, Australia, like other countries, needs to rely less on denouncing Putin and more on hard thinking about the country he leads. As Stephen Walt, professor of international relations at Harvard, has recently written:

Trying to understand what Russia or its separatist allies in Ukraine are doing does not require us to agree with their views or approve of their conduct, especially not now. But unless we make some effort to understand how Russia's leaders see the situation, and what their real motivations are, we are unlikely to formulate an effective policy to address the present crisis.

Those motivations are patently geopolitical and, ultimately, Australia's engagement - intellectual and diplomatic - with the crisis in Ukraine needs to move to that level too.

With the EU agreeing on a tougher regime of sanctions against the Kremlin, Australia probably has little choice but to jump aboard the Western bandwagon. But that doesn't mean Canberra should celebrate a breach in relations with Moscow.

On the contrary, a dispassionate assessment of Australia's long-term strategic interests in Eurasia would suggest that a good relationship with Russia ought to be as important an objective of Australian diplomacy as it ought to be of American diplomacy: the power that stands to gain most from the crisis in Ukraine is neither Russia nor America but China.

The so-called New Cold War between Russia and the West is fast providing the world's "loneliest emerging superpower" with its first great-power ally.

We've long believed that we have, proverbially, "no interests in Europe".

Turns out we do.

In the long run, anger, however righteous, isn't a substitute for doing our homework.

Matthew Dal Santo is a freelance writer and foreign affairs correspondent. He previously worked for the Department of Foreign Affairs and Trade. This article first appeared in ABC’s The Drum here.