The Mighty A-4 Skyhawk Was the U.S. Navy’s Best Little Bomber 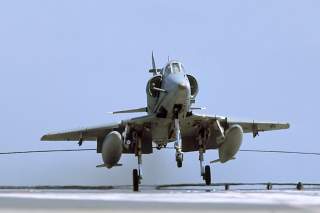 On Aug. 2, 1990, Saddam Hussein’s army stormed into the tiny kingdom of Kuwait with 120,000 troops and 300 tanks. While the invasion certainly shocked the world, the Iraqis did not roll in completely unopposed. Among the first responders were Kuwaiti air force A-4KU Skyhawks, which took off under artillery bombardment and lashed out at the invaders.

By the time the little jets and their pilots evacuated Kuwait – some landed on highways after their bases were overrun – they had gunned down a third of the nine Iraqi helicopters reported destroyed, and wrecked an unknown number of Iraqi vehicles.

Small, nimble and simply built, the Douglas A-4 Skyhawk served the U.S. Navy and Marine Corps from 1956 onward for nearly 40 years. Built as a nuclear-attack capable light bomber, Skyhawks incurred the highest losses of any Navy aircraft during the Vietnam War.

A-4s sustained the heaviest casualties of all aircraft types in Israel’s air force during the 1973 Yom Kippur War. In the Falklands War of 1982, Argentina sent its A-4s on virtually suicidal missions to bomb British warships.

Originally called the A4D before the 1962 designation standardization in line with the Air Force, the Skyhawk was developed as a jet powered replacement for the propeller driven AD (or A-1) Skyraider. The new aircraft had to be small and light enough to land on World War II-era Essex-class aircraft carriers which were still a significant presence in the U.S. Navy in the 1950s.

Douglas chief engineer Ed Heinemann, whose design credentials included the SBD Dauntless dive bomber and the Skyraider, was ruthless in achieving the Navy’s parameters. Accepted into Navy and Marine Corps service in 1956, the Skyhawk was so small that it did not require folding wings for parking on aircraft carriers.

The first two production variants were so rudimentary they did not have any radar. The cockpit sidewalls were so tight that the shoulders of pilots’ flight suits rapidly wore away from the constant rubbing. Pilots occasionally taped felt strips to their helmets to avoid scratching the canopy glass.

If an A-4 driver wanted to check his six, he had to maneuver the aircraft since he could barely turn his head.

While diminutive, the Skyhawk was popular, nimble and responsive – and it could carry up to 9,900 pounds of bombs, rockets and missiles. Each wing root mounted a Mk 12 20-millimeter cannon for strafing. The guns were not particularly useful for air combat since the Skyhawk mounted a fixed gunsight without lead computing. Worse, its guns had a tendency to jam.

But the warplane still packed a punch. The upgraded A-4E and its successors possessed five ordnance hardpoints over the three preceding versions, increasing the plane’s choice of munitions. Ground crews adored the simplicity of the A-4’s internal architecture, though they needed a ladder to reach the plane’s upper surfaces — a minor annoyance.

When America entered the Vietnam War, the A-4 was the U.S. Navy’s most numerous attack aircraft. The most prevalent model was the A-4C, followed closely by the A-4E model. Newer A-4Fs, which introduced a conspicuous avionics hump on the plane’s spine, debuted in late 1967. The Marines also flew two-seat TA-4F trainers as airborne forward air controllers.

As an everyday participant in ground attack missions over both North and South Vietnam, A-4s made up 37 percent of U.S. Navy aircraft losses and 36 percent for the U.S. Marines. Such was the near universal presence of the Skyhawk in Vietnam that we can only list a small sample of milestones:

- On Aug. 5, 1964, the first American pilot taken prisoner by North Vietnam, Elverett Alvarez, was shot down in an A-4C during Operation Pierce Arrow, the American retaliatory strikes for the second Gulf of Tonkin incident.

- Cmdr. James Stockdale, the highest ranking aviator taken prisoner in North Vietnam, was shot down in an A-4E in September 1965. He was later awarded the Medal of Honor for his conduct as a prisoner of war.

- The only other fixed-wing recipient of the Medal of Honor was a Skyhawk aviator. Capt. M.J. Estocin’s posthumous Medal of Honor was awarded on the basis of two incidents in April 1967 when his crippled aircraft held together long enough to launch Shrike missiles at SAM batteries. Estocin managed to nurse his trashed A-4 back to his carrier on the first occasion. The second one claimed his life.

- John McCain, now a serving senator, was flying an A-4E when he was shot down in October 1967 and captured.

- An A-4C shot down a North Vietnamese MiG-17 with Zuni rockets in May 1967, a weapon never designed for air-to-air combat.

In 1967, the Vought A-7 Corsair II – essentially a squashed down F-8 Crusader offering superior range and payload capacity – began to supplant the A-4 in the light attack mission.

However, the chubby Corsair II could not take off from the Navy’s Essex-class carriers, so the A-4 did not go away entirely. The Marines never adopted the A-7 during or after Vietnam, the justification being that the A-7 was too expensive and unable to tolerate short, improvised runways like the A-4.

While the slow but solidly built A-1 Skyraider is often said to be the U.S. military’s favorite Vietnam-era fixed-wing aircraft for close air support, these propeller planes were usually assigned to U.S. Air Force special operations squadrons not normally available to regular Army and Marine infantry formations.

The subsonic Skyhawk, however, was the next best warplane for delivering accurate ordnance in close proximity to friendly troops compared to the faster F-4 Phantom, F-100 Super Sabre or F-8 Crusader.

In 1969, the U.S. Navy opened its “Top Gun” weapons school – where the simulated opposition adopted Soviet-style tactics against trainee aviators. It was not possible to acquire original Soviet aircraft, but the A-4 was a near perfect facsimile for the subsonic MiG-17F.

Like a knife-wielding street brawler lunging inside the guard of a swordsman, the A-4 could replicate the little MiG’s ability to slip inside the turning circle of the F-4 Phantom. Michael Ironside flew an A-4 in the movie Top Gun as “Jester” where he tussled with Tom Cruise’s F-14. Several A-4Fs were turned into virtual flying engines by removing their avionics hump, guns and most of their hard points. The resulting “Super Fox” could roll at 720 degrees a second.

Israel, one of the Skyhawk’s numerous overseas customers, relied heavily on the plane from 1969 to 2006. Israel had originally flown French-made jets, but these were getting old and the supply of spare parts was drying up since Paris had embargoed further arms supplies to Israel in the 1960s.

The A-4H was the first U.S.-made military aircraft adopted by the Israeli Air Force — this was an A-4F based export variant peculiar to both Israeli requirements and American export caveats. It added on a braking parachute but lacked the A-4F’s avionics hump, rear-facing radar warning receivers and the fire control systems to perform loft bombing.

America also barred certain ordnance types, such as napalm, AGM-12 Bullpup missiles and Rockeye cluster bombs from export to Israel. Only in 1970 did Washington allow sales of AGM-62 Walleye guided bombs and AGM-45 Shrike anti-radiation missiles in exchange for Israel’s acceptance of the ceasefire ending the War of Attrition with Egypt.

A-4Hs could be externally distinguished by the straight cut of the vertical stabilizer which would feature on the later U.S. Marine Corps A-4M — earlier versions had a pointed stabilizer. Since ground strafing against parked aircraft had been a favored tactic of Israeli aviators during the 1967 Six Day War, the original 20-millimeter Mk 12 cannons were exchanged for 30-millimeter DEFA cannons from 1969 onward as their heavier shells offered more destructive effects on target.

While the IAF’s Skyhawks had already dropped bombs during the War of Attrition and blown up Palestine Liberation Organization base camps in Jordan and Lebanon, the Yom Kippur War of 1973 would be the aircraft’s toughest test. Unlike the Six Day War, Israel demurred from launching pre-emptive raids on Egyptian or Syrian air bases since it would lose U.S. diplomatic backing for shooting first.

This resulted in the Israelis not achieving air superiority against their Arab enemies when Egypt and Syria assaulted the Sinai and Golan Heights, respectively. Israeli Skyhawks – which now included ex-U.S. Navy A-4E and faster, newly built A-4N variants – were forced to fight past formidable Egyptian air defenses and MiG-21 interceptors while targeting Arab ground forces. This was to buy time for Israeli reservists to mobilize.