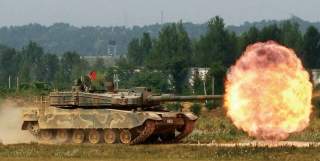 The Republic of Korea Armed Forces, South Korea’s military, is the second-largest military on the Korean Peninsula and yet it is the least well known. Not as widely discussed as the U.S. military or Pyongyang’s Korean People’s Army, the ROK military is probably the most powerful armed force on either side of the DMZ. South Korea’s armed forces have evolved from a prewar constabulary force to a dynamic, self-equipped military equal to most Western armed forces.

The original ROK Armed Forces were formed shortly after the creation of the Republic of Korea in 1948. The armed forces initially consisted of an army that was more of an armed police force, an air force of light observation aircraft and no real navy to speak of. Small and lightly armed, it was no match for the North Korean People’s Army that surged across the border in June 1950. The Korean War saw U.S. advisors and equipment flow to build the ROK military into a force that could defend its own country, and by 1965 the army and marine corps were strong enough to send two combat divisions and a marine brigade to Vietnam. Over a nine-year period, three hundred thousand ROK personnel were rotated through Vietnam, where they earned a reputation for being tough guerrilla fighters.

The ROK Army, the largest of the services, has the crucial role of manning the 160-mile-long demilitarized zone that divides the two Koreas. The ROK Army has an active duty strength of 495,000 soldiers, larger than the U.S. Army, prompting one U.S. general in charge of UN forces in the country to quip, “My army is larger than my Army.” The army is divided into forty-nine divisions and nineteen separate brigades. The army also has seven special-forces brigades, a special-operations-capable special missions battalion, and an overseas operations group. The army relies on conscription to keep personnel costs low, paying an average of just $100 per month to draftee privates serving a twenty-one-month term.

The army is highly mechanized, with an estimated 2,400 tanks, 2,700 armored vehicles, 3,300 howitzers and multiple rocket launchers, and more than six hundred reconnaissance, attack and transport helicopters. While much of the equipment is American made, an increasing amount, including the K-2 Black Panther main battle tank, K21 infantry fighting vehicle and K-9 Thunder self-propelled howitzer, are of local manufacture.

While just half the size of the North Korean People’s Army by personnel strength, the ROK Army is much better armed and equipped. KPA forces would have a very difficult time breaching frontline ROK defenses, hence the KPA’s emphasis on infiltration and attacks throughout the theater to throw South Korean defenders off balance.

The second largest service is the ROK Navy, with seventy thousand personnel. As a country located on a peninsula with a maritime tradition, by all rights South Korea should have its navy be the largest service, but the threat of North Korean invasion keeps the army at outsized levels. In the meantime, the ROK Navy is trying to juggle global blue-water ambitions and the threat posed by North Korea’s brown-water force of small coastal craft and submarines.

That juggling act is illustrated in the makeup of the ROK Navy itself. The navy has twelve destroyers, including three of the Sejong The Great–class guided-missile destroyers. Equipped with the Aegis combat system and a staggering 128 vertical-launch silos, more than the U.S. Arleigh Burke class, the Sejong the Great destroyers are also scheduled to incorporate ballistic-missile defense capability via an upgrade to their Aegis systems. The navy also has thirteen frigates capable of worldwide operations. The feather in the ROK Navy’s cap is the Dokdo-class amphibious vessel, with a second ship recently announced. The Navy also has dozens of smaller patrol craft capable of fighting North Korea’s fleet of gunboats.

Like the United States, the Republic of Korea also has a marine corps nestled within the navy. The ROK Marine Corps is twenty-nine thousand strong, divided into two amphibious divisions and a separate brigade. The ROKMC is responsible not only for amphibious warfare but for also repelling amphibious attacks against the many populated islands alongside the Northern Limit Line. Two ROK Marines died in the bombardment of Yeonpyeong Island in 2010 by North Korean forces.

The ROK Navy has fewer ships than the Korean People’s Navy, but on average each ship is much larger and considerably more capable. In the event of war, the ROK Navy would likely quickly subdue the KPN, winning the war at sea, although the North’s submarine force may be a problem.

The ROK Air Force is the smallest of the three services. Just sixty-five thousand serve in the ROKAF, but the service punches above its weight in terms of sheer firepower. The service has sixty F-15K twin-engine multirole fighters, 118 KF-16 single-engine multirole fighters and sixty T-50 light multirole aircraft. In addition, the service has forty F-35A Joint Strike Fighter aircraft on order and is pushing for the development of the KF-X, Korea’s first indigenous fighter.

The ROKAF also has a substantial number of support aircraft geared to support war on the peninsula. To facilitate wartime command and control, the ROKAF has four E-7A “Peace Eye” airborne early-warning and control aircraft, with another two on order. It also has eight RC-800 signals-collection aircraft for intelligence missions and four RQ-4 Global Hawk high-altitude long-endurance spy drones on order. The air force lacks tankers, but most if not all wartime missions can be accomplished without them. If necessary, the ROKAF could count on U.S. Air Force tanker support.

The Republic of Korea Armed Forces may be smaller than the Korean People’s Army, but on the whole it is substantially more capable. Tough and flexible, the three services present a powerful deterrent to northern invasion. Indeed, a collapse scenario in Pyongyang could see the ROK Armed Forces move north to stabilize the hungry, impoverished remnants of a nuclear-armed state. In any case, Seoul’s military has its job cut out for it. All indications are that it is up to the task.