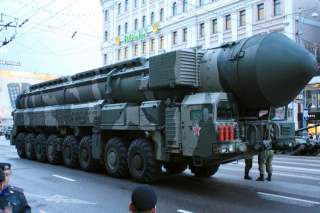 A new NATO missile defense base in Romania recently became operational, which has revived an erroneous debate about whether the step significantly alters nuclear parity between NATO and Russia.

Discussions about NATO's current missile defense capabilities are a distraction from Moscow's actual concerns about future missile defense deployments and its argument for establishing technical 'legal guarantees' to reduce uncertainties and prevent an arms race. Risks from any escalation of tension do not derive from disagreement with Russia over the merits of its security concerns. Rather, Russia's arguments have not been addressed and discussions on the prospect of an international treaty to regulate and set an upper limit for missile defense capabilities has been absent.

The threat of missile defense gradually making first-strike dynamics favorable to a second-strike could have disastrous impact on decision-making during heightened tensions between NATO and Russia. This is not a new or controversial argument as it was the reasoning behind the US-Soviet Anti-Ballistic Missile (ABM) Treaty in 1972. The unilateral US withdrawal from the ABM in 2001 to establish a "limited missile defense system' did not produce a new international treaty to ensure it would remain 'limited." As former French President Jacques Chirac warned, missile defense could "pave the way" for unlimited and unconstrained development of an "even more ambitious system." Walter Slocombe, the former US Under Secretary of Defense, encouraged more recognition for "the more understandable Russian fear that once the US commits to a partial defense, it will inevitably proceed to technologies and scales of deployment that could conceivably put Russian retaliatory capabilities at risk."

History demonstrates that when a new weapons technology is introduced, the technology and deployments are initially rudimentary and ineffective. Focus should therefore be devoted to their likely evolution as the first deployments often serve the function of establishing a platform for future advancements.

President Vladimir Putin unmistakably articulated Russia's concerns in his renowned 2007 speech in Munich, positing that "today this system is ineffective but we do not know exactly whether it will one day be effective." A few months later the US Secretary of State, Condoleezza Rice, ridiculed Russian concerns about the existing plans to deploy 10 interceptors in Poland as being "purely ludicrous and everybody knows it." The Russian Foreign Minister, Sergei Lavrov, explicitly referred to expected enhancements: "most likely in the foreseeable future we will hear about hundreds and even thousands of missile interceptors in various parts of the world, including Europe. Poland, it is only a trial balloon."

This prediction soon materialized as the planned interceptive missiles increased beyond 500.

The gradual expansion of missile defense capabilities is not a possible unintended development, but rather a planned approach of continuously upgrading the system as new technology and funding becomes available. The former US Secretary of Defense Donald Rumsfeld, explained in 2003: "We have instead decided to develop and put in place a rudimentary system by 2004 . . . and then build on that foundation with increasingly effective capabilities as the technologies mature." NATO's Phased Adoptive Approach perpetuates this model by gradually enhancing the capabilities of the missile defense system in various phases, while refusing to set upper limits on the potential potency of the system.

Much like the gradual expansion of NATO membership, the incremental expansion of missile defense has the effect of diminishing domestic and international opposition as the water gradually grows warmer.

Following the US unilateral withdrawal from the ABM Treaty in 2001, there was potential for replacing it with a new international agreement to ensure the deployments would remain limited. Washington's withdrawal was vehemently detested across Europe and the fears echoed Russian sentiments. The decision to make missile defense a NATO asset diminished the prospect for developing an international treaty with Russia. NATO is adamant to remain the dominant security institution in Europe by opposing any international agreements or "legal guarantees" that could give Russia a 'veto' on the continent. As a senior European diplomat argued: "the Russians are right on the substance of missile defense, but . . . We cannot be seen as giving them a veto on these types of issues."

By conflating compromise with appeasement, international treaties are perceived as diluting the authority and autonomy of NATO as the foundation for European security. As stated by the former US Ambassador to Russia, Michael McFaul: "we are going to accept no limitations on that whatsoever . . .  we are going to build whatever missile defense system we need." Eradicating any possible ambiguity, he continued by arguing "we're not going to reassure or give or trade anything with the Russians regarding NATO expansion or missile defense." The previous opposition by major European capitals to missile defense was subverted as "alliance solidarity," limiting the scope for political pluralism.

Wikileaks cables demonstrate that this was a deliberate strategy by Washington. The former US Ambassador to Norway, Benson Whitney, reported that the US was mounting pressure on the Norwegian Government to reverse its position on missile defense "to avoid damaging alliance solidarity." The US Ambassador later confirmed that Norway had to "adjust to current realities" and the country had a "hard time defending its position if the issue shifts to one of alliance solidarity."

The new missile defense base in Romania signifies another step towards a precarious and unpredictable nuclear confrontation with Russia. The repudiation of the pending nuclear stand-off by referring to the current capabilities of the Romanian base alone should be interpreted as evidence that the world's largest military alliance is sleepwalking into another conflict. The obvious puzzle is that despite the possible calamitous ramifications, there is virtually no discussions about the merits of Russia's arguments concerning future capabilities, and a categorical rejection of any international treaties that could limit NATO's autonomy.