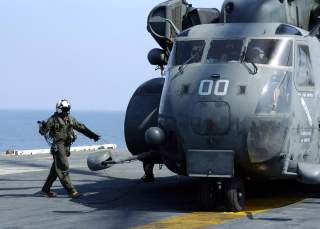 The King Stallion’s costs will likely only grow. After the CH-53K successfully pulled off its first cross-country flight last summer, Naval Air Systems Command announced its first official production contract for two helicopters for $303.97 million, or just under $152 million for each aircraft, “along with engineering and integrated logistics support, spares, and peculiar support equipment.”

The CH-53K King Stallion heavy-lift helicopter is on track to enter arsenals around the world within the next few years — but it’ll cost militaries a pretty penny.

Marine Corps officials announced early this month that the CH-53K was on track to enter service sometime in 2019 as a replacement for the existing CH-53 Echo fleet. Weeks later, manufacturer Sikorsky debuted the CH-53K at a German air show in a move that, per Aviation Week, signals that the defense contractor is “preparing to fight for export orders.” Both are signs of the King Stallion’s imminent arrival downrange after more than a decade in development.

“[This is] the most powerful helicopter the United States has ever fielded,” CH-53 program chief Marine Col. Hank Vanderborght told the audience at the annual Sea-Air-Space expo on April 9, per Military.com. “Not only the most powerful, the most modern and also the smartest.”

But boy, the King Stallion is expensive as hell. Back in April 2017, a leaked decision memo revealed that each CH-53K would cost around $138.5 million; a month later, that figure had ballooned to $144 million apiece. All of these figures are well above the multimillion-dollar price tag of the notoriously garbage F-35A Lightning II joint strike fighter, which has seen its price decline in recent weeks.

The King Stallion’s costs will likely only grow. After the CH-53K successfully pulled off its first cross-country flight last summer, Naval Air Systems Command announced its first official production contract for two helicopters for $303.97 million, or just under $152 million for each aircraft, “along with engineering and integrated logistics support, spares, and peculiar support equipment.”

Then again, the King Stallion might just be worth the eye-popping price tag. Sikorsky engineered the CH-53K to haul up to 27,000 pounds, three times the cargo of the Pentagon’s current heavy-lift workhorse, without any significant changes in the airframe dimensions. And that makes a difference downrange, as Task & Purpose’s Brian Jones wrote of the King Stallion in March:

When I was in Afghanistan from 2011 to 2012, the CH-53 was so critical to combat operations it was the only squadron the Marine Corps kept two iterations of. The 2nd Marine Aircraft Wing (Forward) had a CH-53E Super Stallion squadron and a CH-53D Sea Stallion squadron. But both versions of the aircraft were decades old, but were incredibly busy across the theater of operations. Those platforms desperately need to be upgraded.

The new CH-53K King Stallion certainly seems to be an excellent iterative development of this combat-tested and combat-proven platform. The new helicopter can hoist an external payload of more than 27,000 pounds, more than triple what the CH-53E could do. While the old version, the CH-53E, was just barely too thin to hold a Humvee in its fuselage, the new helicopter can hold a Humvee.

It’s also worth noting that unlike other uber-expensive next-generation military projects, the King Stallion isn’t a complete garbage pile (see: the Littoral Combat Ship). Sure, the program has its set of very special technical problems — airspeed indication anomalies, reliability issues in the rotor gearbox, and tail boom and rotor structural problems, according to a 2017 DoD report — but the airframe has demonstrated mission reliability beyond expectations for this point in its development lifecycle.

“I am proud of what the team has negotiated to bring this remarkable and unrivaled helicopter one step closer to the fleet,” Vanderbrough said of the airframe in September. “Future Marines, not even born yet, will be flying this helicopter well into the future.” Here’s hoping he’s right.