The Navy Is Getting Ready for Amphibious War 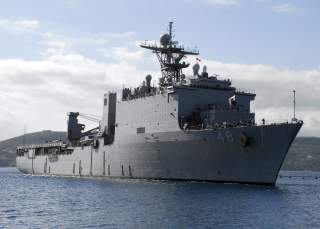 The Navy is seeking to accelerate delivery of a new, multi-mission amphibious assault ship designed to function in a modern threat environment, conduct a wider range of missions than the ship it is replacing, and help the service increase the lagging number of amphibs in the force, senior service officials said at the 30th Surface Navy Association’s National Symposium in Virginia.

The structure and technology of new ship, called the LX(R), is loosely based on an LPD 17 hull - yet engineered with a wider sphere of technologies intended to address new threats posed by near-peer adversaries.

The Navy plans to build at least 11 new LX(R) ships, with the first one slated to deliver by 2026, service developers said.

Metcalf stressed that the emerging LX® is an integral part of the Navy’s amphibious assault strategy for the future, a series of emerging concepts oriented toward better positioning the service to engage successfully in full-scale open water amphibious warfare against a technologically advanced enemy.

The Navy hopes to add much greater numbers of amphibious assault ships to the fleet while simultaneously adjusting to a modern threat landscape which will require more dis-aggregated operations - and require single Amphibious Ready Groups (ARG) to perform a much wider range of missions.

“The CDD (capabilities development document) says the LX® is required to operate independently, so we have maintained an aviation capability and a hospital capability is being preserved. The ship will also be engineered with C4ISR coms so that it can operate if it is without an LHA (main amphibious assault ship in an ARG),” said Metcalf.

Additional command and control capabilities, such as communications technologies, will allow the ship to reach back to the joint force headquarters they are working for, stay in with the parent ship and therefore help control the landing force, Metcalf explained.

Having more amphibs engineered and constructed for independent operations is seen as a strategic advantage in light of the Pacific rebalance and the geographical expanse of the region. Described often by planners in terms of a “tyranny of distance,” the widely dispersed territories in the Pacific may require a greater degree of independent amphibious operations where single amphibs operate separately from a larger ARG.

The Navy plans new LX(R) amphibs to replace its current fleet of Dock Landing Ships, or LSD 41s, which have functioned for years as a support ship in an ARG. This strategic move to replace Dock Landing Ships with an LPD 17-like hull seems to speak to a Navy effort to expand amphibious capability to adjust to new threats and help compensate for a continued Navy amphibious assault ship deficit.

The Navy used to be able to deploy up to five ARGs at one time, however the fleet is no longer the size it used to be in the 1980s and the service is working on a strategy to get by with fewer ARGs and as fewer amphibs overall, Navy developers have told Warrior Maven.

The modern threat environment contains a wider range of contingencies to include counterterrorism operations, counter-piracy,

humanitarian missions, disaster response and, of course, full-scale amphibious combat operations against near-peer adversaries. This requires that the three ships in an ARG have an ability to disperse when necessary and operate independently.

Navy and Marine Corps developers explain this in term of how modern missions are expected to increasingly require more split or disaggregated operations.

A lead Amphibious Assault Ship, a Dock Landing Ship, or LSD, and the San Antonio-class LPD 17 amphibious transport dock are both integral to an Amphibious Ready Group, which typically draws upon a handful of platforms to ensure expeditionary warfighting technology. The ARG is tasked with transporting at least 2,200 Marines and their equipment, including what’s called a Marine Expeditionary Unit, or MEU.

The 684-foot long LPD 17s can hit speeds of 22 knots and carry four CH-46 Sea Knights or two MV-22 Osprey aircraft. The LSD, or Dock Landing Ship, also travels around 20 knots however it is only 609-feet long and not equipped to house aircraft.

While the mission of the existing Dock Landing Ship (LSD) is primarily, among other things, to support an ability to launch Landing Craft Air Cushions, or LCACs, for amphibious operations, the new LX(R) ship will have an expanded mission to include more independent missions. LCACs are ship to shore connector vehicles able to transport Marines and equipment from ship-to-shore beyond the horizon. LCACs can even carry M1 Abrams tanks over the ocean.

An Amphibious Transport Dock, or LPD, is designed to operate with greater autonomy from an ARG and potentially conduct independent operations as needed. An LSD is able to operate four LCACs and the more autonomous LPD 17 can launch two LCACs.

Developers explain that the LX(R) ship will have a much wider mission set than the fleet of LSD ships it is replacing.

Corps officials explain that the greater use of amphibious assault ships is likely as the Marine Corps continues to shift toward more sea-based operations from its land-based focus during the wars in Iraq and Afghanistan.

At the same time, Navy and Marine Corps leaders are quick to acknowledge that there is a massive shortfall of Amphibious Assault Ships across the two services. In recent years, senior service leaders have said that if each requirement or request for amphibs from Combatant Commanders worldwide were met, the Navy would need 50 amphibs.

The Navy currently operates only roughly 30 amphibs and plans to reach 38 by the late 2020s.