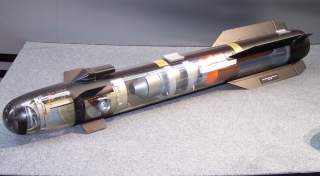 The United States Navy’s Naval Air Systems Command (NAVAIR) has completed its first flight test of the Joint Air-to-Ground Missile (JAGM) onboard a AH-1Z Viper attack helicopter last year on December 5 at Naval Air Station Patuxent River in Maryland. According to NAVAIR, during the sortie, the AH-1Z aircrew navigated the missile through “various operational modes” and “exercised its active seeker to search and/or acquire targets, demonstrating its compatibility with the aircraft.”

The new weapon seems to be performing as well as the Navy hopes, but it is still relatively early in the test program. “Initial results from the flight indicate the missile performed as planned,” Liam Cosgrove, NAVAIR’s JAGM flight test lead, said. “We will continue to conduct a series of tests to prepare for live fire testing of the JAGM off the AH-1Z scheduled for early this year.”

As NAVAIR explains, the JAGM is a so-called joint program in partnership with the U.S. Army. If and when the JAGM becomes an operational weapon, it will offer the Pentagon a precision-guided capability for use against high value stationary, moving and relocatable land and sea-based targets.

To accomplish those missions with a single weapon, the JAGM uses a multi-mode seeker to provide targeting day or night in adverse weather, battlefield obscured conditions and against a variety of countermeasures according to the Navy. “This missile will provide increased lethality and better targeting capabilities, beyond the Hellfire’s laser point designating capability that the AH-1Z currently has in theater today,” Capt. Mitch Commerford, NAVAIR’s Direct and Time Sensitive Strike (PMA-242) program manager, said.

If the weapon proves to be successful, the Army and the Navy will gain a weapon that offer capabilities that far exceed today’s Hellfire. While the Army and Marine Corps’ Boeing AH-64 Apache and Bell AH-1Z fleets will be the first to use the new missile the weapon could be used by any aircraft that can carry the Hellfire missile. Thus, there are a range of platforms include the General Atomics MQ-9 Reaper that could make use of the JAGM.

Under the Pentagon’s current plans, the Army will complete a 48 shot test matrix by May 2018 onboard an AH-64 Apache aircraft in support of Milestone C decision to produce and deploy the JAGM. While theoretically the Pentagon could shelf the weapon, it is a foregone conclusion that the weapon will be approved for production.