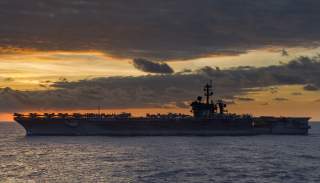 The US Navy proposes to spend US$299 million in FY2019 on developing laser systems that can defend its ships against current and future threats.

USNI News says the funds, which are yet to be approved and were included in a budget document issued earlier this month, are intended to move naval laser systems a step closer to deployment. The “rapid prototyping, experimentation and demonstration initiative” is also aimed at developing laser weapons that can counter Chinese anti-ship missiles like the DF-21D and unmanned aerial vehicles (UAVs)

One navy challenge is that current shipboard defenses cost much more than the anti-ship missiles and UAVs that potential foes like China and Russia have in their arsenal. Navy ships also carry only limited stores of surface-to-air missiles (SAMs) and ammunition for close-in weapons like Phalanx CIWS gun systems. SAMs can also cost more than a million dollars each.

“But in combat scenarios (or an ongoing military capabilities competition) against a country such as China that has many UAVs and anti-ship missiles and a capacity for building or acquiring many more, an unfavorable cost exchange ratio can become a very expensive – and potentially unaffordable – approach to defending Navy surface ships against UAVs and anti-ship missiles,” the CRS report said.

Lasers, on the other hand, can be fired for less than one dollar a shot if onboard power supply issues on navy ships can be resolved, according to experts.