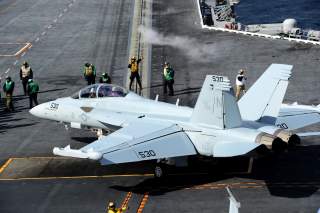 Northrop Grumman is trying to convince the U.S. Navy to transform the branch’s EA-18G Growler electronic-warfare planes into motherships for small, slow-flying unmanned aerial vehicles that could extend the distance at which Growler crews can pinpoint enemy radars.

The 12-foot-long “Dash X” drone fits inside the military’s Tactical Munition Dispenser. Deployed mid-flight and extending pop-out wings, the Dash X flies under its own power at a top speed of just 70 miles per hour. The drone carries an array of sensors and datalinks.

The UAV’s slow speed is actually an advantage, John Thompson, a Northrop campaign director, told reporters in early December. “It is actually survivable because it is absolutely so slow and so small, when you think about how military systems are designed, they’re designed to shoot down tactical jets and you’re actually build into radars gates that take away things just as birds,” Thompson said.

Northrop, the Navy, the Office of Naval Research, the Office of the Secretary of Defense, North Carolina State University and the University of South Carolina are all collaborating on the Dash-X effort. They built two airframes for testing and, in October, sent the two drones on a mock reconnaissance mission alongside a Bombardier test plane acting as a surrogate EA-18G.

“We did a demonstration where these [the Dash X] flew forward, looked for an unlocated [radio-frequency] object,” Thompson said. “They went out and they found that vehicle. They listened for the whispering and they pulled it back to this test airframe and they were able to detect, identify and geolocate.”

Dash Xs could help Growlers to stay beyond the range of enemy surface-to-air missiles during dangerous air-defense-suppression missions. The Navy is reportedly considering adding the drone to its 138 EA-18Gs as part of the Block-II upgrade program.

The Dash X is just the latest initiative aiming to combine manned warplanes and small drones. The Defense Advanced Research Projects Agency has begun work on a small drone that doubles as a weapons pylon in order to extend the range of air-to-air munitions. A fighter launches the Flying Missile Rail drone, which travels a certain distance before firing its missiles.

None of the fighter-drone pairings is operational yet. All face funding, testing and conceptual challenges. But Dash X stands a good chance of eventually make its way into the fleet, Thompson said. Northrop’s collaboration with the Navy gives the drone the “highest probability of fielding.”