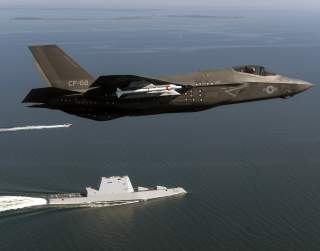 The United States Navy and the Raytheon have completed integrating the AGM-154C Joint Standoff Weapon (JSOW) onto the Lockheed Martin F-35C Joint Strike Fighter. The addition of the 70-nautical mile standoff range JSOW paired with the stealthy F-35C will afford the Navy the ability to strike targets deep inside even the toughest enemy air defenses.

"With JSOW-C in its internal weapons bay, the Navy's F-35C can now eliminate the toughest ground targets from significant standoff ranges," Mike Jarrett, vice president of Raytheon Air Warfare Systems, said.  "JSOW's advanced warhead and smart fuse provide fighter pilots with plenty of flexibility against hard and soft targets — plus, it has many programmable effects."

The JSOW is a glide weapon that uses a combination GPS-inertial navigation guidance system coupled with an imaging infrared seeker that can identify and track targets autonomously according to Raytheon. The JSOW-C—the version that is being integrated onto the F-35C—weighs 1,000 pounds and is “effective against high-value land targets at ranges greater than 70 nautical miles, day or night, and in adverse weather conditions.”

The JSOW—which integrates a dual-charge BROACH warhead with a WDU-44 shaped augmenting warhead and a WDU-45 follow through bomb—is particularly adept at cracking open high value hardened targets. Thus, the U.S. Navy has insisted on the integration of the JSOW-C into the internal weapons bay of its only stealth aircraft.

Moreover, while the F-35C is a stealthy strike aircraft, given the performance of some of the most modern enemy air defense systems that are entering service or that are projected to enter service, even the Joint Strike Fighter will have to use standoff weapons to ensure survivability as time goes on. Thus, there is a premium for increasing standoff capability.

Given the increasing premium on range, last year in June the Navy award Raytheon a contract to fund testing on a new extended range jet-powered version of the JSOW that the company had developed using its own money. The extended range JSOW-ER has been tested out ranges as great as 264 nautical miles, which is nearly four times the range of the conventional JSOW-C. The testing was supposed to have been completed by this March, however, it is not clear that the Navy has completed those tests.

The addition of the JSOW-ER—should the Navy chose to eventually buy and field that weapon—would be extremely useful for the carrier air wing. With a 300 nautical mile range standoff range, the Boeing F/A-18E/F Super Hornet—which will make up the bulk of the carrier air wing into the 2040s—equipped with the JSOW-ER would be able to engage targets protected by advanced air defenses such as the Russian-built S-300V4 or S-400. Both of those enemy weapons have ranges beyond 250 nautical miles.

Thus, standoff weapons such as the JSOW-ER could be what keeps the carrier air wing relevant into the future as advanced air defenses proliferate around the world. Indeed, such weapons might be the key to keeping non-stealthy fourth generation fighters relevant for all of the world’s air forces.